The Specific Carbohydrate Diet (SCD) is an extremely restrictive diet that removes specific carbohydrates (polysaccharides, some oligosaccharides, disaccharides and polyols), and has been designed to help people with conditions such as celiac disease, chronic diarrhea, diverticulitis, cystic fibrosis, and inflammatory bowel diseases (IBD) like ulcerative colitis, and Crohn’s disease. Some people believe this diet helps also with SIBO and with the GI (gastrointestinal) problems that some children with autism have.

Mostly, the support and recommendations for the Specific Carbohydrate Diet come from testimonials, and there are only a few small clinical studies according to which the diet might be efficient in helping to control some gastrointestinal conditions. That has to be said that the most rigorously studied dietary therapy is Enteral Nutrition Therapy (ENT). ENT has also been accepted as a successful therapy in 80% of children.

Therefore, although the results of the early stage research show potential benefit, more research is still needed to confirm the effectiveness and safety of Specific Carbohydrate Diet (SCD).

But in 1987, Elaine Gottschall, a biochemist, and the mother of one of Haas’s patients, published “Breaking the Vicious Cycle”, after her daughter’s IBD (inflammatory bowel disease) improved with use of the Specific Carbohydrate Diet (SCD). Since then the diet is more widely known (1, 3, 11).

Below you can read about the theory behind the Specific Carbohydrate Diet, in which conditions it might be beneficial, general overview how to implement SCD, and a general outline of what foods are allowed (legal) and not allowed (Illegal) on the SCD.

However, if you decide to follow this diet, you should read the book “Breaking the Vicious Cycle” which also includes recipes, and consult your doctor. 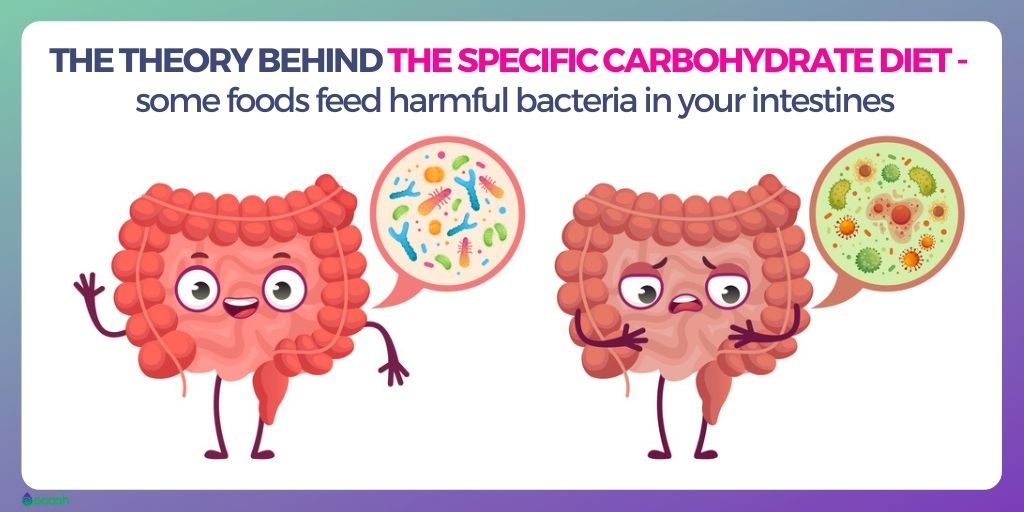 The Theory Behind The Specific Carbohydrate Diet – What is SCD and How the Diet Works?

The theory behind the Specific Carbohydrate Diet (SCD) is that some complex carbohydrates (disaccharides (double molecules) and polysaccharides (chain molecules)) are not fully digested by your body and feed harmful bacteria in your intestines. That’s why these types of carbs are not allowed (illegal) in this diet, as giving more food to the harmful bacteria leads to their overgrowth, and increase in waste products produced by bad bacteria.

This overgrowth of harmful bacteria can set off the chain reaction or “vicious cycle,” which leads to irritation and inflammation of the intestine wall. Therefore, The Specific Carbohydrate Diet is intended to work by starving out these bad bacteria, and rescue the balance of bacteria in your gut.

The only carbohydrates you can eat in this diet are monosaccharides that have a single molecule structure that allows them to be easily absorbed by the intestine wall.

According to the theory, over millions of years people have evolved to eat predominately fish, meat, eggs, vegetables, nuts, and low-sugar fruits in contrast to the diet of nowadays (that has only been around for a mere 10,000 years) that includes grains, starches, legumes, pasta and breads.

Moreover, according to the theory, the increase in chemical additives and complex sugars in the modern diet has led to an enormous increase in health issues ranging from obesity to serious bowel disorders and brain function disorders. Therefore, the allowed foods in Specific Carbohydrate Diet are mostly those that early humans ate before the beginning of agriculture (1, 3). 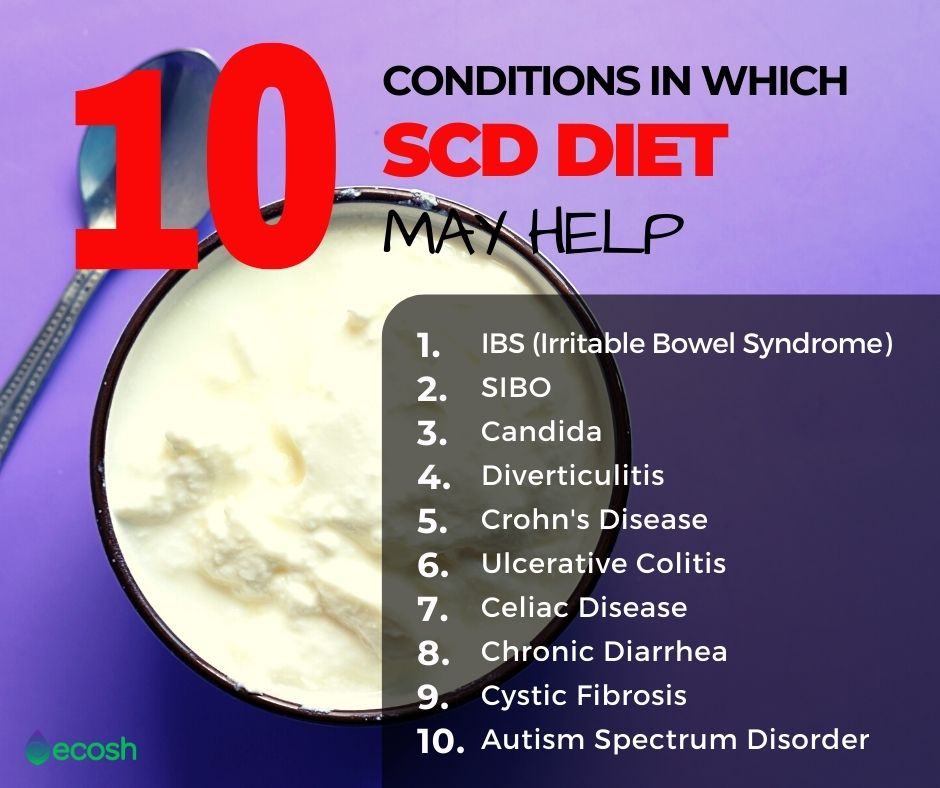 Who is the Specific Carbohydrate Diet (SCD) For? 10 Conditions in Which SCD May be Helpful

Some people believe this diet may also help treat SIBO, GI (gastrointestinal) problems that some children with autism have, and other autism symptoms. However, more research is needed to confirm its effectiveness and safety (3, 6).

Proponents of SCD believe this diet may be a natural therapy for numerous conditions described below.

According to one study, the Specific Carbohydrate Diet has been shown to be effective for the treatment of IBS (irritable bowel syndrome), which is a chronic long-term disorder that causes symptoms such as bloating, gas, cramping, abdominal pain, diarrhea, constipation, or sometimes even both.

Often people who suffer from IBS also suffer from SIBO (sometimes also called blind loop syndrome). This happens when there is an anomalous increase in the general bacterial population in the small intestine (especially types of bacteria that are usually not found in that part of the digestive tract).

Reducing or eliminating certain foods from the daily menu may improve digestive health in these people (6).

Some people use the SCD (as well as the GAPS diet), or some other typical Candida diet to treat yeast overgrowth. However, according to Chris Kresser the problem with GAPS, SCD and Candida diets (depending on how they’re done) is that these may be exceptionally low-carb diets or extremely low in glucose or sugar.

But extra low-carb diets, and diets that remove every possible source of glucose or sugar in the diet – may become ketogenic. In other words, your body starts producing ketones. This is bad because there are studies according to which Candida and other yeast can actually thrive on ketones.

There are also studies, according to which white blood cells (neutrophils), are less able to kill Candida when ketones are present. That’s why some individuals are using a low FODMAP diet for Candida overgrowth, as it seems that the bacterial markers and the fungal markers are changing and going away when implementing this diet (5).

Diverticulitis happens when one or more of the small bulges or pouches (diverticula) that can develop in the lining of your intestines as you get older –  become inflamed, and in some cases infected. These pouches usually aren’t harmful and can occur anywhere in your intestines (called diverticulosis).

However, the inflammation or infection of these pouches (diverticulitis) can cause serious abdominal pain, nausea, fever, and a noticeable change in your bowel habits. Luckily, according to some sources –  SCD diet may help in the treatment of diverticulitis (7).

Crohn’s disease is an autoimmune disorder, a type of inflammatory bowel disease (IBD) which is an umbrella term that represents two conditions (Crohn’s disease and ulcerative colitis) that cause inflammation in the lining of the intestinal wall. Each type of IBD affects a different part of the gastrointestinal (GI) tract.

Crohn’s disease may influence any part of the gastrointestinal (GI) tract, from the mouth to the anus. This chronic disease causes inflammation of the digestive tract, which can involve different areas of the digestive tract in different people, and lead to malnutrition, abdominal pain, fatigue, severe diarrhea, and weight loss.

Crohn’s disease can be weakening as well as painful, and it may sometimes lead to life-threatening complications (6, 7).

Ulcerative colitis is also an autoimmune disorder, the second type of inflammatory bowel disease (IBD) that causes inflammation and ulcers (sores) in your digestive tract. Ulcerative colitis influences only the lining of the large intestine (colon) and rectum. This disorder can be debilitating and can sometimes cause life-threatening complications.

Fortunately, according to some sources, SCD may help treat people with inflammatory bowel diseases such as Crohn’s disease, and ulcerative colitis (6, 7).

Individuals with celiac disease can’t eat gluten (a protein found in wheat, rye, barley and other grain products). Because, if they do so, and the gluten is in the small intestine, the immune system responds by attacking the small intestine, and causes inflammation and damage to this part of the gastrointestinal tract.

Celiac disease affects only about 1% of people in the United States. So, any gluten intolerance does not mean you have Celiac disease. Celiac disease can cause symptoms such as fatigue, weight loss, diarrhea, bloating and gas, abdominal pain, nausea and vomiting, and constipation.

Therefore, it’s only logical that removing all grains from your diet, as in Specific Carbohydrate Diet (SCD) may help relieve symptoms of Celiac disease (7).

Chronic diarrhea is diarrhea that lasts for more than 2-4 weeks. For some people who have a weakened immune system, chronic diarrhea may become a serious health problem and be therefore a life-threatening illness.

However, according to the proponents of SCD, it might be an effective treatment for chronic diarrhea as well (10).

Cystic fibrosis is an inherited disorder that affects the cells that produce sweat, mucus and digestive juices and causes serious damage to the digestive system, lungs and other organs in the body.

Although more research is needed to be sure if the SCD may affect cystic fibrosis (or any other condition), its proponents believe that it may be an efficient therapy for this disorder (7, 9).

Autism spectrum disorder or autism (ASD), which affects affects an estimated 1 in 54 children in the US today, refers to a wide range of developmental disabilities characterized by:

However, according to some people – following the Specific Carbohydrate Diet may have a positive effect on autism treatment (3). 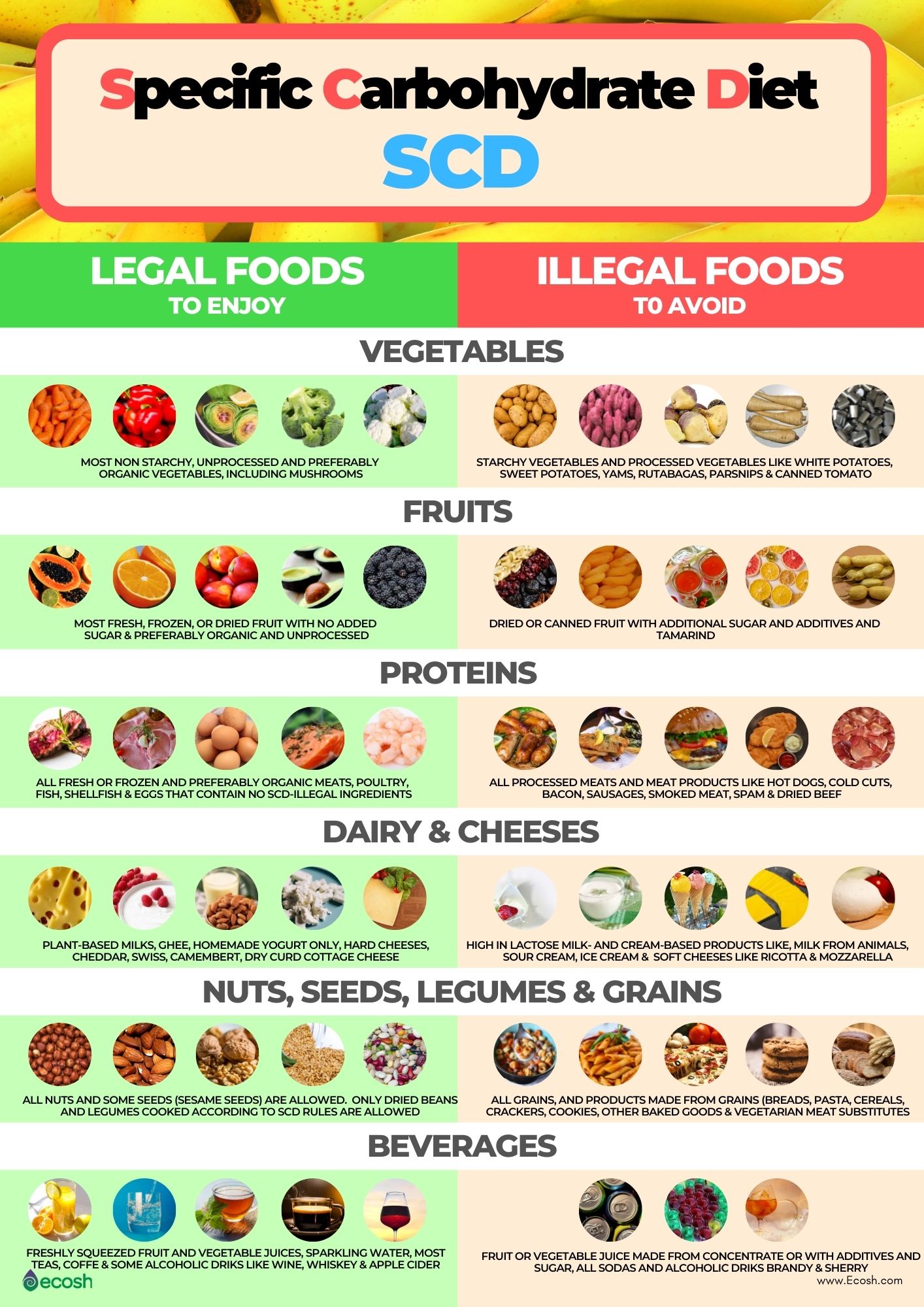 SCD Foods – What Do You Eat on a Specific Carbohydrate Diet?

Hereby you see a universal list of foods that are allowed (legal) on the SCD diet. If you want to find out about each allowed and restricted food in more detail, visit Breaking the Vicious Cycle website.

Hereby you see a universal list of foods that are not allowed (illegal) on the SCD diet. If you want to find out about each allowed and restricted food in more detail, visit Breaking the Vicious Cycle website.

What You Need to Know Before Starting The Specific Carbohydrate Diet

If your symptoms completely stop after following the diet, you may gradually come off the diet without becoming sick again. However, some people may have to remain on the diet indefinitely. The author of the Breaking the Vicious Cycle recommends remaining on the diet until at least 1 year after the last symptom has disappeared (1, 11, 13). 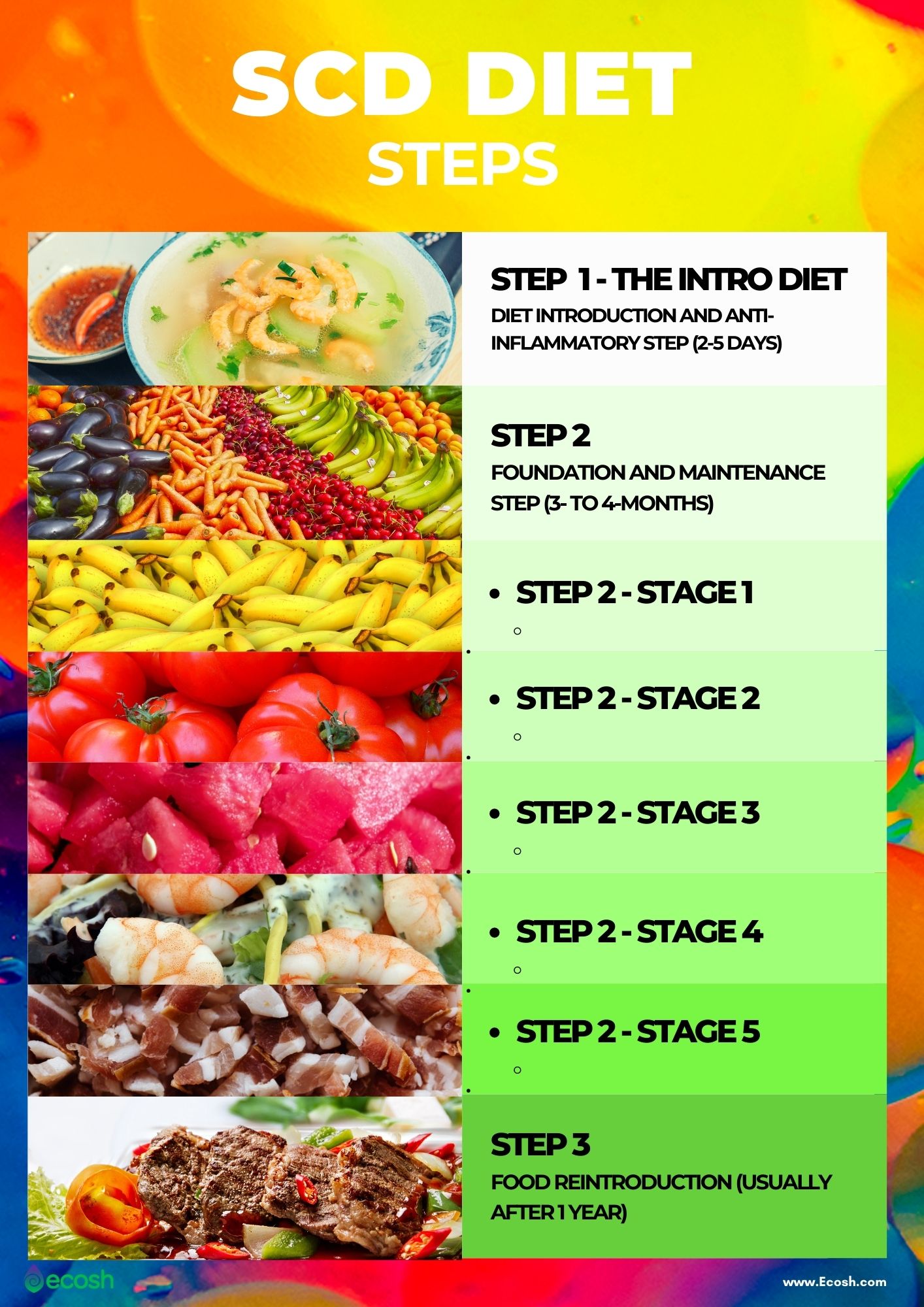 Below are the suggestions of how to introduce foods slowly and eat only well-tolerated foods. Here you can find recipes for the introduction diet and the stages (1-5) in step 2.

Challenges With The Specific Carbohydrate Diet