Inflammatory bowel disease (IBD) is an umbrella term that represents two autoimmune conditions (ulcerative colitis and Crohn’s disease) that cause inflammation in the lining of the intestinal wall. Each type of IBD affects a different part of the gastrointestinal (GI) tract.

Although there’s no known cure for inflammatory bowel disease, some therapies and medications can significantly lessen its signs and symptoms and even bring healing of inflammation and long-term remission. You may also find relief from the right diet and nutrition (1, 3, 24, 29, 30). 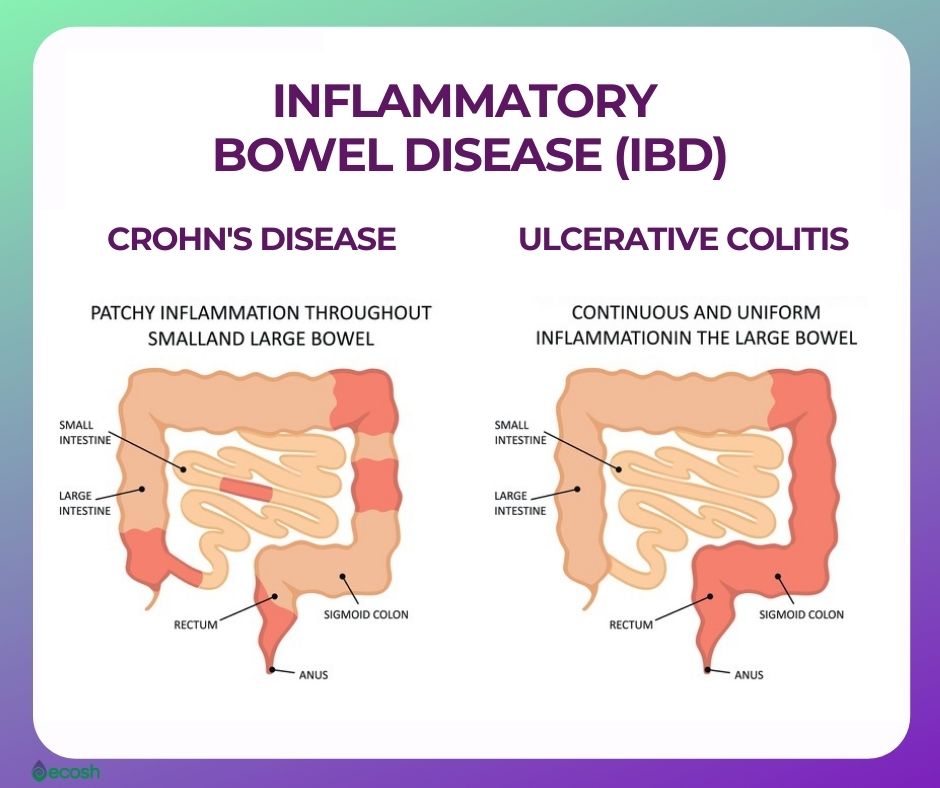 Symptoms and signs of inflammatory bowel disease can vary from mild to severe, and usually develop gradually. However, sometimes symptoms may come on suddenly, without warning. You may experience periods of time when you have no signs or symptoms (remission), or times when symptoms suddenly reactivate (flare-ups).

Inflammatory bowel disease signs and symptoms may include: 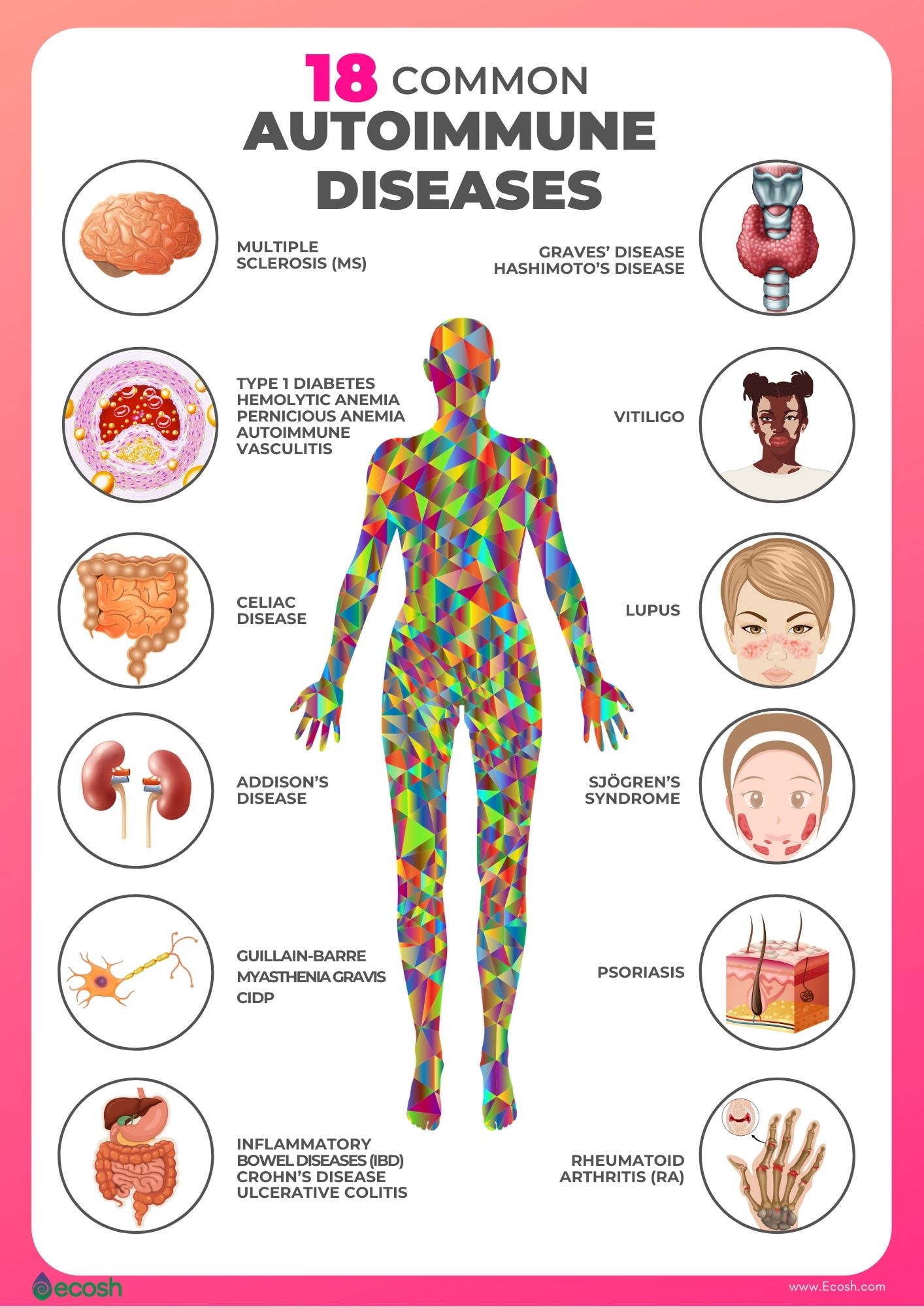 The immune system normally guards against germs like bacteria, viruses, fungi, and other microorganisms. When it detects these alien invaders, it sends out an army of fighter cells to attack them.

Normally, the immune system can tell the difference between foreign cells and your own cells, and during a normal immune response, cells travel out of the blood to the intestines and produce inflammation. Under normal circumstances, harmless bacteria that’s present in the gastrointestinal tract are protected from an immune system attack.

However, in an autoimmune disease like inflammatory bowel disease, the harmless bacteria are mistaken for foreign invaders, and an abnormal immune response causes the immune system to attack the cells in the digestive tract, too.

The immune response causes the inflammation which does not go away. This leads to chronic inflammation, ulceration, thickening of the intestinal wall, and, eventually, symptoms of Crohn’s disease or ulcerative colitis.

According to recent research, several factors, such as heredity, stress, genetics, environmental factors, and a malfunctioning immune system may contribute to its development. Also, although scientists have not proved it yet, it’s possible that bacterium or a virus may be the trigger of inflammatory bowel  disease (1, 2). 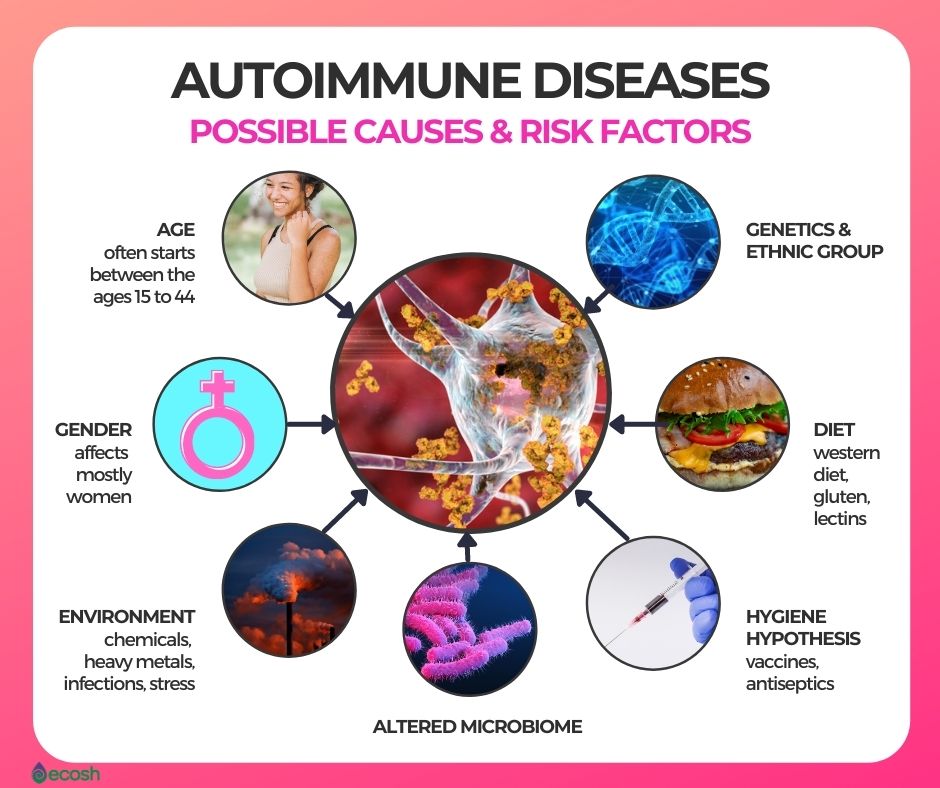 Risk factors and risk groups for inflammatory bowel disease may include: 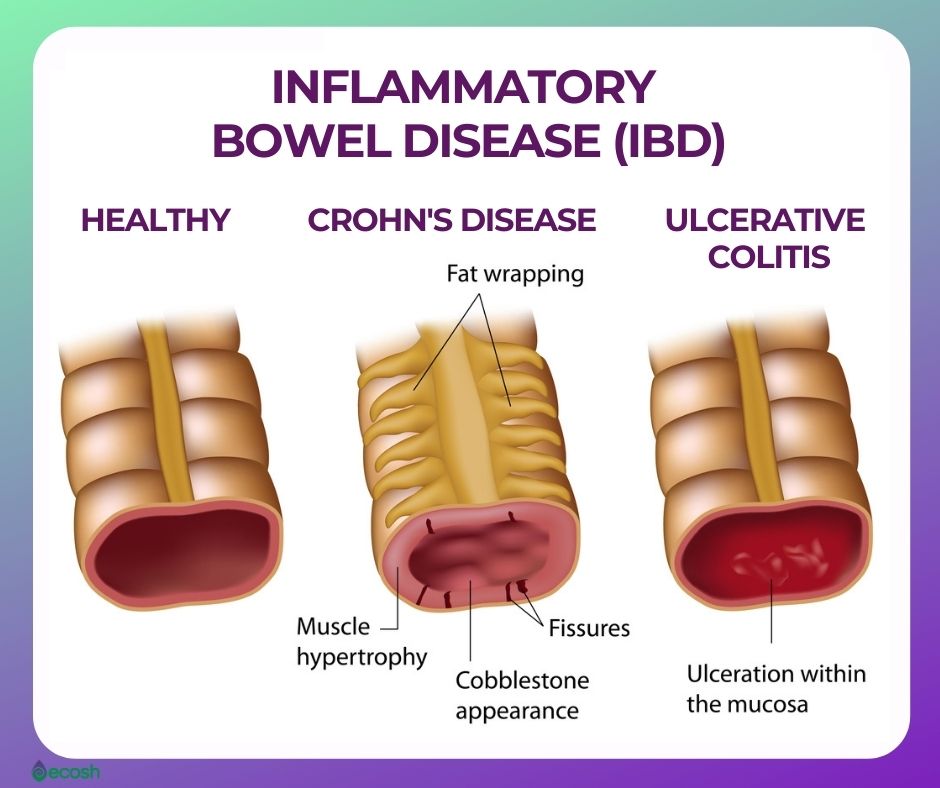 Inflammatory bowel disease may cause one or more serious complications.

Crohn’s disease complications may include:

Ulcerative colitis complications may include:

To diagnose some type of inflammatory bowel disease such as Crohn’s disease or ulcerative colitis, you may have one or more of the following tests and procedures:

Today, there is no cure for IBD. Also, there is no one treatment that is effective for everyone. The main goal of treatment is to lessen the inflammation which triggers the signs and symptoms, and improve long-term prognosis by limiting complications. This may lead to symptom relief as well as to long-term remission. However, you’ll need to weigh the benefits and risks of any treatment, as some medications may have serious side effects (1, 24, 34). 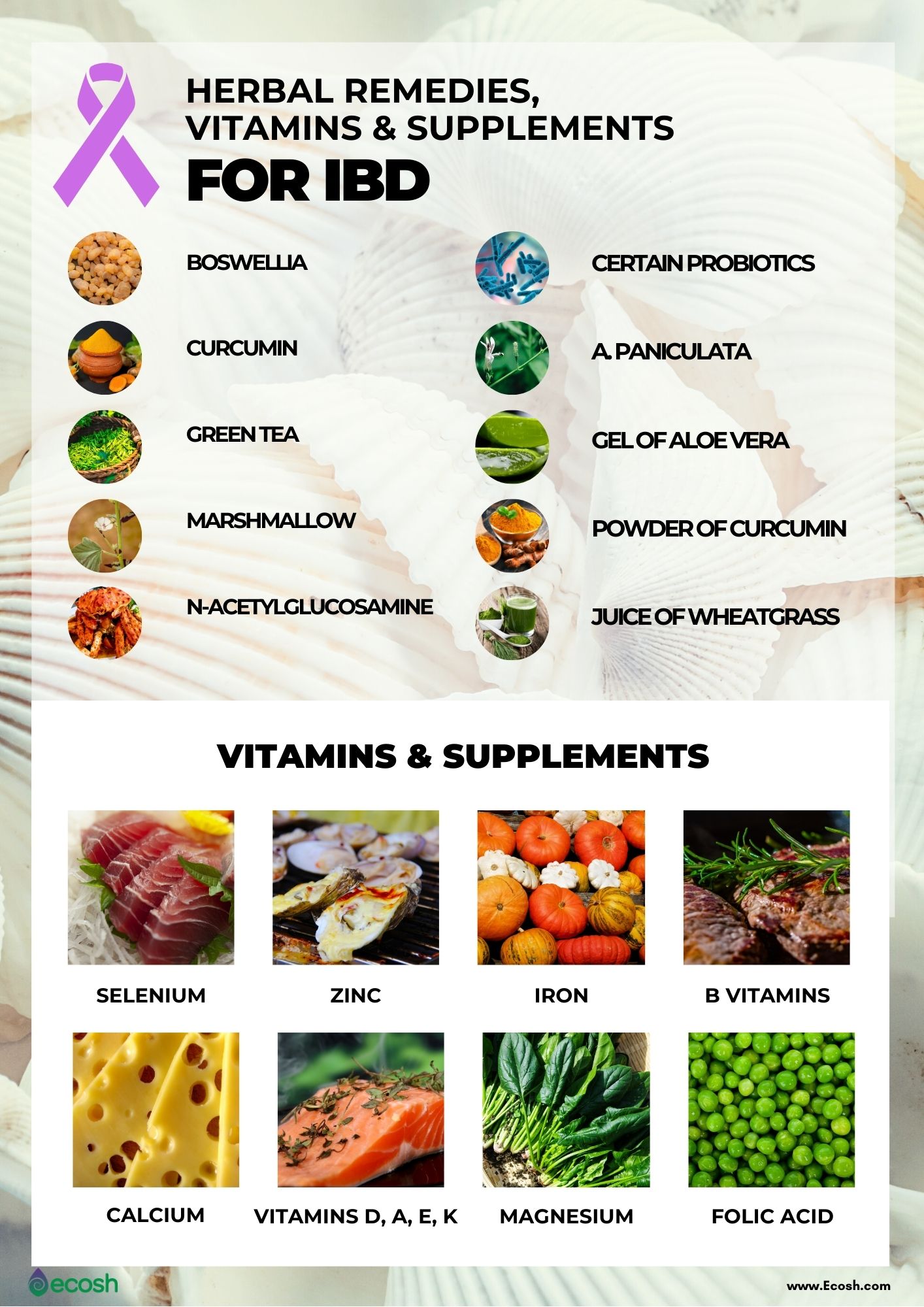 For individuals with inflammatory bowel disease, the goal is to achieve and maintain remission as long as possible. While there are several prescription medications that can help you manage and relieve the symptoms, some people prefer to try alternative medicine.

It’s believed that Boswellia serrata may act as an anti-inflammatory agent. According to a study, 14 out of 20 people with Crohn’s disease who took boswellia supplements achieved remission. Boswellia is sometimes used also for the treatment of inflammation, asthma, and depression. Boswellia supplements are derived from trees that produce a sweet-smelling resin (acid in the resin is the active ingredient) rich in carbohydrates, essential oils, and boswellic acids (5, 6).

Extensive studies in the last two decades suggested that curcumin, the active compound in turmeric possesses anti-inflammatory, anticancer, antiviral, anti-amyloid, antiarthritic and antioxidant properties. This may help fight infections in people with Crohn’s. However, one major challenge in using turmeric to treat Crohn’s is delivering a high enough dose. This is because people with Crohn’s have trouble absorbing turmeric during digestion.

Currently, researchers are developing different ways to deliver turmeric into the body for maximum absorption. Additionally, the health risks of consuming turmeric must be considered for each person. The compound may worsen gallbladder illnesses, interact with blood-thinning medications and interfere with iron absorption. When curcumin is in the body, it may also act similarly to hormones. You should speak to your doctor before taking this supplement if you have a condition that’s sensitive to hormones (6, 16).

According to research, a herb called marshmallow (comes from the Althaea officinalis plant) may soothe tissues during healing, particularly in the stomach which may also lessen inflammation in people with Crohn’s. In addition, the root guards the lining of the stomach, and might thereby reduce stomach acids with no apparent side effects on the body (5, 8).

In some tests, N-acetylglucosamine supplements (most often derived from the outer shell of crustaceans) have been associated to be effective in treating autoimmune disorders, as the supplement may stop cells that produce inflammation. Although further studies are needed to confirm these results, according to one study N-acetylglucosamine supplements lessened colon inflammation in children with Crohn’s disease with no negative side effects (5, 9).

According to a 2019 review several natural herbs may reduce ulcerative colitis symptoms and significantly increase the remission. However, there are few well-designed studies about this topic just yet, and the authors of this review do not recommend any of these substances as a standalone treatment. These herbs include:

Inflamed or damaged gut, severe symptoms, flare-ups, surgeries, and other complications may make it difficult for some individuals with ulcerative colitis or Crohn’s disease to absorb vitamins, minerals, carbohydrates, fats, and water. In other words, for them it’s hard to get enough nutrients from food alone. Also, the damage to the intestines may lead to blood loss over time. This in turn could lower iron levels and cause anemia.

Therefore, your doctor may suggest you to take some supplements. However, always consult your doctor before starting to take any dietary supplements, as while they can help you be better nourished, some can affect the way your IBD medications work or make your symptoms worse. Common supplements recommended for IBD patients include:

Inflammatory bowel disease (IBD) patients commonly have lower levels of nutrients such as:

Vitamin D is necessary for maintaining normal levels of calcium and phosphorus in the blood, which strengthen bones and prevents osteoporosis. However, according to research, almost 50% of people with IBD diseases such as Ulcerative colitis and Crohn’s disease have lower vitamin D concentrations compared with healthy people. Even more, according to a study, lower levels of vitamin D in the blood may increase the risk of clinical relapse in patients with ulcerative colitis. Therefore, adding vitamin D into the diet may help reduce symptoms and increase immune system health in people with Crohn’s (5, 13, 14, 17, 28, 31).

This vitamin is necessary for producing new cells, protecting nerve cells, helping to make red blood cells, breaking down proteins and fats in the body. However, people with inflammatory bowel disease often suffer not only from vitamin B-12 deficiency, but also B-6, and B-1 deficiency (5, 11, 12, 13, 17, 28).

Iron deficiency (anemia) is a frequent complication in IBD patients. However, only people with ulcerative colitis or Crohn’s disease that are in remission (or those without symptoms and without inflammation of the intestine) can take oral iron supplements. If you have ulcerative colitis or Crohn’s disease that is not in remission, or you cannot tolerate oral iron, intravenous iron therapy is usually recommended (10, 13, 17, 24, 26, 27, 28).

Certain inflammatory bowel disease medications, such as methotrexate and sulfasalazine, may interfere with the absorption of folic acid, and lower your body’s levels of this nutrient. Therefore, your doctor may suggest you to take a folate supplement (13, 17, 28).

Intestinal inflammatory processes reduce the absorption of sodium, chloride and calcium, while they increase potassium secretion. Also, some inflammatory bowel disease (IBD) drugs (steroids) may weaken your bones. Moreover, if you cannot digest milk or milk products, you’re at even higher risk to develop calcium deficiency. Therefore, your doctor may recommend you to take calcium supplements to keep your bones healthy and prevent other problems like osteoporosis. However, for strong bones, and in order to absorb calcium, you also need vitamin D (13, 17, 19, 28).

If you had surgery on your intestines, it can make it hard for your body to absorb fats, which also lowers your levels of vitamins A, E and K. So you might need to take supplements or eat foods rich in these vitamins (13, 17, 28).

Inflammatory bowel disease (IBD) patients with serum zinc deficiency are more likely to have adverse disease-specific outcomes. Your doctor may suggest a daily supplement to raise your levels (13, 17, 20, 28).

Magnesium is an essential trace mineral, which plays a key role as an immunomodulator in many pathways leading to homeostasis. Hypomagnesemia (disturbance caused when there is a low level of serum magnesium (less than 1.46 mg/dL)) is common in patients with Crohn’s disease and may be the cause of upregulation of pro-inflammatory factors leading to aggravating symptoms. Therefore, understanding the role of magnesium in maintaining a healthy immune response is important for effective treatment of patients with CD (13, 18, 22).

In studies, people with Crohn’s disease have been reported to be selenium deficient compared with controls. In particular, patients who have undergone bowel resection surgery have a decreased ability to absorb nutrients, including selenium (13, 17, 21).

Although IBD may not be the consequence of bad reactions to certain foods, paying extra attention to your diet may help replace lost nutrients, lessen symptoms, and elevate healing. In addition, some soft, bland foods may cause less discomfort during flare ups than spicy foods, high-fiber foods, or or dairy (if you are found to be lactose-intolerant). However, consult with your dietitian or doctor before making any changes to your diet (23).

Although there is no one suggestion that suits for all IBD patients, these tips may help lead you toward healthier daily nutrition:

Inflammatory Bowel Disease Diet – Eating When You are in a Flare

Certain foods may trigger bloating, cramping, and/or diarrhea, so you may want to avoid when you are in a flare. You should avoid trigger foods also if you have had a recent surgery, or have been diagnosed with a stricture, a narrowing of the intestine caused by inflammation or scar tissue.

Some other foods on the other hand can be easier to digest and these may provide you with the right amount of nutrients, vitamins, and minerals without making your symptoms worse. However consult your doctor or dietitian before starting any elimination diet.

Inflammatory Bowel Disease Diet – Eating When You are in Remission

It’s vital to maintain a nutrient-rich and diverse diet, as well as being hydrated even when your symptoms have subsided, or even disappeared (remission).

Foods that can help you stay healthy and hydrated: