Minerals are like precious stones. They serve vital biological tasks in the body and without minerals, neither the soul nor the body can be healthy and healed in case of disease.

For instance, to function normally, your body needs 25 minerals, seven of which are the main macronutrients – potassium, calcium, sodium, magnesium, sulfur, chlorine and phosphorus. Even more, your body needs these minerals in large quantities, more than 0.1 g daily.

However, your body needs less microelements, only in milligrams or micrograms. Iodine, copper, zinc, chromium, selenium, manganese and silicon are at the top of the list of the vital microelements. It is these minerals that cause severe metabolic disorders and congenital malformations.

Although people need small amounts of minerals, the human body does not have sufficient mineral reserves to survive their long-term deficiency. Mineral need also depends on age, gender and other conditions. For example, women have an increased need of iron during pregnancy and menstruation, and due to high sweating, athletes have higher need of sodium and magnesium.

To clarify, all macro and microelements are interrelated and interdependent. Because in the body, the balance of these elements has evolved over hundreds of thousands of years through evolution.

For vital activities, the body receives the minerals it needs from food and stores them mainly in the muscles and bones. In case the body is functioning normally, some elements such as calcium, phosphorus, iron and iodine are not removed by organism, but are in constant circulation and reuse.

Microelements and Macroelements are Indispensable Nutrients for Our Body’s Cells, Organs and Organ Systems

Biophysicist and biochemist, Dr. Carey A. Reams, found that the human body needs 84 (out of the known 106 elements) of the basic elements to maintain good health.

Zinc, selenium, iodine, silicon, manganese, copper and chromium are vital micronutrients for the human body, because each of those participates in more than 500 chemical reactions in the body.

However, their presence depends on the uptake of all other minerals, the activity of vitamins and enzymes, etc.

Specialists say: “We have no real idea of ​​how many physically and mentally retarded children can be brought back to normal, how many arthritis, skin diseases, heart attacks and other” incurable “diseases due to circulatory disorders can be prevented and removed with the help of the microlements.”

Moreover, evidence reveals that increasing deficiencies of minerals, especially the rare trace minerals, are the largest cause of aging and physical problems.

In addition, research has shown direct link between mineral deficiencies and illnesses. For example, diabetes or hypoglycaemia involve chromium, zinc, and vanadium deficiencies, but cancer and heart disease involve selenium and copper deficiency. It is well known fact, that osteoporosis involves a calcium deficiency, but few know about the need for magnesium and boron as well. The list of similar links goes on and on.

That is to say, that even marginal deficiencies of essential nutrients can significantly weaken the immune system. However, small amounts of natural elements are more efficiently absorbed than large amounts.

Our grandparents had a much better, mineral-rich diet than we have today. So, they did not had the same need to intake food supplements as we do. However, you should choose dietary supplements from well recognized manufacturers, who make natural quality products. 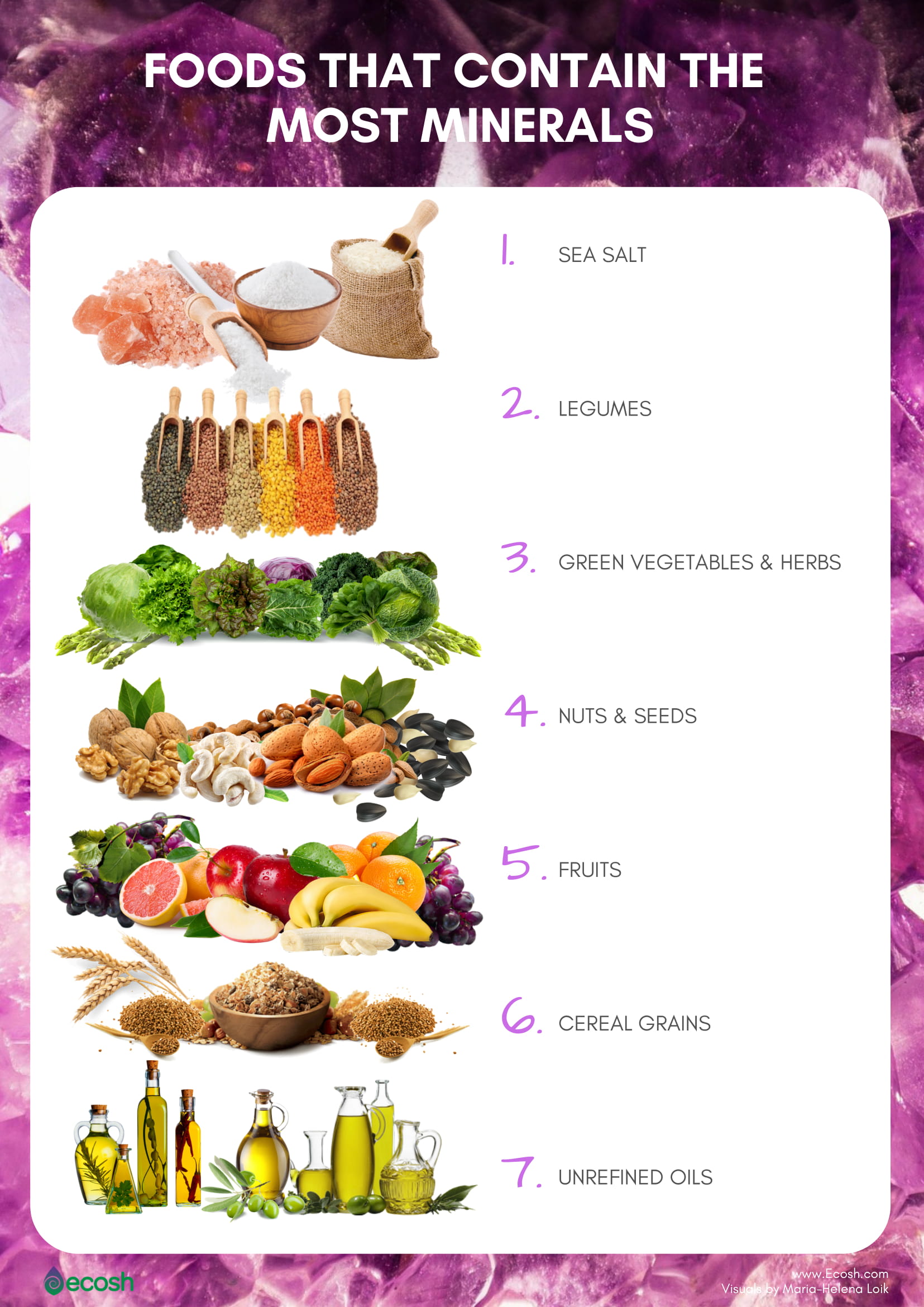 Foods that Contain The Most Minerals

Good sources of micronutrients are:

For instance, the World Health Organization and the Food and Agriculture Organization of the United Nations have described this situation as “the hidden hunger.”

Significant deficiency of minerals (microelements) can be caused by:

Can a person get all the necessary minerals from food?

Academician P.A. Avtsyn has said that the living organism receives the microelements it needs from air, water and food. Because our body cannot make minerals, so these nutrients must be consistently replaced. However, studies have shown that most of these necessary microelements are no longer found in soil, plants or food.

In conclusion, this results in abnormalities and health problems. However, you can avoid these health problems, if you add dietary supplements in your daily menu. 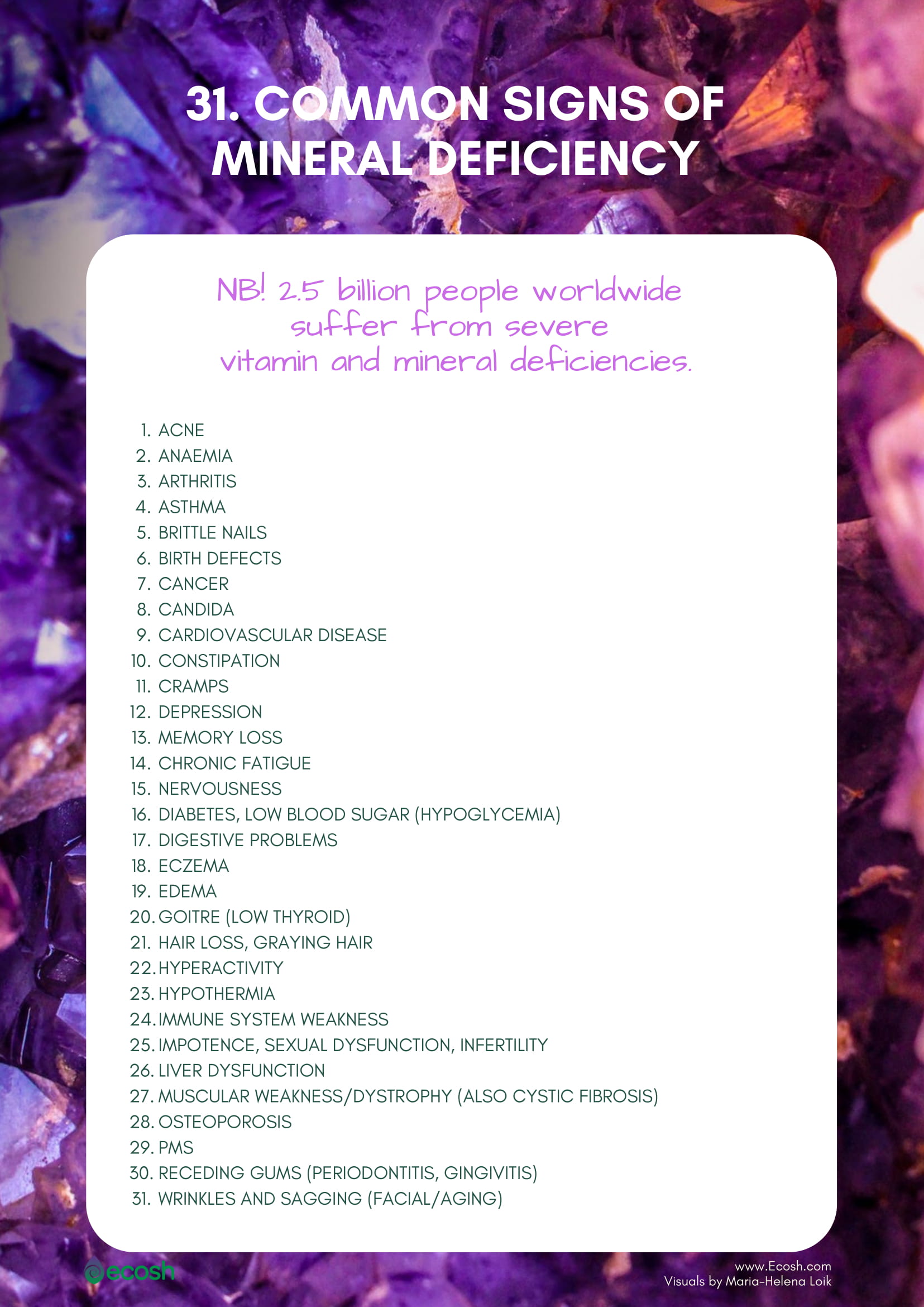 Do blood and urine tests show a deficiency of minerals?

Even more, our body loses minerals daily for example because of sweating or long-term processes, which can be caused by stress, parasites and a lack of microelements in the food we eat.

In conclusion, blood and urine tests do not reflect the real situation in your body or lack of microelements.

Treatment with medicinal drugs only removes the symptoms of the disease temporarily, but no drug can eliminate the worsening micronutrient deficiency. For example, a person started to have headaches, and he took a painkiller. But the real cause of the pain is blood vessel spasm caused by chromium deficiency.

So, until this person does not treat chromium deficiency, the painkillers only hide the true problem.

In addition, when the body tries to expel this chemical drug as a non-natural substance, it also uses microelements in the process. Therefore, failure to understand the true causes of the disease will lead to the progressing of the disease. Moreover, the disease might become resistant to the traditional medicinal drug treatment.

In other words, the use of antibiotics and other drugs does not compensate for the deficiency of the minerals in the body!

For instance, in the doctor’s office, most attention is paid to iodine and iron only. Iodine, because its deficiency is associated with a decrease in thyroid hormone production and iron is labeled as deficient in hemoglobin. In reality, however, low levels of thyroid hormone may be the cause of selenium deficiency and a low level of hemoglobin (anemia) can hide a copper deficiency.