5-Hydroxytryptophan (5-HTP) has been available as an OTC supplement and a prescription medication for several decades. It`s an amino acid that your body naturally produces and uses to produce serotonin. Low serotonin levels are associated with low mood, fibromyalgia, weight gain, depression, anxiety, migraine, sleep disorders and other health problems.

Therefore, some doctors believe, that increasing your body’s production of serotonin may provide various benefits.

Manufacturers derive the supplement from the seeds of African plant Griffonia simplicifolia. These supplements are not the same as L-tryptophan supplements, which may also increase serotonin levels. Your body produces serotonin through a series of chemical steps, starting with the amino acid L-tryptophan. One of the substances on the way from converting L-tryptophan to serotonin is 5-HTP. It is not present in foods and can only be added to your diet through a supplement.

Minor side effects have been linked to 5-HTP, but they can be minimized by starting with smaller doses.

Given that 5-HTP may negatively interact with some medications, consult to your doctor to ensure it’s safe for you to use. Here are 6 promising health benefits of 5-HTP supplement, backed by science. 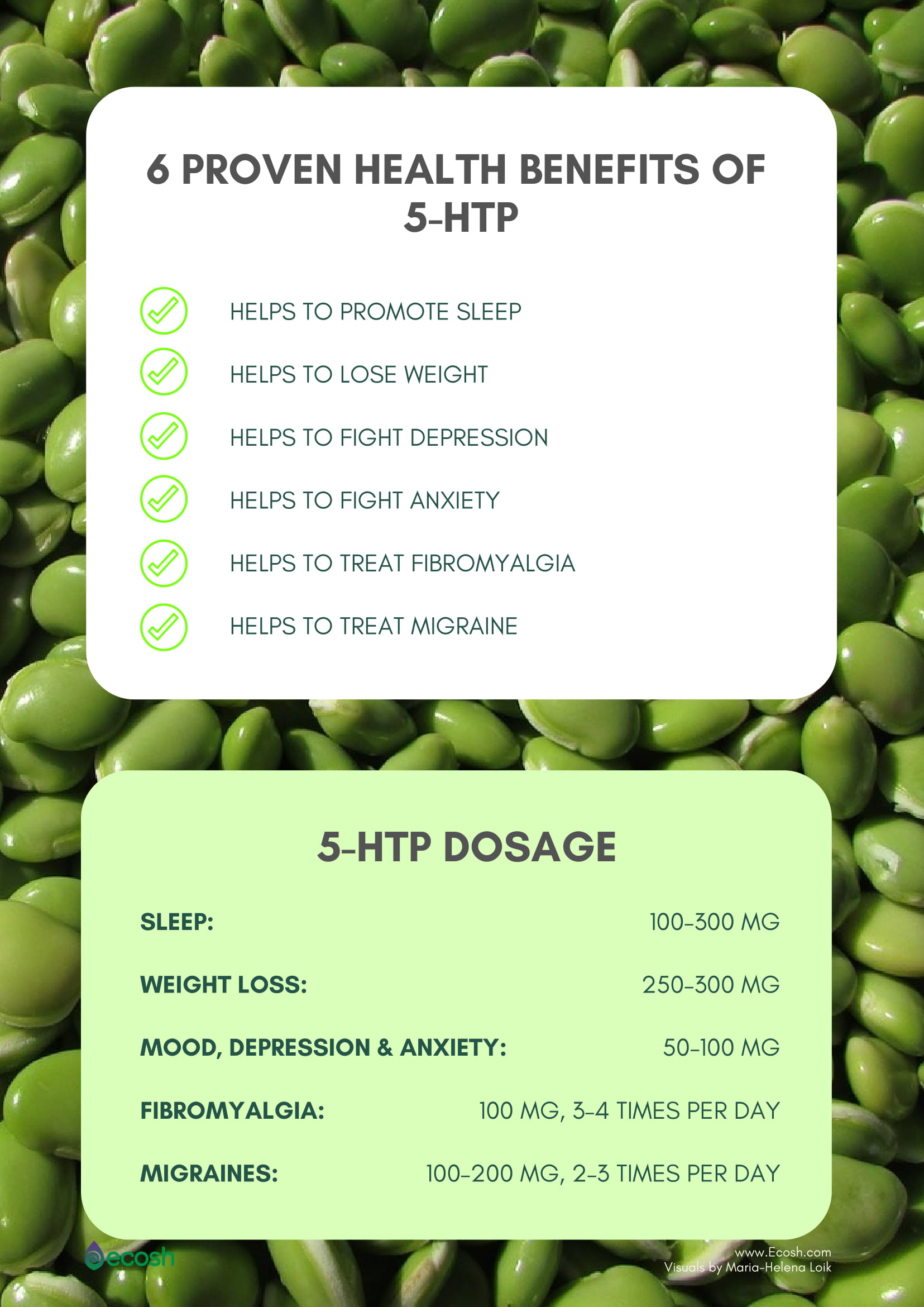 1. May Promote Sleep by Increasing Your Melatonin Production

Melatonin plays a vital role in regulating sleep. Its levels start to rise in the evening to assist sleep and fall in the morning to help you wake up. 5-Hydroxytryptophan produces serotonin, which can be converted into the hormone melatonin. Therefore, taking those supplements may help you sleep by increasing melatonin production in your body.

Many studies about 5-HTP and sleep are based on animal models. While these results are promising, there is a lack of human-based studies.

One 2018 study found that the GABA/5-HTP combination could induce sleep and also enhance sleep quality and length of sleeping time.

In this study researches looked the effects of 5-Hydroxytryptophan (5-HTP) and gamma-Aminobutyric acid (GABA) on fruit flies, mice, and rats. They used caffeine to prompt sleeplessness, then administered the the blend of GABA/5-HTP. GABA is a chemical messenger that promotes relaxation. In fact, several insect and animal studies suggest that 5-HTP improves sleep quality, and that the effect is greater when 5-Hydroxytryptophan is combined with GABA.

Another study found that 5-HTP may also be beneficial in treating disorders of arousal, such as sleepwalking and sleep terrors.

2. May Help to Stimulate Weight Loss by Increasing Feelings of Fullness

In a study conducted on 2017, researchers gave 7 participants a 5-HTP dietary supplement and another seven a vitamin C dietary supplement. They then showed participants real food and images. At the same time researchers performed MRI scan, according to which a brain response for protein-rich foods was more likely to occur in those who took the 5-HTP supplement than in people who did not.

As protein can help a person maintain a healthy body weight, the researchers concluded that 5-HTP may help to lose weight by reducing cravings for unhealthful foods.

Weight loss can increase the production of hormones that make you feel hungry, almost starving. And these feelings can make losing weight impossible for you in the long term. 5-HTP works to suppress appetite and acts against these hunger increasing hormones.

In one small study, overweight women who took 5-HTP for 4 weeks reported greater feelings of fullness, when eating. This led to a decreased food intake (they consumed about 435 less calories per day) and a reduced body mass index (BMI).

Moreover, animal studies have demonstrated that 5-HTP may lower excessive overeating due to stress or depression.

Although these studies were quite small, they still demonstrated some promise that 5-HTP could help with weight loss. It is vital to note that larger-scale research is necessary to validate these results.

Selective serotonin reuptake inhibitors are a common treatment for depression. These medications work by preventing the body from breaking down serotonin, thereby increasing the amount that is available in the body.

Several small studies have found that 5-HTP supplements reduced symptoms of depression. But, hold your horses. An older meta-analysis examined the results of more then 100 studies related on the topic. While the authors reviewed those studies, they found that only few studies used high-quality methods. So, at the moment there is not enough evidence to make final conclusions.

Even more, much of the research suggests that the potential depression relieving effects of 5-HTP are stronger when combined with other substances or antidepressant medications.

There is another challange though. The 5-HTP supplement does not usually last long in the body, because the body rapidly absorbs and eliminates it. So this can keep it from being an effective method to treat depression. If scientists could find some solution to make 5-HTP last longer in the body, it may show more promise as a depression treatment, according to one study.

In conlucion, more high-quality studies are necessary before 5-HTP can be suggested as a remedy for depression.

Contributes to The Treatment of Fibromyalgia

Much of the focus on using 5-HTP for pain relief surrounds the treatment of fibromyalgia, a condition that causes chronic nerve pain, muscle and bone pain, as well as general weakness. Chronic pain from fibromyalgia can affect a person’s sleep and mood. Presently – the cause of fibromyalgia is unknown. However, low serotonin levels have been associated with the condition.

As 5-HTP can boost serotonin levels in your body, researchers believe that 5-HTP supplements may help relieve some symptoms of fibromyalgia.

For example, early evidence suggests that 5-HTP may improve symptoms of fibromyalgia, including muscle pain, sleep problems, anxiety and fatigue. Also, one study from 1990, found that taking the 5-HTP supplement may help reduce symptoms in participants with primary fibromyalgia syndrome.

In other study, people with fibromyalgia were given 5-HTP in combination with a type of antidepressant medication called monoamine oxidase inhibitors (MAOIs). For conclusion of this study, people who suffered from fibromyalgia reported significantly reduced pain.

Nonetheless, studies on 5-HTP and fibromyalgia are limited and too old to draw any clear conclusions about the effectiveness of 5-HTP at improving fibromyalgia symptoms. So newer and larger studies are necessary to confirm these results.

Could Help to Fight Headaches and Migraine

Migraines are throbbing headaches that are often accompanied by nausea or disturbed vision. The exact cause of migraine is unknown, but some researchers believe they are triggered by low serotonin levels. And they migt be right, because many studies have found that the 5-HTP may help you have fewer migraines by increasing your serotonin levels.

One study in 124 people found that consuming 5-HTP supplement daily for six months prevented or significantly decreased the number of migraine attacks in 71% of participants.

In another study in 48 students, 5-HTP produced a 70% decrease in headache frequency, compared to an 11% decrease in the placebo group.

Could Assist The Treatment of Anxiety

Doctors know that a lack of serotonin is likely to play a role in low mood, anxiety depression and panic. Also, some natural medicine proponents believe that taking 5-HTP supplements can help reduce anxiety and panic. However, although there is a strong association between anxiety, 5-HTP and serotonin, most of the studies about 5-HTP link with anxiety are 15–20 years old.

One 2002 study found that taking 5-HTP supplements reduced anxiety and panic in people with panic disorder.

However, the researchers did not find any difference in anxiety in other participants who did not have a panic disorder.

Possible Side Effects of 5-HTP

The side effects of 5-HTP are dose-dependent, so they get worse when increasing your dose. To minimize these side effects, start with a small dose (50–100 mg two times per day) and increase to the dose over a two-week period. Remember to keep the right balance and listen to your body! If you don`t, you may experience side effects like:

According to some research, taking 5-HTP may increase serotonin but reduce the amounts of other neurotransmitters like dopamine and norepinephrine. This side effect may actually make some health conditions and diseases worse. However, this is more likely to occur when you take 5-HTP supplements long-term. Such conditions include:

Before taking 5-Hydroxytryptophan, consult your doctor or pharmacist to ensure the supplement will not interfere with any medical conditions or medications.

You can find 5-HTP in a variety of dosages. These include 25-, 50-, and 100-milligram (mg) capsules. There is no specific suggested daily intake for 5-Hydroxytryptophan.  So, the recommended dose for this supplement depends on your reason for taking it. Mostly people will take 50–100 mg per day after starting at a lower dose of 25 mg and increasing the dose weekly. Some start at the dose 50-100 mg per day.

Here are some general guidelines for taking 5-Hydroxytryptophan supplement: