Iron deficiency occurs when there is not enough iron in the body. Quite often, a person does not even suspect iron deficiency, because the characteristics of this situation are quite general. However, there are 12 main symptoms that indicate iron deficiency.

If you don`t want to wait until the symptoms show, we have a good news for you! There is a simple method how you can test the possible iron deficiency in your body before the serious health conditions appear. You can read about this simple home test method below.

Fatigue is the most common sign of iron deficiency, as the body needs iron for the production of hemoglobin. Hemoglobin is a protein in red blood cells that helps the body transport oxygen. When the body does not have enough hemoglobin, the tissues and muscles do not receive enough oxygen, which results in reduced performance and fatigue. This results in a condition called anemia. Although there are different types of anemia, iron deficiency anemia is the most common in the world.

Pale skin and dark circles under the eyes are another major sign of iron deficiency. Because hemoglobin in red blood cells gives the blood a red color, and the lack of hemoglobin reduces the red color of the blood, which in turn causes the skin to become pale. The pinkish tone on the cheeks, lips and gums will be lost. If you want to test iron deficiency, pull down your eyelid. If the eyelid is pale pink or yellowish color on the inside, it also refers to iron deficiency.

Because iron deficiency affects the number of red blood cells, a lack of them can also complicate your hearts work. Heart palpitations, chest pains and respiratory arrest may occur more often and eventually this can lead to more severe heart disease.

Because iron levels in the body are low during iron deficiency, oxygen levels are also low. This means that the muscles do not get enough oxygen to work normally. This can affect even simple things like walking. As a result, the rate of breathing increases as the body tries to get more oxygen. Therefore, dyspnea is a common symptom.

This usually results in a feeling of discomfort in the legs, where the person has an irresistible urge to move to relieve it. Unfortunately, this uncomfortable feeling cannot be relieved by moving or scratching. This syndrome is one of the strangest symptoms of iron deficiency.

If you constantly complain about cold hands and feet that do not want to warm up in any way, it also signals that there might be a problem with your blood or blood circulation and you should do a blood test.

This symptom, along with chest pain, is a signal from the body that you should lie down because oxygen flow to the brain (and heart) is impaired. Low hemoglobin levels in red blood cells mean that the brain does not receive enough oxygen. As a result, blood vessels in the brain may swell, causing pressure and headaches.

Iron deficiency can lead to a desire for things that are actually unsuitable for eating, such as clay, soil, sand, paper and ice.

In addition to these symptoms, human hair may become brittle and even prematurely gray.

Other disorders of the nervous system are memory disorders, anxiety, weakness, sensations of mischief.

Gastrointestinal signs include loss of appetite, nausea, abdominal pain, vomiting, constipation or diarrhea, inflammation of the tongue, ulceration of the mucous membranes of the mouth, dysphagia.

Iron helps to regulate the production of proteins in the immune system that control inflammation, and an iron deficiency might make the upper airway more prone to inflammation, leading to chronic cough.

Most iron in the body is found in blood hemoglobin (85%) and in myoglobin, which is a protein in muscle cells. Iron is involved in numerous metabolic reactions in the body and is in composition of several enzymes. It is required for the activity of many chemical reactions in the brain, immune system and other tissues.

Iron deficiency anemia is widespread in schoolchildren, adolescents and women aged 15-50 years. In particular, women with heavy menstrual bleeding so called menorrhagia (at least 30% them suffer from iron deficiency). Symptoms develop gradually and may go unnoticed.

Anemia occurs in 45% of women during pregnancy. In fetus and children, iron deficiency may inhibit the development of the central nervous system.

As a result, these groups of people may have an increased risk of iron deficiency anemia:

Iron deficiency may occur in case of:

Women are three times more likely to develop iron deficiency than men (due to menstruation, childbirth, pregnancy and lactation). The occurrence of anemia is indicated by a fall in hemoglobin concentration below the normal value, which can be detected by a blood test.

The daily dose of iron is usually 15-18 mg, while the maximum and therapeutic dosage is 50 mg. However, only your doctor or physician can determine the therapeutic dose. A 70kg man has about 4 grams of iron in his body. Women’s iron reserves are 1/5 higher. Iron stores are found in bone marrow, liver and spleen.

How much iron should a healthy organism contain?

Also skeletal muscles, heart muscles and other places in your body contain ferritin. 95% of iron is present in cells and about 5% is extracellular.

What is the daily recommended intake for iron?

The iron need and absorption of different organisms may varie from time to time. Only 10-15% of the iron is absorbed from your daily diet. However, if your iron stores are low, the body’s ability to bind iron will increase. For example, during pregnancy and lactation, when the iron requirement is higher in women, its absorption is quadrupled. 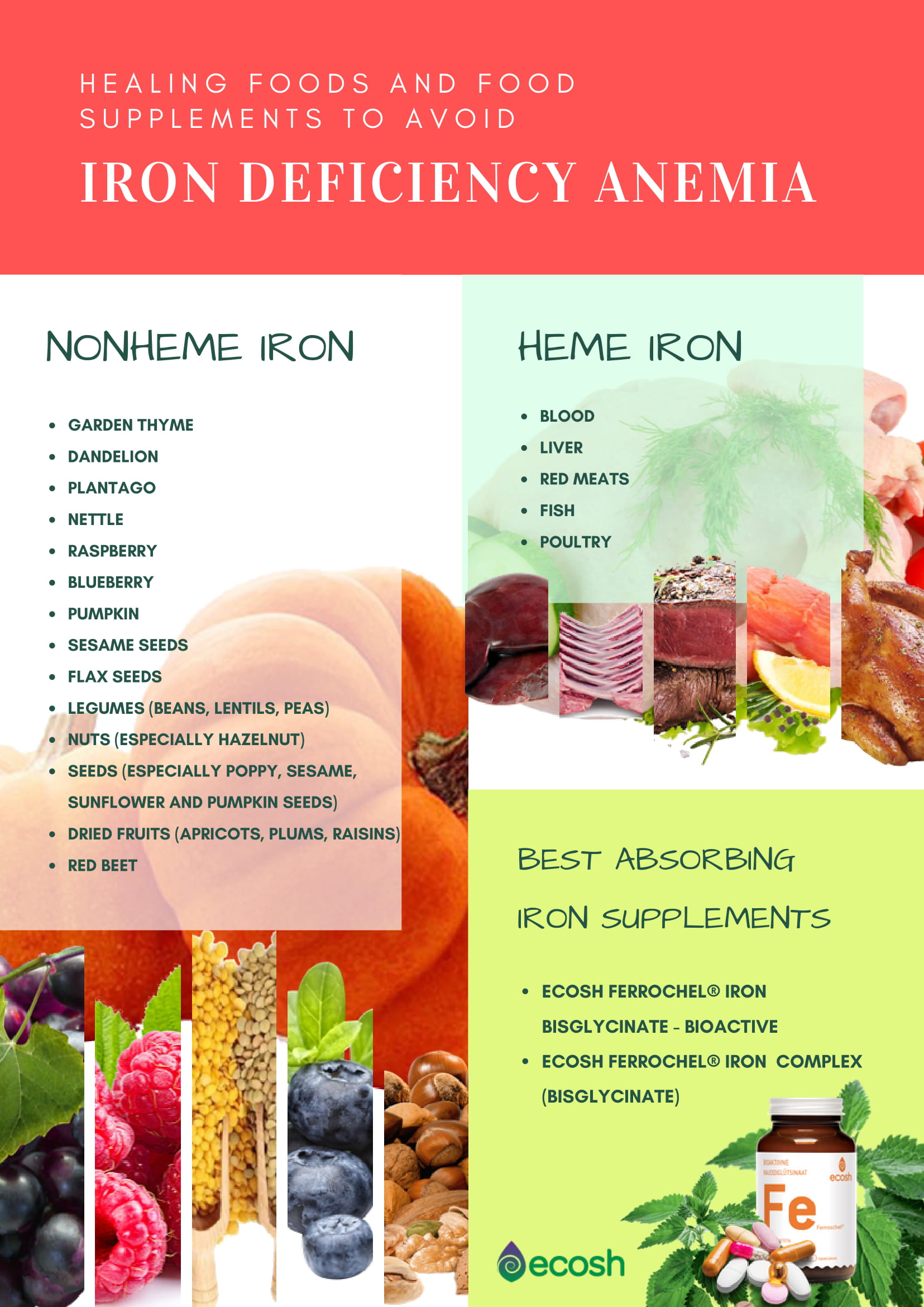 There are two forms of dietary iron – heme and nonheme.

Heme iron is found in animal foods that originally contained hemoglobin, such as:

Seafood, poultry and meat contain both- non-heme and heme iron. Your body absorbs the most iron from heme sources meaning from animal foods, because its absorption is not dependent on other foods or gastric acid.

NB! Iron intake from plant foods is almost impossible without the simultaneous intake of foods containing vitamin C or other organic acids. Your body absorbs nonheme iron most easily from rye bread and soy products.

Other good sources of nonheme iron are:

If choosing iron supplements, make sure to pick quality and well absorbing products. Ecosh iron supplement is extracted from a plant of the genus Brassica, which has the ability to accumulate large amounts of minerals. One Iron capsule contains 27 mg of iron. More importantly, Ecosh Iron supplements do not cause constipation, do not irritate the intestines and are bio-efficient.

Ecosh’s Ferrochel® Iron Bisglycinate is an iron supplement that is GMO free, more effectively absorbable than other types of iron chelate and well tolerated by the gastrointestinal tract. Ecosh Iron is safe to use for pregnant women, nursing women, teens and adults. Unlike most iron supplements, it does not cause constipation or gastric irritation.

BEAUTY VITAMINS – 14 Beauty Supplements That May Help You Look Younger

We use cookies to ensure that we give you the best experience on our website. If you continue to use this site we will assume that you are happy with it.Ok