Curcumin is a principal curcuminoid and the main active ingredient in Turmeric (Curcuma Longa). As a member of the ginger family (Zingiberaceae), this spice with a very strong aroma and bitter taste is similar to ginger root. Therefore, turmeric is very common in many Asian cuisines and it’s the spice that gives curry its yellow color.

Though it is primarily used as a spice, at the same time it is one of the most useful and well-known medicinal herbs. As a result, turmeric has been used for thousands of years in traditional Ayurvedic and Chinese medicine in India.

Now also the studies have confirmed the strong antioxidative, anti-inflammatory, anti-viral, anti-cancer, anti-pain and other beneficial and healing effects of turmeric.

Therefore, turmeric is now one of the most studied antioxidant herbs in the world. In this article you can read about the nutritional value, proper absorption and the 22 health benefits of turmeric and curcumin.

What is The Difference Between Turmeric, Curcuminoid and Curcumin?

There are more than 100 species of turmeric in the world and one common characteristic is their yellowish-orange hue. Curcuminoids are the substances that give this tone to turmeric. Turmeric contains three main curcuminoids, which make up 2-6% of the rhizome content, and out of these – curcumin has the highest proportion, which is up to 80%. For example, the powdered turmeric spice for cooking contains on average 1-3% or 1-3g of curcumin per 100g.

Curcumin is the active ingredient in turmeric that treats people at the cellular level.

However, if you eat turmeric as a spice for therapeutic purposes, you must consume it in very large quantities so that the body can absorb the amount that affects it for treatment purposes. Though, it would be very difficult to reach these levels just using the turmeric spice in your foods. Even more, to eat turmeric in such a high amounts is harmful to health, and causes bile problems.

Therefore, the most valuable part of turmeric – curcumin, has been started to extract, and if you want to experience the full effects, you need to take a supplement that contains significant amounts of curcumin.

Curcumin has an effective anti-inflammatory effect, it also organizes and protects cells and can be consumed in small quantities.

Turmeric is rich in healing antioxidants and vitamins. There is plenty of vitamins C, E and K. Vitamin K is known to have a blood clotting-boosting effect, an important vitamin for the cardiovascular system.

According to the United States Department of Agriculture (USDA) National Nutrient Database, one tablespoon (tbsp) of turmeric powder contains:

Also, it is a stimulator of the body’s most powerful antioxidant glutathione. 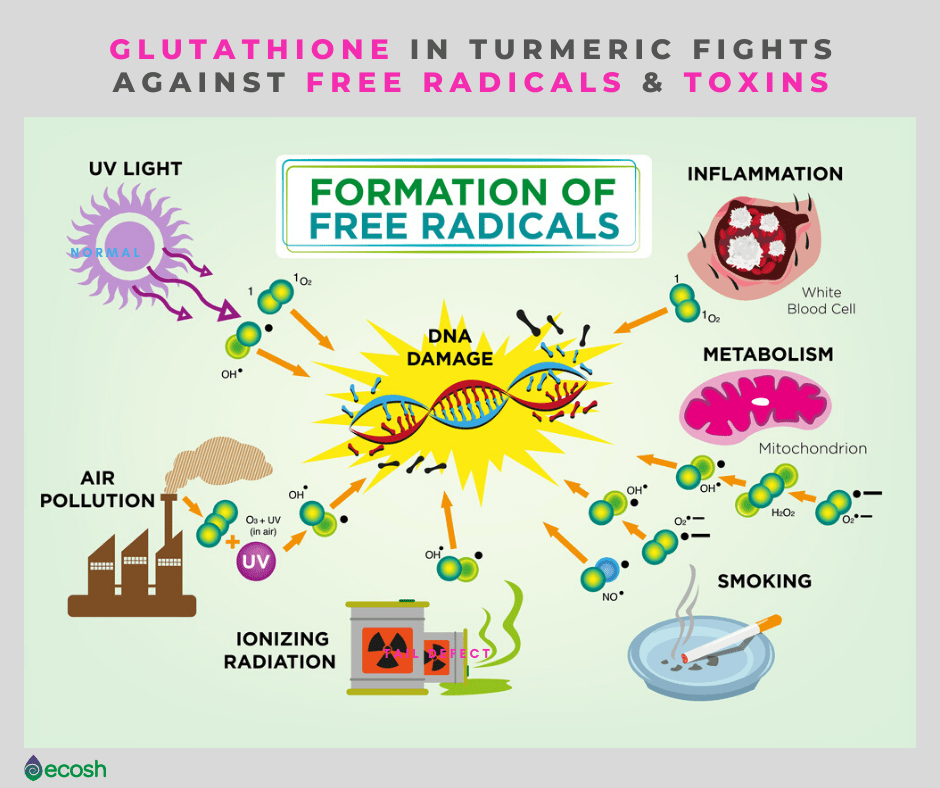 Glutathione is an effective detoxifier, a booster of the immune system and essential for maintaining good health. The body itself produces moderate amounts of glutathione, but poor diet, environmental pollution, stress, infections and constant exposure to radiation reduce the body’s glutathione levels.

Glutathione is a simple molecule made up of three amino acids – cysteine, glycine and glutamine. Glutathione contains a sulfur group that helps bind and remove all harmful toxins, free radicals and even heavy metals from the body.

The latter feature is particularly important because there are more and more heavy metals in our daily environment, which have very severe toxic effects on the whole body and especially on the central nervous system.

Glutathione is used in a number of metabolic and biochemical processes, such as:

Therefore, any system in the body is affected by glutathione levels, especially the immune system, nervous system, digestive system and lungs. This substance also plays an important role in iron metabolism.

The problem with curcumin is poor absorption. It’s because digestive enzymes destroy up to 90% of its active compounds. However, the piperine contained in black pepper increases the bioavailability of curcumin and guarantees maximum results from its consumption. Piperine enhances the absorption of curcumin even by 2,000%.

So, to solve the problem with poor absorption, the best curcumin supplements now contain piperine, substantially increasing their effectiveness.

Moreover, the piperine contained in pepper also has a bactericidal effect, it reduces appetite and improves mood. A study by researchers at the University of Michigan showed that long-term consumption of a complex of curcumin and black pepper reduces the risk of developing mammary glands and other cancers.

Curcumin with piperine can also be beneficial in case of:

Because turmeric is fat-soluble, it is definitely worth eating it with fatty foods. The best option would be to improve the solubility of turmeric by adding oil (linseed or olive oil). 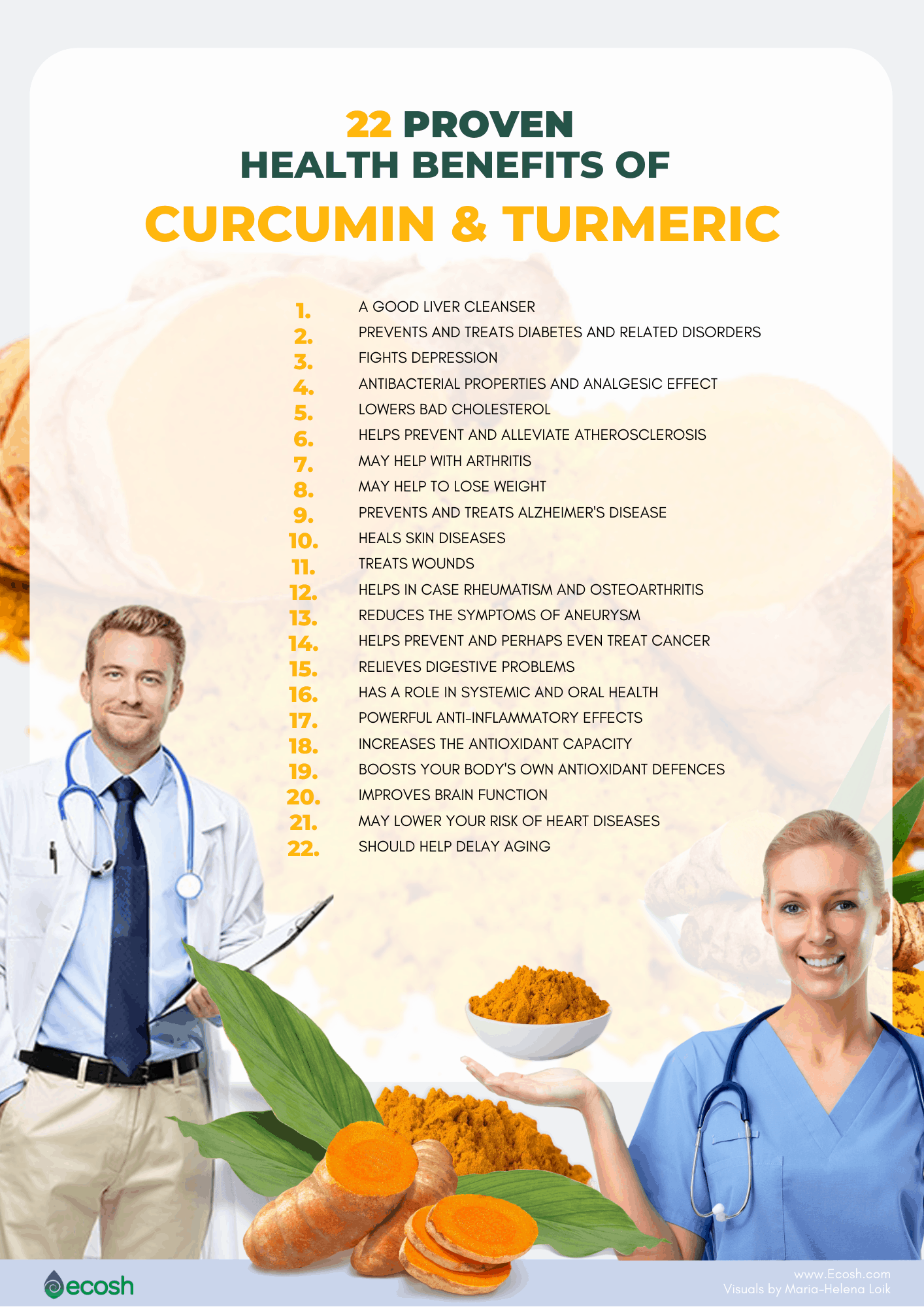 Here are the top 22 evidence-based health benefits of curcumin.

1. It is a good liver cleanser

Adding turmeric to your daily menu is the easiest way to cleanse and detoxify your body. As early spring is the best time for liver cleansing, turmeric is an indispensable helper.

2. Curcumin may prevent and treat diabetes and related disorders

Recent studies have provided the scientific proof and confirmed the important role of curcumin in the prevention and treatment of diabetes and related disorders.

It may have beneficial effects on key aspects of diabetes, including insulin resistance, hyperglycemia, hyperlipidemia, isolated apoptosis and necrosis. In addition, curcumin can prevent the harmful complications of diabetes.

A recent study published in the journal Phytotherapy Research showed that curcumin may be more effective in treating depression than many common antidepressants.

Depression is a very common problem today, with an estimated 15-20% of the world’s people suffering from it. Fast lifestyles and high expectations, low social support networks and unhealthy lifestyles often lead many people to a situation where therapy is no longer enough and mood disorders need to be controlled with medication.

The most common drugs today are tricyclic antidepressants, and serotonin and norepinephrine reuptake inhibitors. However, all these medications have serious side effects.

Researchers compared the effects of curcumin in turmeric and Prozac (fluoxetine) both together and separately in 60 patients diagnosed with major depression. Subjects received fluoxetine (20 mg) and curcumin (1000 mg) alone or in combination for six weeks.

The study concluded that this herb was as effective as Prozac in treating depression, but it did not have the serious side effects of the drug, so in reality the comparison of these medicines is strongly on the turmeric side. The known side effects of Prozac are suicidal thoughts and psychotic disorders.

Moreover, no side effects have been observed with curcumin and even up to 8 grams of curcumin per day has been found to be well tolerated by patients. In China, turmeric has been used as an antidepressant for centuries.

4. In addition to its antibacterial properties, turmeric has an analgesic effect

This herb lowers harmful cholesterol levels and inhibits the formation of blood clots by blocking the production of inflammatory substances (prostaglandins).

7. Curcumin may help with arthritis

Also many other studies have looked at the effects of curcumin and noted improvements in various arthritis symptoms.

It has been found to be excellent in relieving and preventing metabolic syndrome by lowering blood fat levels, helping to regulate metabolism and losing weight.

One study concluded that curcumin intake among patients with metabolic syndrome and related disorders was correlated with a significant reduction in BMI, weight, and a significant increase in adiponectin levels, but did not affect HR.

Curcumin can cross the blood-brain barrier and prevents the formation of protein tangles called amyloid plaques in the brain, thereby reducing the risk of developing Alzheimer’s disease and alleviating pre-existing disease.

However, whether it can really reverse the progression of Alzheimer’s disease in people is unsure at present and needs to be studied properly.

Curcumin is successfully used to treat inflammatory skin diseases, including acne and psoriasis.

Curcumine has the effect of accelerating wound healing and skin recovery.

12. Helps in case rheumatism and osteoarthritis

The anti-inflammatory properties of curcumin show excellent efficacy in the treatment of diseases associated with systemic inflammation (e.g. rheumatism and osteoarthritis).

13. Reduces the symptoms of aneurysm

Curcumin reduces the symptoms of aneurysm (blockage of the wall of a blood vessel).

Cancer is described by uncontrolled cell growth, and there are many different forms of cancer. However all different types of cancer still have a number of things in common, and some of them appear to be affected by curcumin supplements.

It’s because this herb has been found to affect cancer growth, development and spread at the molecular level that may help prevent and perhaps even treat cancer.

Also, there is proof that curcumin may prevent cancer from occurring in the first place, especially cancers of the digestive system like colorectal cancer.

However, whether high-dose curcumin can help treat cancer has not been studied properly yet and it’s too early to say for sure, but it looks promising and is being intensively studied.

15. It is a great help in relieving digestive problems

16. Curcumin has a role in systemic and oral health

Due to the antimicrobial, anti-inflammatory, antioxidant, hepatoprotective, immune boosting, and antiseptic properties, it is quite useful in dentistry as well. It has a role in the treatment of periodontal diseases and oral cancers.

Turmeric can also be used as a pit and fissure sealant, mouth wash, and subgingival irrigant in different preparations.

Curcumin has a role in restoring the damage and it also helps your body to combat foreign invaders. It can suppress many molecules known to play major roles in inflammation. Therefore, curcumin is strongly anti-inflammatory.

In fact, it’s so powerful that it has the same effectiveness as some anti-inflammatory drugs, but without the side effects.

Antioxidants are so beneficial because they protect your body from free radicals that damage cells and can cause oxidative stress. Curcumin is a potent antioxidant that can neutralize free radicals due to its chemical structure.

Also, it improves the immune system 5-8 times better than vitamin c, precisely because of the high content of antioxidants. Curcumin is even so strong that it wipes out hydroxyl radicals, which some consider the most reactive of all antioxidants.

Therefore, it improves the resistance of cells to infections and malignancies.

19. In addition, curcumin boosts the activity of your body’s own antioxidant defences

Curcumin delivers a one more punch against free radicals. For instance, it blocks free radicals on its own, but also stimulates your body’s own antioxidant defenses.

Brain-derived neurotrophic factor (BDNF) is a type of growth hormone that functions in your brain, and many common brain disorders like Alzheimer’s disease and depression have been linked to decreased levels of this hormone.

However, curcumin can increase brain levels of BDNF, which also increases the growth of new neurons and may be effective in delaying or even reversing many brain diseases and age-related decreases in brain function.

Curcumin may also boost the brain neurotransmitters serotonin and dopamine.

21. Curcumin may lower your risk of heart disease

In addition, curcumin may help reverse many steps in the heart disease process. Together with exercise it improves the function of the endothelium, which is the lining of your blood vessels and plays a major role in regulating blood pressure, blood clotting and various other factors.

Above all, due to its many positive health effects, such as fighting against oxidation and inflammation, the potential to prevent heart disease, Alzheimer’s and cancer, curcumin may also aid longevity and has become very popular as an anti-aging supplement.

The following recommended doses of curcumin are taken from a report in the Natural Medicine database, but it is always advisable to consult your doctor when using turmeric and curcumin for therapeutic purposes: