Dandelion (Taraxacum officinale) has been cherished for its tremendous healing properties since ancient times. It is a symbol of the true perseverance of nature. Although this plant has a high value, it can be quite a troublesome for the gardeners.

In this article we write about 18 benefits of the dandelion which are all backed by science.

Traditional and Modern Uses of Dandelion

According to Chinese old medical text (659 A.D), this plant was used at the time for example to treat  indigestion, inflammation of the caecum and inflammation of the breast. In the West, the dandelion became known as a medicinal plant around the 10th and 11th centuries, when an Arab healer wrote about the usefulness of this plant in his medical journal. Once introduced in Europe, dandelion became a valued medicinal plant throughout Europe.

In folk medicine, dandelion is referred to as the elixir of life because it purifies the body of residues and negative energies. Because of its cleansing effect, it is also called blood purifier, laxative agent, liver cleanser and fatigue remover.

Today, dandelion is used to treat skin conditions, lymphatic inflammation, anemia, to improve gastrointestinal tract function and liver metabolism. The bitter ingredients in dandelion flowers are extremely beneficial to the body by stimulating the activity of the stomach and digestive glands, thus promoting the digestion of food. This flower surpasses any vegetable in its richness of nutrients.

You can eat all parts of the dandelion – flowers, stems, leaves and roots. However, the root contains the most active ingredients just at the time of flowering. In addition, the roots include many beneficial and valuable substances that have a overall strengthening effect on the body, such as up to 15% protein, inulin, 10% glycoside taraxacin, unsaturated acids and bitter substances. 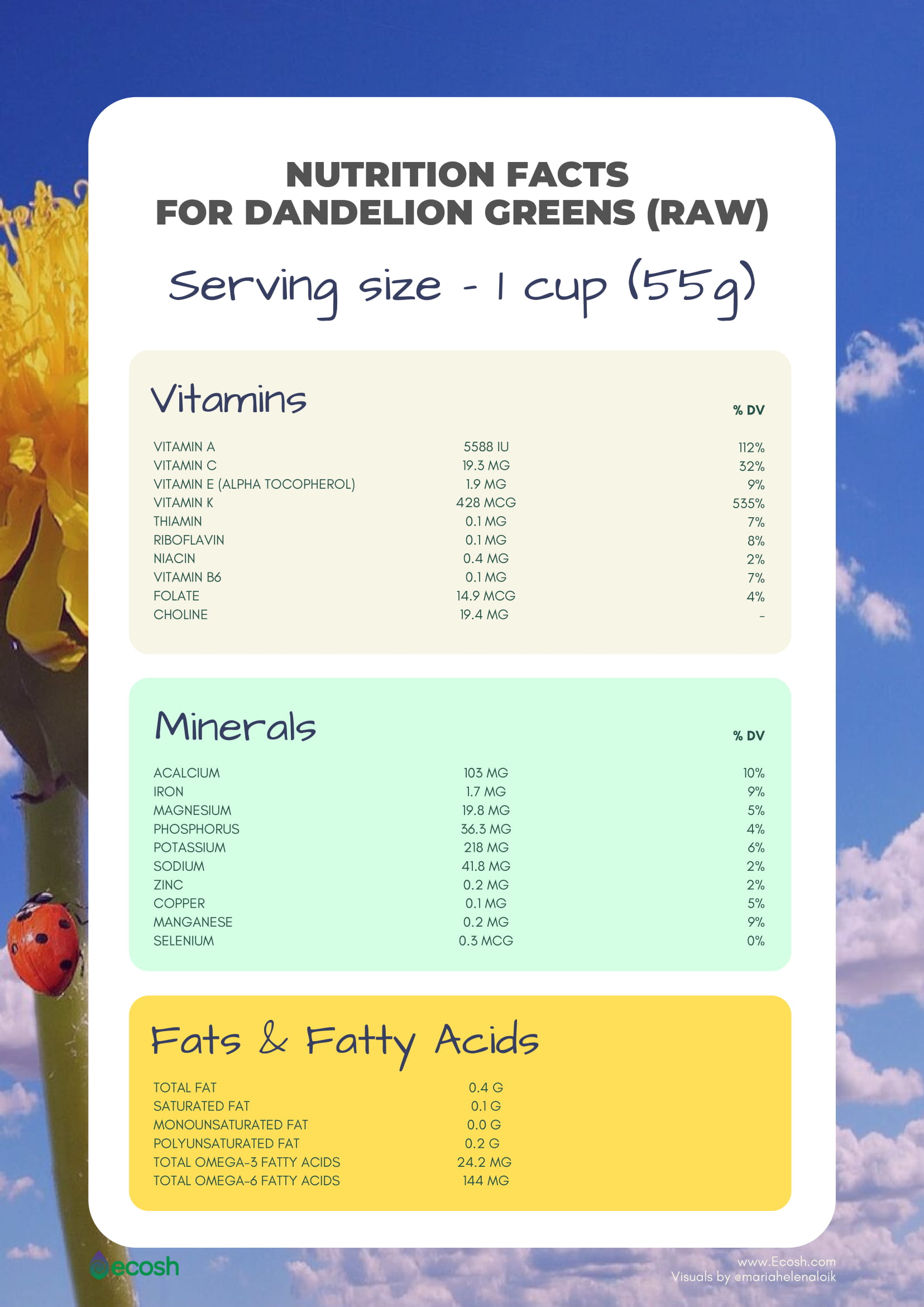 Dandelion has been recommended to use as a diuretic. However, it is not yet known which substances are responsible for the diuretic effect (the increased production of urine). Some scientists have suggested that the diuretic activity of this plant may be due to the high potassium content of the leaves and roots.

Although most conventional diuretics reduce the amount of potassium in the body, dandelion contains so much potassium that, despite its diuretic action, it does not lower potassium levels.

What is a Diuretic?

Diuretics are substances that promote diuresis, the increased production of urine. They are also anti swelling agents. Diuretics promote the elimination of electrolytes and water from the body through a variety of mechanisms, thereby reducing the amount of extracellular water.

Some animal studies have shown that dandelion can help to normalize blood glucose levels. Also, it has an antimicrobial, antibacterial, anti-inflammatory and antioxidant properties.

This mighty root boosts immune system and improves blood. According to Dr. Carolyn Hamm from the Windsor Regional Cancer Center in Ontario, Canada – dandelion root extract is the only thing that helped with chronic myelomonocytes. This form of cancer usually affects older people.

For example, John Di Carlo, a 72-year-old cancer patient in a hospital, was sent home to die after all efforts to cure his leukemia failed. He told CBC News that as a last chance, it was suggested to him drink dandelion tea. Maybe it should have been the first choice in his treatment plan, because the cancer came back only four months later. His doctors associated it with drinking of dandelion tea.

Recent studies have shown that dandelion root extract can work very effectively on cancer cells, as demonstrated by Di Carlo’s practice. Within 48 hours after contact with the dandelion extract, the cancer cells began to degrade. The body replaced them with whole new cells.

In addition, further studies have shown that the extract is also useful for other cancers such as breast, colon, prostate, liver and lung cancer. The taste of dandelion root tea is not as pleasant as other teas, but it is certainly more comfortable than undergoing chemotherapy or radiation therapy.

However, Dr. Hamm warns that the root extract can negatively affect the effects of chemotherapy. Therefore, it is always better to consult your doctor about your diet and consumed food supplements.

For example, dandelion roots and stems help fight diabetes. It`s because they stimulate the pancreas to produce insulin, which in turn stabilizes the blood sugar level.

If you have digestive problems or you need to get rid of toxins, the dandelion tea may be exactly what your doctor prescribes as a herbal remedy. The liver produces bile in the digestive system and also filters blood from chemicals and other impurities. According to Dr. Ax, vitamins and minerals found in this plant help to cleanse and maintain the liver.

These beautiful yellow flowers are also rich in antioxidants and vitamin C, which help the body fight infections such as bacteria that cause urinary tract infection. However, if you start to drink dandelion tea every day – you can defeat this health issue.

Leaves are bitter but perfectly edible. The leaves are high in fiber, which helps improve bowel function. In addition, fiber reduces the risk of obesity, heart disease and irritable bowel syndrome. The leaves are also high in vitamin A – one cup contains 100% of your daily requirement. Vitamin A is critical for maintaining healthy eyesight and also helps prevent premature skin aging.

If you don’t want to eat a cup of bitter leaves, you can add them to your morning smoothie or salad. Mix them in your blender with your favorite fruits or vegetables that balance the bitter taste. 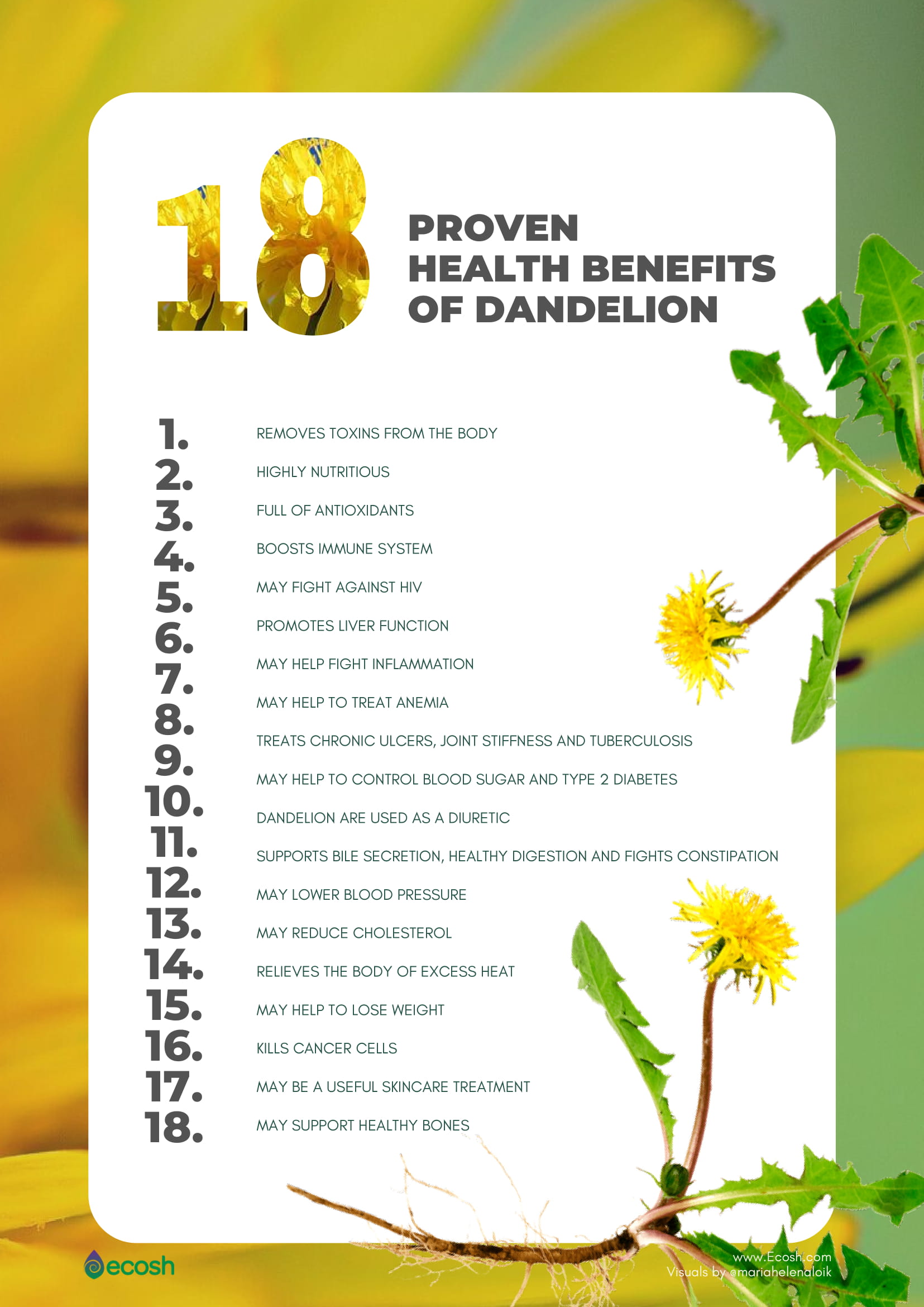 18 Benefits of Dandelion Backed by Science

1. One of the most effective toxin removers (blood, lymph and liver cleanser)

Dandelion is a source of fibres and vitamins A, C, K, E, folate and small amounts of other B vitamins. It provides minerals like iron, calcium, magnesium and potassium.

3. Dandelion are full of antioxidants

Antioxidants are molecules that help neutralize or prevent the negative effects of free radicals in your body. In addition, antioxidant capabilities can prevent aging and certain diseases.

Studies have found that dandelion extract has an antiviral and antimicrobial effect, thus, making it an antibacterial agent.

5. May fight against HIV

Studies have demonstrated that dandelion extract powerfully acts against HIV-1.

6. Promotes liver function and is an excellent liver cleanser

Animal studies have found that dandelion has a protective effect on liver tissue in the presence of toxic substances and stress. The results of the Studies have also indicated, that this plant may represent a promising approach for the prevention and treatment of obesity-related nonalcoholic fatty liver disease.

Inflammation is one of your body’s natural responses to illness. However, excessive inflammation can lead to permanent damage to your body’s tissues and DNA. Studies have revealed that dandelion can be an anti-inflammatory agent.

8. May help to treat anemia

Because of its high iron and zinc content, it is used to support the treatment of anemia.

9. Support the treatment of chronic ulcers, joint stiffness and tuberculosis

10. May help to control blood sugar and type 2 diabetes

Chicoric and chlorogenic acid are two bioactive compounds in dandelion which may help reduce blood sugar.

11. Dandelion are used as a diuretic, for increasing the production of urine

Dandelion may lower blood pressure due to their diuretic effect and potassium content.

Some of the bioactive compounds in this plant may lower cholesterol, which may decrease heart disease risk.

14. Relieves the body of excess heat

15. May help to lose weight

Some researchers theorize that dandelion’s ability to improve carbohydrate metabolism and reduce fat absorption may lead to weight loss. However, this notion needs further studies.

Other test-tube studies have shown that dandelion root extract has the capacity to dramatically slow the growth of cancer cells in liver, colon and pancreatic tissue.

One animal study revealed a significant increase in the rates of stomach contractions and emptying of stomach contents into the small intestine in rats who were treated with dandelion extract.

18. May be a useful skincare treatment

Animal and test-tube research indicate that dandelion may protect against skin damage from sunlight, aging and acne.

In addition, the green parts of this plant are a good source of calcium and vitamin K — both of which are associated with the prevention of bone loss.

Be careful when you consume dandelion root as the plant can cause excessive excitement. In addition, this plant can cause cardiac arrhythmias, nausea, vomiting and diarrhea. Therefore, we recommend to consult with a qualified therapist or physician when you are pregnant, breast-feeding or taking other different medications.

You can eat dandelion leaves, stems and flowers in their natural state – raw or cooked. Roots are usually dried, ground and consumed as a tea or extract. This superpalnt is also available in dietary supplemental forms, such as extracts, tinctures and capsules. However, there are no clear consensus on dosage guidelines.

PRIMARY COQ10 DEFICIENCY SYMPTOMS – What May Happen When You Don’t Get Enough Coenzyme Q10?