Cordyceps – as powerful medicinal mushroom has been acknowledged in Chinese medical books and Tibetan medicine already long time. This plant is a rare combination of caterpillar and fungus. Cordyceps grows in Sikkim, an Indian state bordering Nepal, Tibet and Bhutan, at altitudes above 4,500 m. Two of the over 400 species of Cordyceps have become the main priority of health research – Cordyceps militaris and Cordyceps sinensis.

Traditional healers and local people of Sikkim suggest Cordyceps sinensis for multiple health problems as a single drug or together with other herbs. These folk healers use it to cure as much as 21 different health conditions.

In traditional Chinese medicine, it has been hand-picked and dried for centuries to treat fatigue, kidney disease, low sex drive and many more illnesses. The long history and the magnificent benefits of Cordyceps might be the reasons why food supplements and other products containing Cordyseps are achieving so much admiration.

In this article, we look at the 14 potential benefits of Cordyceps based on scientific research.

In one study scientists tested the effects of Cordyceps on physical performance. Researchers found that the group given the most of the product containing Cordyceps experienced improved lactate clearance due to improved lactate energy metabolism within the cell.

Another study (2017) found that acute supplementation with a Cordyceps militaris containing mushroom blend may improve tolerance to high intensity exercise, and greater benefits may be elicited with consistent chronic supplementation.

Studies have shown that taking Cordyceps improves physical performance and tolerance to high intensity exercise. However, according to some recent studies, consuming Cordyceps or a combination of roseroot and Cordyceps does not improve physical durability in trained male cyclists.

One study investigated the effect of Cordyceps on physical fatigue in animals through a forced swimming test.

The results showed that Cordyceps could significantly:

One study done on mice showed that Cordyceps may also have  an effect against fatigue.

Another study found, that after taking Cs-4 (Cordyceps sinensis) for 6 weeks, VO2max were significantly increased. VO2max is the maximum (or optimum) rate at which the muscles, lungs and heart can efficaciously use oxygen in the course of exercise. It is used to measure a person’s individual aerobic capacity.

Researchers concluded, that these findings support the belief held in China that Cs-4 could improve oxygen uptake or aerobic capacity and ventilation function, and resistance to fatigue of elderly people in exercise.

3. Cordiceps Has an Anti-Aging Effect

It is believed, that Cordyceps sinensis is an anti-aging traditional Chinese herb, and now the scientists have proved it to be the true. One study made on mice, demonstrated, that mice who received Cs-4 (C. sinensis) lived several months longer than mice who received placebo.

In conclusion, researchers found that Cs-4 reverses age-related changes in gene expression (GE) and extends the lifespan of mice, supporting the traditional belief that Cs-4 conveys anti-aging benefits to humans.

Also several other studies done on mice have demonstrated that Cordyceps can improve the brain function and antioxidative enzyme activity in mice with d-galactose-induced senescence and promote sexual function in castrated rats. All these studies indicate that Cordyceps may have an antiaging effect.

Another study found that C. sinensis oral liquid (CSOL) prolongs the lifespan of the fruit fly, Drosophila melanogaster, by inhibiting oxidative stress. So CSOL may thus be explored as a novel agent for slowing the human aging process.

According to experiments done on mice – Cordyseps has an anti-aging effect.

4. Polysaccharides From the Cordyceps Show Antioxidant and Immunoenhancing Activities

Antioxidants are molecules that protect cells from harmful effects by neutralizing diseases and aging-promoting free radicals. The good news is that studies done on mice suggest that Cordyceps increases the antioxidant levels.

In one study, researchers systematically investigated the antioxidant pharmacological properties of Cordyceps taii.

These findings suggest that the polysaccharides are a promising source of natural antioxidants and anti-aging drugs.

The results of one study showed that CMP (Cordyceps militaris) could inhibit mitochondrial injury, swelling and it also had a significant superoxide anion scavenging effect. Moreover, CMP significantly increased the activities of CAT, SOD, GPx and anti-hydroxyl radicals in mice liver.

These results indicate that CMP protects mitochondria by:

Therefore, C. militaris may have anti-aging value and also pharmaceutical use for mitochondrial protection.

One study investigated the impact of Cordyceps sinensis extract (CSE) on castrated rats and mice to researche its anti-aging effect. Tests made to examine the effect of CSE on learning and memory. Cordyceps sinensis prolonged step-down latency, decreased escape latency, and reduced the amount of errors in mice who where aged by d-galactose.

The study also analyzed the influence of CSE on the action of age-related enzymes in the aged mice. According to the results, CSE enhanced the action of glutathione peroxidase, catalase and superoxide dismutase and also decreased the monoamine oxidase activity and level of lipid peroxidation.

The study showed that CSE enhances the antioxidative enzyme action and boosts the brain function in mice with d-galactose-induced senescence and also improves sexual ability in castrated rats.

Recently, the researchers have been taking an interest on the potential anticancer and antitumor action of Cordyceps. Extracts from fruiting and mycelium bodies of C. sinensis, C. militaris and other Cordyceps species have shown significant anticancer activities by various mechanisms such as, modulating immune system and inducing cell apoptosis.

Some polysaccharide components and cordycepin (3′-deoxyadenosine) in C. sinensis and C. militaris have acted as potent anticancer components.

Several studies have shown that Cordyceps can inhibit the growth of several human cancer cells, including lung, colon, skin and liver cancer cells. This supports the potential of this extract as a source of bioactive compounds, which may be used in anticancer strategies.

Tests on mice have shown that Cordyceps can also have antitumor effects on lymphoma, melanoma cells, and lung cancer.

In one study, the cultivated mycelium of a Cordyceps sinensis (Cs) extracts showed a significant and dose-dependent inhibitory effect on the proliferation of four cancer cell lines:

In an animal test, the EtOAc extract showed significant inhibiting effect on B16-induced melanoma in mice, causing about 60% decrease of tumor size over 27 days. These results suggest that the EtOAc extract of Cs has strong anti-tumor activity and is a potential source of natural anti-tumor products.

Tube and animal studies have shown that Cordyseps can be helpful in treating cancer, decrease tumor as well as mitigating some of the side effects of cancer treatment. However, further human studies are needed.

Diabetes is a disease in which the body either does not produce insulin or is resistant to it. Insulin is a hormone that transmits glucose to the cells where it is converted into energy.

When your body does not produce enough insulin or the body develops resistance to it, glucose cannot enter the cells and will remain in the blood. Over time, excess blood glucose can lead to serious health problems. Therefore, diabetics should monitor their blood glucose levels.

In an other study Cordyceps showed antinephritic and antidiabetic action in diabetic rats.

Finally, the results of the third study demonstrated that Cordyceps (Cm) increased insulin sensitivity and decreased blood glucose level without changes in body weight. These results indicated that Cm possesses strong anticholesterolic, hypoglycemic and antihypertriglyceridemic activity and may be an economical alternative for Diabetes care.

There is also evidence to suggest that it helps to prevent a common complication of diabetes, kidney disease. A review of 22 studies involving a total of 1,746 patients with chronic kidney disease showed that patients taking Cordyceps supplements had improved kidney function.

More specifically, they found that Cordyceps preparation, showed potential promise to decrease serum creatinine, increase creatine clearance, reduce proteinuria and alleviate chronic kidney disease associated complications, such as increased hemoglobin and serum albumin. However, definitive conclusions could not be made because of the low quality of evidence.

Cordyseps effect on other kidney injuries

Hepatitis B virus (hepatitis B) can cause the swelling (inflammation) of the liver. However, according to some early proof – taking Cordyceps orally might better liver function in hepatitis B patients.

Fresh studies are growingly showing the benefits of Cordyceps to the hearts health. China has officially approved this drug for arrhythmia (a condition where the heart beat is too slow, too fast or irregular.

In one study, the oral administration of C. sinensis significantly redused the liver and heart injuries in rats. Cardiac injury caused by chronic kidney disease is thought to increase the risk of developing heart failure.

The results of an other study showed a repressive role of Cordyseps in ischemic contracture. Cardiovascular protection and antioxidant activity of the extracts from the mycelia of C. sinensis act partially via adenosine receptors.

Cordyceps has also been shown to have lipid-lowering effect in hyperlipidemic hamsters and rats.

The results on one study suggested that levels of:

Triglyceride-rich (TG) lipoproteins are a type of fat in the blood. Their high levels in the body are associated with an increased risk of heart disease.

Cordyceps can be beneficial for heart health by helping to prevent arrhythmias and by lowering triglycerides and ‘bad’ LDL cholesterol levels.

13. Cordyceps Can Help Against Inflammation

Although inflammation can sometimes be good, excessive inflammation can cause diseases such as heart disease and cancer. Studies have found that Cordyceps sinensis is an immunomodulatory agent, and that immunosuppressive ingredients are contained in C. sinensis.

The results of one study demonstrated that Cordyceps suppresses the production and expression of:

These findings suggest that Cordyceps has modulatory effects on the inflammatory system in macrophages, and that it can serve as a useful anti-inflammatory dietary supplement or drug.

Cordyceps reduces inflammation in the airways in mice, making it a potential cure for asthma. However, fungus appears to be less effective than commonly prescribed drugs. 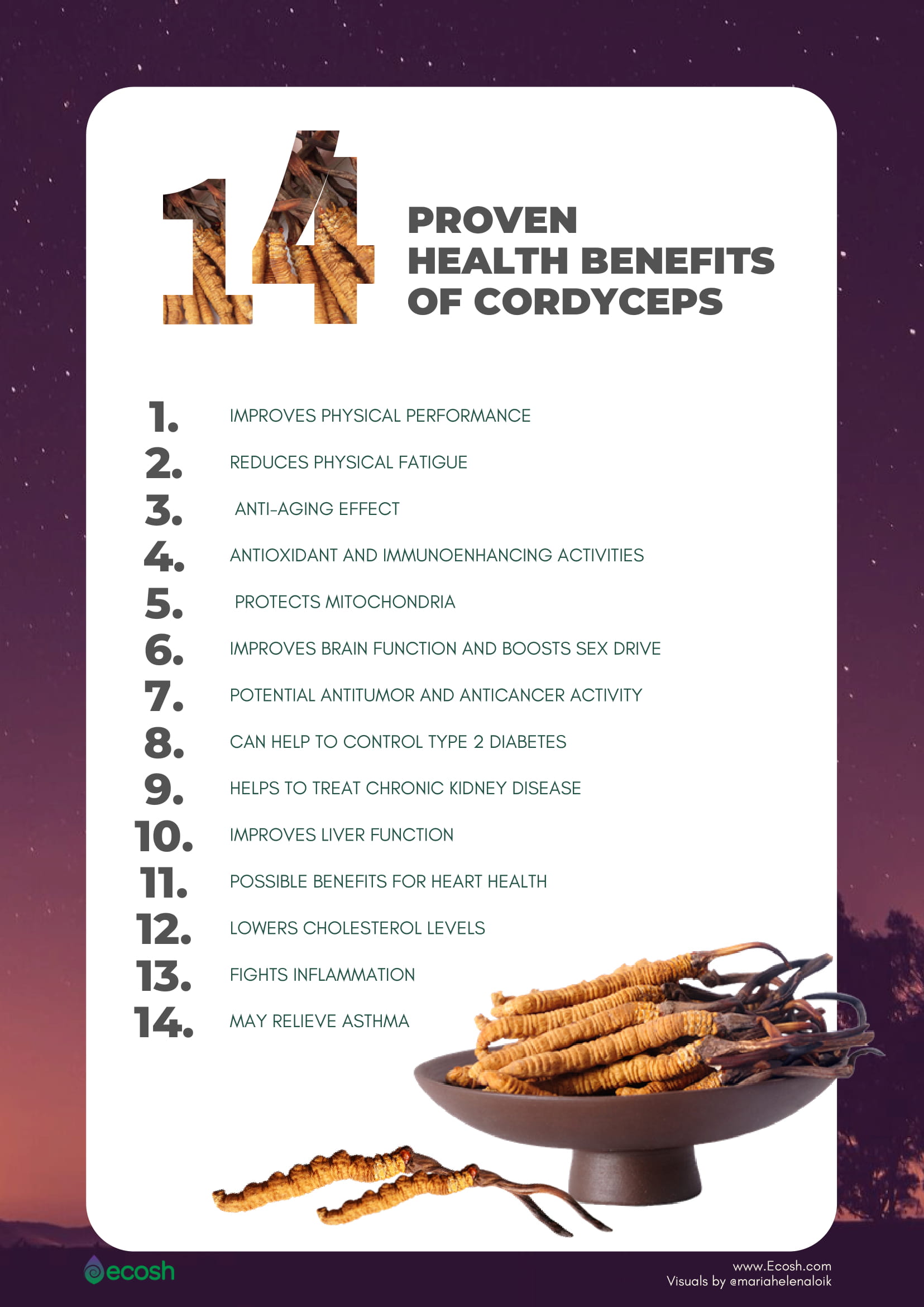 The price per kg of Cordyceps is extremely high because it is difficult to harvest. Therefore,  supplemethents mostly contain a laboratory grown form called CS-4. To ensure you buy high-quality supplements, always read the product label and look for the respected brands such as Ecosh.

Due to limited human studies, there is no consensus on dosage. In general, doses ranging from 1000 mg to 3000 mg per day have been used in human studies. Within this range, the dose has not produced any side effects.

Side effects and safety

However, the safety of the use of Cordyceps in humans has not been studied. But its long-standing use in traditional Chinese Medicine suggests that it is not toxic and safe to use. In addition, the Chinese government has approved the use of CS-4 in hospitals and has recognized it as a safe natural medicine.