Vitamin K refers to a group of structurally similar, fat-soluble vitamins that the body needs to produce a protein (prothrombin), which promotes blood clotting and regulates bone metabolism. In other words, it produces the necessary components without which the blood coagulation process would not work. Vitamin K naturally occurs in two forms:

The body needs vitamin K for the carboxylation of glutamic acid (Gla), in other words for carbon binding. The presence of Gla in certain proteins also allows binding of calcium. Bone tissue consists several Gla-containing proteins, some of which play an important role in the regulation of bone growth and mineral deposition, but also in the elasticity of soft tissues.

Recent clinical studies have shown that taking vitamin K2 supplement could help reduce the bone loss that women suffer with age and could also improve cardiovascular health through the reduction of arterial stiffness.

Even more, taking vitamin K2 supplements could also help prevent the loss of elasticity in the skin and reduce varicose veins. That`s why it is nature’s unacknowledged anti-ageing supplement.

How do We Get this Vitamin – The Best Natural Sources

Our body absorbs vitamin K from the small intestine, after that it is transported to the lymph. The lymphatic system stores it in the liver, but also in bone tissue, adipose tissue, the pancreas and the heart. When looking at the supply of various fat soluble vitamins in the body, the total supply of vitamin K is quite modest. This is primarily due to the rapid effect of phylloquinone synthesis.

Therefore, it is very important to ensure a steady supply of this vitamin. As even a short period without the necessary sources will cause a rapid drain in your body vitamin stocks. Health problems such as poor absorption of fats directly affects the absorption of vitamin K, because without dietary fats, it cannot absorb properly. 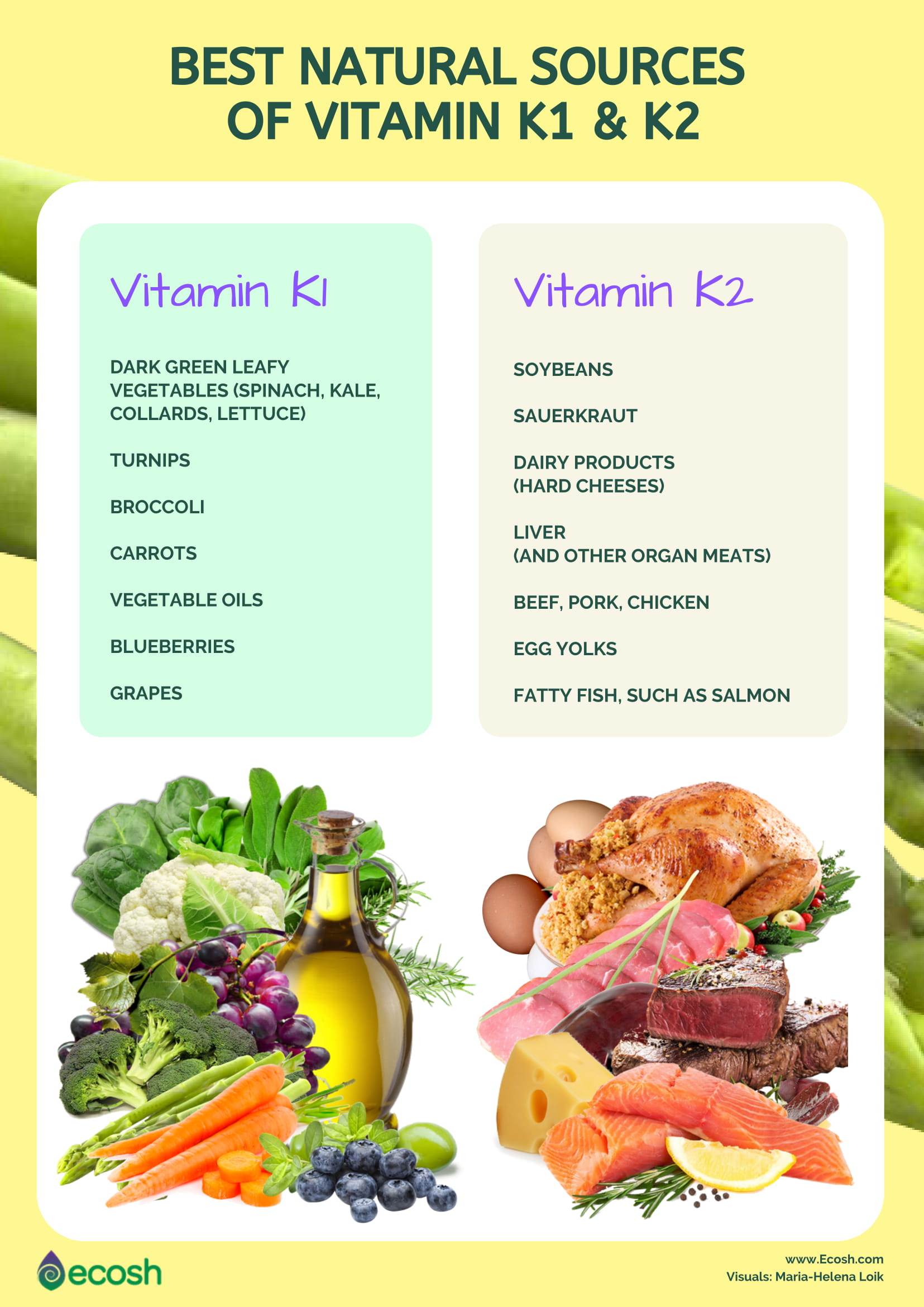 According to a study done in 2019, vitamin K2 (in the form of MK-7) is 10 times more absorbable than vitamin K1. It has been found, that vitamin K from menaquinones, in particular all-trans MK-7, will give the best results. The MK-7  is preferred over both – phylloquinones and other menaquinones (such as MK-4), mainly because of its longer duration of action.

Therefore, the same amount will at substantially the same time, do more work, thus having a much greater efficacy at the usual dose. It is important that, for example, before taking MK-7 supplements, you determine that it is an all trans variant.

The first symptom of vitamin K deficiency is bleeding. It is especially dangerous for newborns, as they may have intracranial bleeding due to a deficiency of this vitamin.

The main risk of suffering from deficiency is due to inadequate absorption of this vitamin because of the use of antibiotics, blood thinners and parenteral nutrition.

Your daily diet can also be the cause of insufficient absorption. Because the absorption directly depends on the amount of consumed fats, so if your diet does not consist enough fats, vitamin K cannot absorb. At the same time, the fact that some persons cannot break down fats, can influence the absorption. For example, this can occur in case of removed bile.

It is extremely important for people taking these medications to consume the same amount of dietary vitamin K supplements each day. Also, it is vital to speak to a doctor before taking supplements or making any dietary changes.

There is no consensus on how much vitamin K should be consumed, because it is almost impossible to achieve clinical deficiency symptoms with poor nutrition. However, the estimated daily requirement is about 75µg. Our own microbiome also produces vitamin K2, but it is certainly not enough to maintain normal levels.

The recommended daily intake, regardless of age, is 1 µg / kg body weight.

The average amount of vitamin K in breast milk is 2.5 µg / l. However, this is too low, so newborns will get prophylactic injections of this vitamin to prevent both – brain and other bleeding.

In case of taking naturally sourced vitamin K, there has not yet been found upper limit or toxic amount, but that does not mean that it may not be. Therefore, you should not over-consume the recommended amount on your own initiative. However, the synthetic version of this vitamin can have a negative effect on the liver and hematopoiesis.

For conclusion, if you do not have a varied diet, it is worth to take vitamin K2 dietary supplements.