Fibres has long been considered irrelevant to human health. However, today many studies have proven that fibres play an important role in the human digestive process, being an important part of a healthy diet. That said, in order for the digestive system to function normally and prevent many diseases, we all need fibres daily.

A diet low in fibres can lead to the following common ailments and diseases such as:

However, you should not confuse fibrous food with fibres – although the meat may be fibrous, it does not contain any fibers.

The fibres consist of non-starch polysaccharides such as:

The first major group includes glycemic carbohydrates that are digestible and absorbable. These carbohydrates supply body mainly with glucose (starches and sugars). Glucose is the main fuel for most cells in the body. However, the liver and muscles store it as a glycogen. Because your body uses glycogen in liver to keep blood glucose levels normal during the meals.

The second group consists of fibres that are mainly indigestible and pass along to the large intestine, forming substrates necessary for the microbiota. Microorganisms living in the large intestine are capable of partially digest fiber, which is a food source for the digestive tract microbes.

In turn, these microbes play an important role in protecting the human body.

Only fiber-based plant foods are the main sources of fibres:

You can find most fibres in the bark and other hard tissue parts of the plants and in the whole grains shells and seed shells. This is also the reason why you should eat fruits (grown without plant protection products) with peels, and why whole grain flour is healthier choice than the usual flour.

For example, apple juice does not contain as much fiber as apple itself, because the fibers in the apple pulp remain on the strainer when making the juice.

Water Soluble and Insoluble Fibres – Why are Both Fibres Important

Oats, psyllium (1 tablespoon contains 5 g soluble and 6 g insoluble fiber) and flax seeds are the most fiber-rich foods, because they are abundant in both fibres.

Good sources of water-soluble fibre are:

Some water-soluble fibres form a gel when contact with the liquid. This helps to slow the absorption of glucose in the stomach and small intestine. One such fiber is pectin.

Pectin is a natural gelling agent which is found abundantly in rowan berries, plums, black currants, lingonberries and apples, but also in many other berries and fruits. Pectins normalize carbohydrate and fat metabolism. This type of fibre (pectin, oat bran, flax seed, psyllium) has the unique ability to absorb water 4-6 times its volume, forming a gel-like mass in the stomach.

That is why products containing this type of fibres are more likely to induce a feeling of fullness, which prevents overeating.

In addition to its gelling properties, pectin in berries and fruits is very healthy as a water-soluble fiber. It reduces blood cholesterol levels, neutralizes heavy metals and harmful compounds in the digestive tract. Pectin is also an excellent remedy for constipation.

Pectin is most present in the ripening fruit, but during maturation the pectin content is constantly decreasing and eventually reaches close to zero. Commercially, pectin is prepared from citrus or apple peels. You can find it in liquid form or as a powder.

In E-numbers, that appear in food labeling, the pectins code is E440.

Water-insoluble fibers soften the intestines, increase its volume and accelerate food passage through the small intestine.

Good sources of water-insoluble fibre are:

Cellulose is a naturally occurring fibre (polysaccharide (carbohydrate)) in plant cell membranes. It is composed of β-D-glucopyranose residues. The cellulose, which is a building material for plant cell membranes has a linear chain and relatively rigid structure. It gives the plants their main strength.

Lack of fibres interferes with the flow of food and the synthesis of vitamins in the intestines, which can stimulate constipation and the accumulation of harmful residues. However, too much fibre causes the content of intestines to be excreted too quickly and reduces the length of time the food is in each part of the intestine.

This degrades digestive quality and nutrient absorption, and can lead to a shortage of nutrients in the body that are vital for cellular activity.

Also, excessive diets high in fiber will cause uncomfortable feeling of fullness and gas. Therefore, it is necessary for you to maintain a healthy and balanced consumption of fibres. 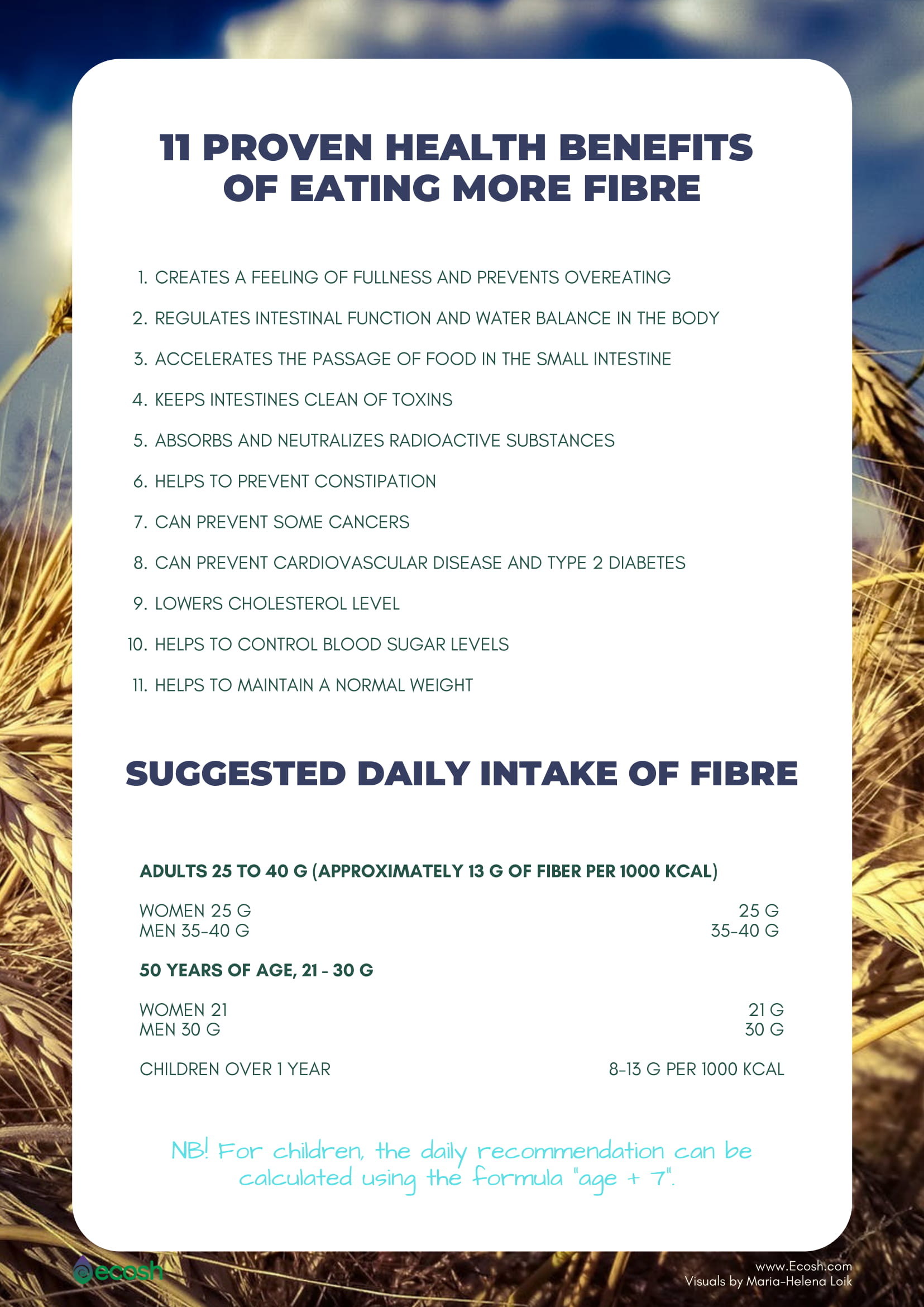 Increase the amount of fibres you take in gradually. An adult should receive 25 to 40 g of fibre per day depending on their daily energy requirement (approximately 13 g of fiber per 1000 kcal). Women need 25g and men 35-40g a day. After 50 years of age, 21 grams of fibre are recommended for women and 30 grams for men. For children over one year, a daily fiber intake of 8-13 g / 1000 kcal is recommended.

For children, the daily recommendation can be calculated using the formula “age + 7”. Extreme intake of fibre is undesirable because of the risk that some of the minerals which the body needs cannot be absorbed.

Numerous studies have show that fibres help to reduce the risk of becoming overweight and promote maintaining a healthy weight. High-fiber foods usually require longer chewing time – this gives the brain time to signal that the stomach is full and stop eating.

That is why fibers reduce the risk of overeating. Fibers absorb water, swell in the stomach and quickly create a feeling of fullness. High-fiber foods are usually lower in calories than many other foods.

Because of the high levels of lipids (triglycerides, cholesterol) in the blood vessels, the plaques which consist from fatty tissue, can be formed and deposited on the inner artery. Even worse, this can later lead to hardening of the arteries and they can become calcified. As a result, the elasticity of the blood vessels is reduced, blood vessels are narrowing, and becoming hard and brittle.

In more severe cases, such a plaque can grow to fill the entire lumen of the artery, producing a blood clot. The calcifications in the coronary arteries and the thrombi attached to them cause myocardial infarction.

Fibre promotes cholesterol excretion. Water-soluble fiber binds acids and cholesterol in the intestines and expels them from the body.

Diabetes (diabetes mellitus) is a metabolic disorder which can have various causes. It is characterized by long-term high blood sugar levels and disorders of carbohydrate, fat and protein metabolism. Diabetes is caused by either a lack of insulin or a reduction in the action of insulin, or both.

People who suffer from diabetes have double risk to develop heart disease. Fibers help to regulate blood sugar by slowing the conversion of carbohydrates into glucose. Glucose is released slowly into the bloodstream in smaller amounts. Blood sugar and insulin levels are kept stable.

Let us know if you liked the post. That’s the only way we can improve.
Tags: benefits of fibres, Detox and Lose Weight, Fiber rich foods, Fibers and diabetes, Fibers and kidney stones, How to lose weight, Insoluble fibre, Lose weight, Pectin, Remove cholesterol from the body, Remove toxins from your body, Water soluble fibre