Andropause, the so called male menopause is a common, but rarely talked about condition. So, what are the signs to indicate that you might experience andropause?

Here`s a question for you – are you a middle-aged man or approaching middle age, and supposed to be in your best years, but you start to notice the changes in your health and overall well being? Hair fall out? Low libido? No vitality? Muscles decrease, no strength and body fat increases?

If this is the case, it may be caused by the low levels of male hormones, which may culminate as an andropause or so called male menopause.

What Are Male Hormones And Testosterone?

It is important to have optimal hormone levels also when you are adult, as testosterone levels significantly influence the constant development of sperm (spermatogenesis), bone and muscle mass, prostate function, physical performance and potency.

Adequate levels of testosterone are also important for overall health, in terms of disease risk, body composition, sexual health and, in fact, just about anything else that is important to human health.

What is Andropause or So Called Male Menopause?

Andropause is a condition when the levels of male hormones, mainly testosterone, are so low that men’s vitality and overall health are adversely affected.

This condition is similar to menopause in women, but when the menopause generally occurs as expected in all women and within a fairly well-defined age range, it is slightly more complicated in men and often begins latent.

The levels of these hormones begin to decline in the early forties at a rate of about 1% per year. However, it is quite variable, and the speed and health effects of these changes depend on a variety of factors, such as heredity, diseases but also lifestyle.

Andropause prevalence in the world is around 7% among men aged 30-70 and is increasing with age.

However, it has been pointed out that this is an underdiagnosed health problem. So the percentage of men who suffer from andropause is probably significantly higher. Given the old truth that men visit doctors less, it’s not hard to believe. 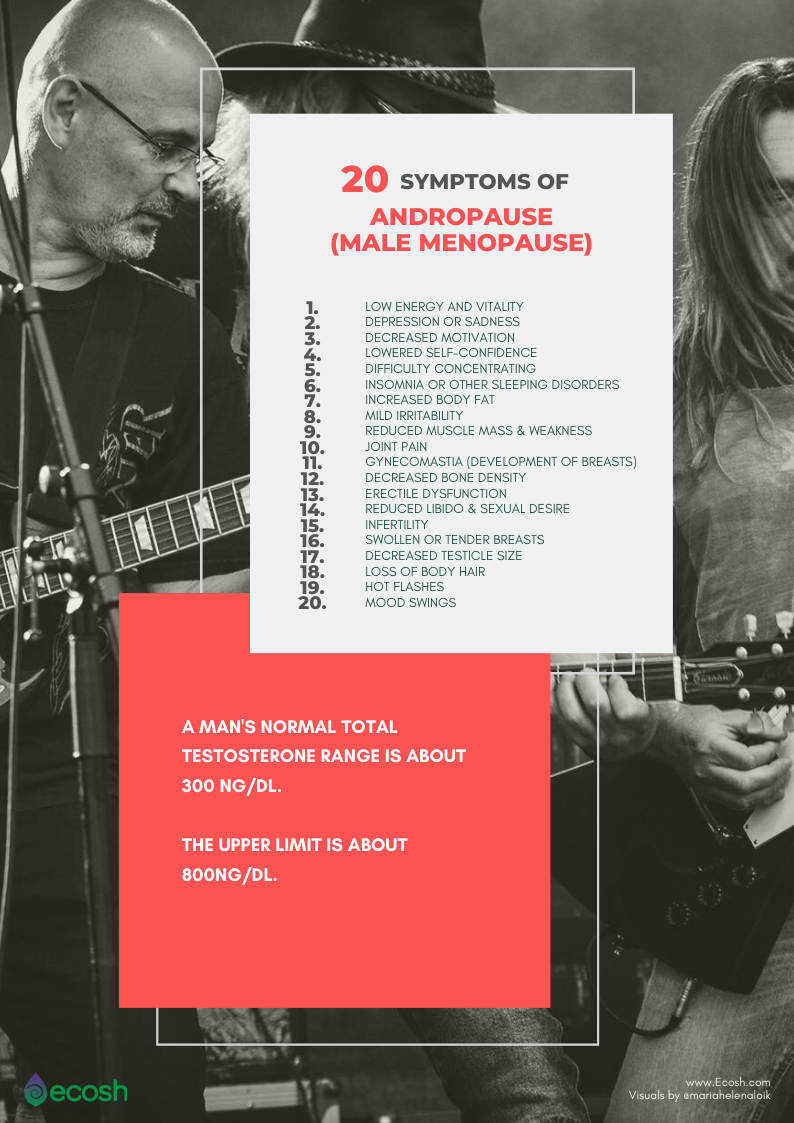 Male menopause can be the cause of not only sexual, but as well as physical and psychological problems. These symptoms commonly influence men at the same age as women are affected from menopause, and worsen as you get older.

Symptoms mainly involve lack of energy. The vitality you had earlier, has disappeared. Also, a decrease and loss of erectile dysfunction, which in turn leads to a decrease in sexual desire.

You may notice a loss of muscle mass and your previous strength is replaced by fat mass and joint pain. Usually, such a disorder only manifests itself in men around the age of 50, but the onset of these early symptoms occur in the early 30s.  However, usually they may go unnoticed. This condition is diagnosed through certain questionnaires, symptoms, and testosterone levels.

Symptoms of andropause can include:

Low levels of testosterone have also been associated with osteoporosis –  a health condition where the bones become brittle and brittle. However, these symptoms are rare.

Decrease in male sex hormones, as well as in testosterone levels, is growing with age. However, the rate of decline varies from individual to individual, indicating that there is much more to it.

As this is a very broad concept, with a considerable number of factors behind it, we only highlight the most important causes of andropause, that everyone can undoubtedly change for the better. However, lifestyle plays an extremely important role in testosterone levels.

Generally, chronic lifestyle-related illnesses such as obesity, type 2 diabetes, osteoporosis, and metabolic disorders can also influence testosterone level. Risk factors for andropause are also men-specific health problems, such as shrinking of the testicles (Testicular atrophy), and diseases affecting the testicles (such as inflammation and varicose veins).

People often talk about reducing the excessive stress. However, they rarely take the real steps. It is important to understand that this is not just a new health trend. Mental health is an important aspect of the concept of overall health and without it, you cannot be whole. Because the constant stress hormones interrupt the body`s hormonal balance.

Sleep affects our whole being – mood, appetite, vitality, overall health, including hormonal levels. So, pay off your sleep debt! Make sure you`ll sleep 7-8h every night. The quality sleep can not be the light blue dream that is achieved once a week, but a daily routine.

What and how much you eat has always been one of the most important aspects of human health. So it should come as no surprise that nutrition significantly affects our hormonal levels, including male hormones.

While striving for a normal weight is highly desirable and it is perfectly understandable that this journey is wavy, it is still not worthwhile to create the so-called yo-yo effect, where for a period of time you are in a high caloric deficit and at other times you overeat.

This causes excessive stress to the body and destroys the hormonal balance. Focus on officially recognized dietary recommendations and most importantly, follow your diet regularly.

Physical activity is the foundation of everything! Your body is designed to be in movement, and low physical activity causes many health problems. Compared to the time of our fathers, we have begun to be drastically less active. Living in the countryside and doing hard physical work is impossible for the most of us, but we can imitate it all in the gym.

It has been found, that weight lifting is particularly effective in raising testosterone levels.

However, all exercise is good for your overall health. So if you are chained to your office chair for 8 hours, do yourself a favor and take more breaks. This will allow you to lubricate your joints a little.

Avoid poisons and be aware, that estrogen mimicking chemicals adversely affect testosterone production. So try to avoid parabens, BPA, and other chemicals that are often found in plastic products or even in daily hygiene and skincare products.

Excessive alcohol, smoking and drugs are all poisons that cause our bodies to suffer in one way or another, but they also affect the productivity of male hormones. Try to eliminate them completely from your life, because there is nothing justifying in the use of these toxins when it comes to health.

Although Andropause is certainly not the case in all men, and its causes can range from heredity to life decisions, it is important to understand that it is curable.

If you are a man over 30 and recognize the symptoms when reading this article, we strongly suggest that you consult a physician, who will refer you to a specialist if necessary.

In conclusion, the sooner you deal with this condition, the easier it will be. Often only moderate lifestyle changes are enough to get back on track, but you can try also hormone replacement therapy or dietary supplements to boost your testosterone levels. That is why regular health check-ups are so important that you can deal with these problems early in the day.