Why is it necessary to talk about heavy metals? Because we have never been in contact with so many toxic substances as nowadays. These include heavy metals and other poisons, such as:

Toxins pose a lot of dangers. They poison the body directly, damage the brain, liver, central nervous system, and other vital areas. They weaken the immune system, making it vulnerable to illnesses.

And what’s worse, they feed cancer, viruses, bacteria and other intruders, which in turn contribute to disease development. It is precisely the toxins that may trigger today’s serious diseases such as cancer, Alzheimer’s disease, and other epidemics.

Most Encountered Heavy Metals, Their Sources, and The Diseases They Cause

Although many mercury-containing substances or devices are prohibited, they are still used.

Mercury is poisonous already in the tiniest amounts, which are impossible to see. Industries release mercury to water bodies. Mercury-containing drugs emerged in the 20th century.

From the point of view of toxicity, the form that mercury is present in is of crucial importance. Industries use inorganic mercury and often mercury residues are released into water bodies with wastewater. Microbes living in the mud at the bottom of water bodies turn inorganic mercury into considerably more harmful methylmercury.

Mercury damage is widespread. The most serious consequences are:

NB! Often, the initial cause of arthritis, fibromyalgia, chronic fatigue syndrome, and multiple sclerosis may be, in one way caused by an accumulation of excess mercury.

NB! Mercury does not exit the body unless you take special steps to remove it. We can make simple detoxification programs our daily routines to protect ourselves. Mercury leaves slowly, its half-life is about a year.

Although many other factors can cause these health problems, mercury poisoning should not be ruled out as one of the reasons. Alzheimer’s disease is said to be caused 100% by mercury.

Aluminum is not chemically considered a heavy metal because it has a lower density. However, due to its effect on the body, it is treated in the same category with heavy metals.

Aluminum, for example, is ingested from:

Aluminum mainly affects the central nervous system, the kidneys, and the digestive system. It also removes calcium from the bones and exacerbates calcium and phosphorus absorption. Aluminium has been associated a lot with cognitive problems and with illnesses that are more common in older people, such as Alzheimer’s disease and dementia.

Arsenic is commonly used in:

Arsenic mainly causes damage to the digestive and central nervous system, but is also harmful to the kidneys, liver, lungs, and bladder. It can cause sore throat, anorexia, fever, mucosal irritation, cardiac arrhythmias, numbness in the limbs, birth defects, and diabetes.

Cadmium is present in nature in ores with zinc, to a lesser extent with lead or copper.

It comes from the:

In the liver it produces a compound with proteins that moves into the kidneys and damages the filtration process that results in the body losing necessary proteins and nutrients.

Longer-term exposure to cadmium can lead to osteoporosis, since calcium in the bones will be replaced with cadmium. Already a small amount of cadmium increases the risk of osteoporosis. Severe cadmium poisoning may trigger the Itai-Itai disease (3).

Already a small amount of lead is very dangerous to humans. Since lead does not decompose in nature, it can persist for a long time when it is in contact with the ground. Lead is also harmful to biological systems. Lead accumulates in the upper layer of the soil and is immobile. If this continues to occur, the normal soil system will not be restored. Lead does not dissolve in water and causes severe damage to organisms.

Lead damages bones, brain, kidneys, thyroid, liver, and the central nervous system. Poisoning caused by chronic exposure to lead can start from mild mental changes and lead to death. What is important is how long and how quickly the person comes in contact with heavy metals and the age of the person.

Symptoms of acute poisoning include drowsiness, seizures, confusion, and increased intracranial pressure that leads to unconsciousness and death. Damage may also be permanent. If the lead content is over 3 μmol/l, it will damage the central nervous system. Lead can cause cancer in humans. Babies, pregnant women, and foetuses are the most susceptible to lead poisoning. Children absorb lead through the gastrointestinal tract. Consequences may include brain damage, behavioural, concentration or learning disabilities.

How Does The Body Excrete Toxins or Store Them in The Event of Overload?

Lymph absorbs and releases the contaminants present and stored in the body. Liver absorbs contaminants from the blood and decomposes them into simpler, safe products that are removed from the body with bile. Thyroid and adrenal glands also contribute to the cleansing process.

If the pollution builds up too much, the organism will no longer be able to remove all of it by itself, and it initiates protective mechanisms and begins to deposit them as dissolved salts, first in the walls of the intestines, in the skin, in the existing or forming fat layer, later in the liver, kidneys, reproductive organs, and lastly in the muscles, tendons, and bones.

Stones begin to form in the organs and cavities, the functioning of the blood circulation, the immune system and the body’s other systems becomes disturbed, recovery and self-healing processes stop proceeding normally, aging processes are accelerated, and spontaneous poisoning may occur.

For example, the contamination of the intestinal walls, which can often be measured in kilos, causes the manifestation of diseases such as tonsillitis, rhinitis, sinusitis, herpes, asthma, migraine, neurasthenia, furunculosis, rashes, not to mention intestinal infections, digestive disorders (constipation and diarrhea), and dysbacteriosis.

In addition to the heavy metals, poisoning may also be caused by:

How To Get Rid of Heavy Metals?

Removing heavy metals is difficult, but extremely important. It often takes a very long time to excrete them from the body efficiently and safely.

There are several foods and supplements that help to detoxify, for example:

To begin with, you should find a dentist specialising in the safe removal of amalgams. After that, it is good to consult with a holistic medicine specialist or nutrition therapist who understands the importance of proper nutrition, nutritional supplements, and cleansing of the digestive system and the liver/kidneys to effectively remove heavy metals from the body.

It is very important to consume pure water, to sweat (in a sauna or infrared sauna) and then to wash yourself thoroughly, and to eat healthy and clean food.

As the accumulation of heavy metals is a slow and unobtrusive process, it is more worthwhile to deal with prevention and continuous detoxification than to wait until more serious health problems arise. 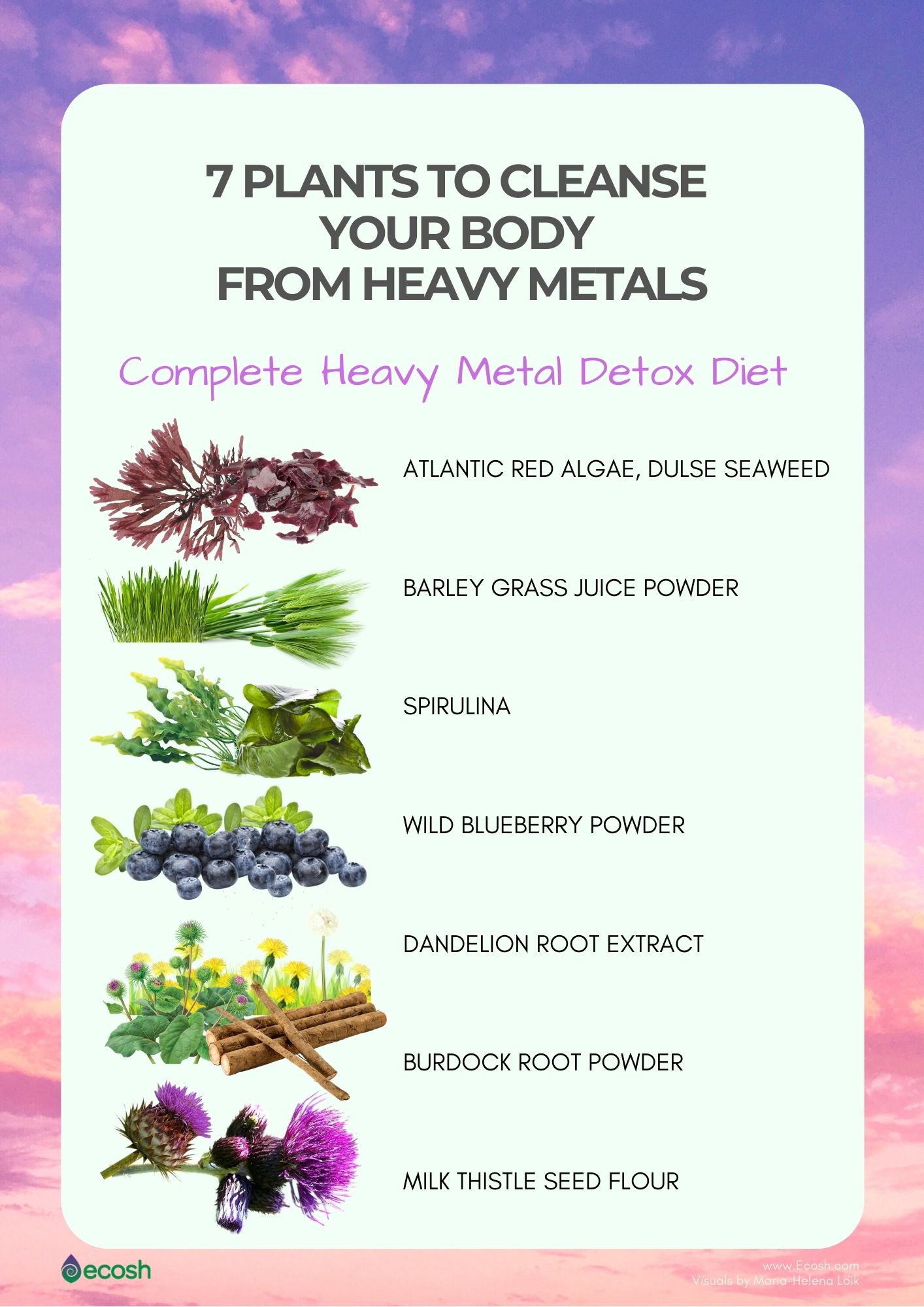 It is impossible to avoid everything harmful in this world, but there are things we can do for ourselves.

One of the best ways to detoxify from heavy metals is to consume the following 7 foods every day:

3. Forest blueberries: Pull heavy metals out of the brain. It also heals and improves all the voids from which heavy metals have been removed, which is particularly important for the brain. This is the most powerful food for the reversal of Alzheimer’s disease. Eat at least a cup a day.

4. Red dulse (Palmaria palmata): Binds mercury, lead, aluminum, copper, cadmium, and nickel, passes through the blood-brain barrier. Unlike other algae, it can remove mercury independently. It enters the depths of the body, hidden places, looking for mercury, binding it, and not releasing it before it leaves the body.

Eat two tablespoons of flakes daily, or the same amount of strips, if it is in the form of sheets.

5. Dandelion: This plant triggers blood circulation and helps your body to purify from toxic heavy metals, DDT, radiation and other toxins. Dandelion root detoxifies especially organs like the spleen, liver and brain.

6. Burdock root: Burdock root has the ability to purify toxins from the deepest places of the liver, soften dense and stagnant liver, remove toxic hormones from the liver that have been ingested from external sources such as metals, plastics, herbicides and fungicides.

7. Milk Thistle: Milk Thistle is a powerful plant that supports your liver during purification. In addition, it enhances liver resistance, strengthens bile formation and secretion, and has a good effect on the gastrointestinal tract. This plant effectively contributes liver regeneration and promotes liver innervation.

For optimal effects, it would be good to consume all five foods or supplements within 24 hours. You can also add coriander to your diet. It enters deep into hard-to-reach places, extracting heavy metals deposited a long time ago. Mix one cup into a smoothie or juice or add to salads.

If you can’t take it all, try to eat two or three a day. All these five powerful nutrients that remove heavy metals leave essential nutrients to the body to heal the damage caused by heavy metals and to restore the body. In addition, read more about Complete Heavy Metal Detox Diet and 7 Plants to Cleanse Your Body From Heavy Metals.

If you want even more success, add burdock root. Consume over a longer period. There’s almost nothing better you can do for your health than to remove heavy metals from your body. However, do not start to self medicate and first consult your doctor before starting any diets and self care practices.

Supporting Your Liver During The Detox

The liver is the largest of the digestive glands and the largest internal organ of the body with a weight of about 1.5 kg. The liver is the laboratory of the body, it transforms the harmful compounds into harmless ones and helps remove them from the body through excretory organs. Of all the organs involved in the removal of metabolic wastes, it is the liver that is responsible for making toxic substances unharmful. The liver is located in the right side of the abdomen, below the diaphragm.

A powerful support for the liver during detox is milk thistle.

Milk thistle and its benefits

Milk thistle is the “gift of Virgin Mary” according to folklore. This plant (Silybum marianum) is from the Mediterranean. Its height can reach up to 150 centimetres. Many people consider milk thistle to be the most effective medicinal plant. Milk thistle has no known contraindications or side effects.

NB! The seeds and herbs of milk thistle can reduce the effectiveness of oral contraceptives and tamoxifen. However, do not start to self medicate and first consult your doctor before starting any self care practices.

AUTOIMMUNE DISEASES – Causes, Risk Factors, and The List of 18 Most Common Autoimmune Diseases