Ashwagandha is the crown jewel of the herbs of Ayurveda, a traditional Indian healing system. This medicinal herb has been known for centuries, but it is only now getting its worldwide reputation due to the explosive effects of recent medical and pharmacological studies. Ashwagandha promotes the balance in the body by bringing the body back to its original shape.  Also, this plant helps to treat hyporthyroidism, hyperthyroidism and other hormonal imbalances.

Ashwagandha is classified as an adaptogenic plant that enhances your body’s ability to regulate the key systems of itself. Especially the neurological, immune, reproductive, endocrine, and energy systems.

Adaptogens are natural regulators of the metabolism and hormone system that increase your ability to adapt to a stressful conditions and environmental factors. At the same time they reduce the damage of your body caused by these factors. Unlike other adaptogenic plants, Ashwagandha has a soothing and relaxing effect.

Why is KSM-66 Ashwagandha Root Extract The Best Option?

This unique full spectrum KSM-66 Ashwagandha root extract is an supplement that maintains the balance of the several ingredients as it is in the original herbal mixture, without one component prevailing. It is believed that the effectiveness of ashwagandha is a result of a complex blend of various components, mainly alkaloids (like cuseohygrine, anahygrine, isopelletierine, anaferine, tropine, etc.),  saponins and steroid lactones called withanolides. All these components must be present in their natural proportions. Therefore it`s important that the extract is in full spectrum.

KSM-66 Ashwagandha Root Extract is ranked as the highest percentage (> 5% by HPLC) of withanolides presently available in the market. All those withanolides are obtained directly from the root of the plant.

Scientists claim that Ashwagandha increases energy production in the muscles by having a beneficial effect on cellular mitochondrial activity. thereby reducing the activity of the enzyme responsible for the degradation of adenosine triphosphate (ATP) as the cellular molecular unit.

It has been noted that Ashwagandha also raises creatine levels, resulting in even more ATP activity, producing fast energy without a sudden drop.

In addition, Ashwagandha’s root extract supports the nervous system and adrenal glands. It helps to maintain energy levels during stressful times and prevents your body from burnout. The product is suitable for both amateurs and professional athletes and for people who are struggling with their health. 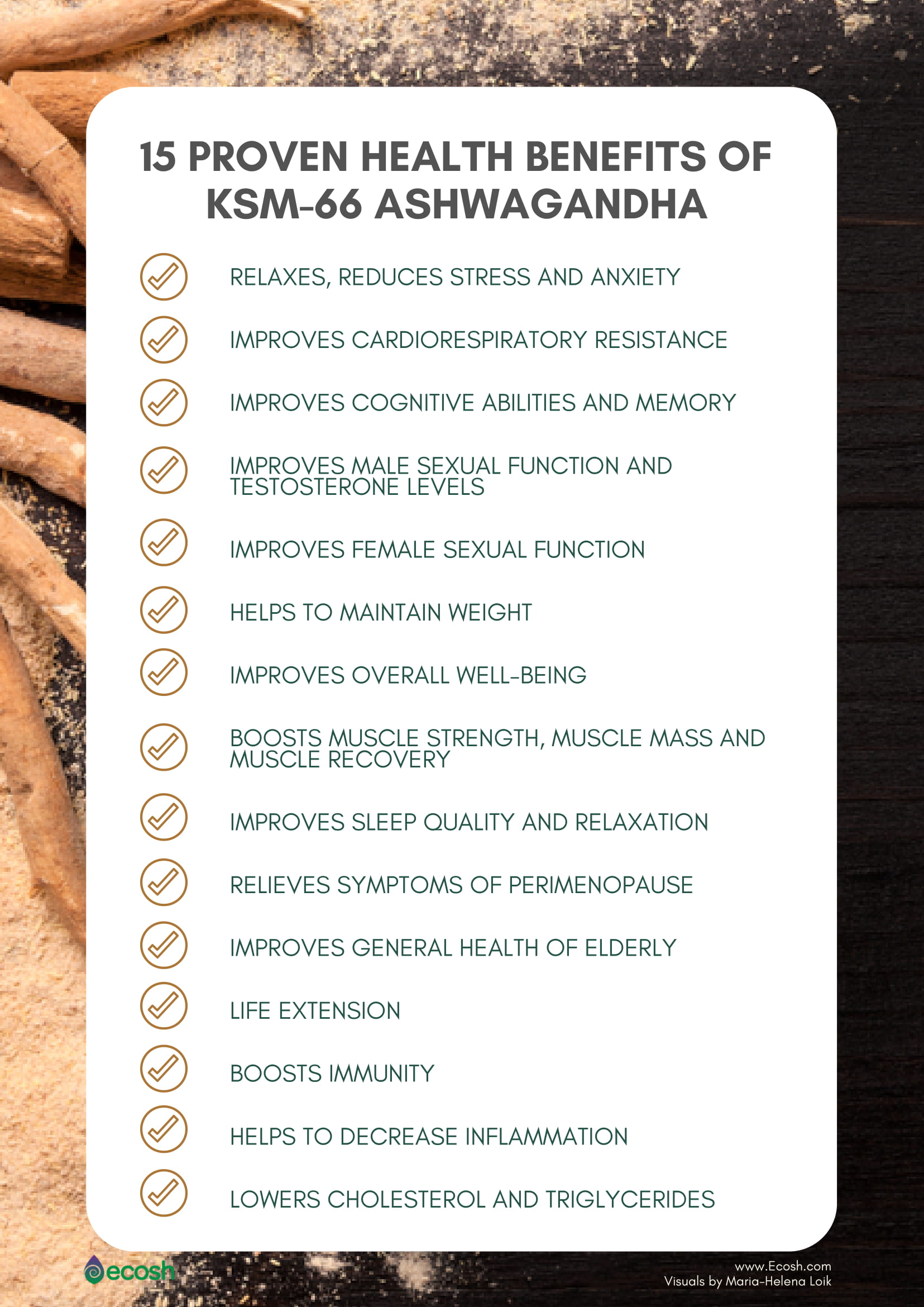 Researches focused on the main usage possibilities and benefits of KSM-66 Ashwagandha, which include:

The study showed that KSM-66 achieved a very significant reduction of stress, anxiety, depression and a decrease in serum cortisol levels (27.9% decrease).

In one study athletes, who consumed KSM-66, showed a significant improvement in cardiorespiratory resistance (VO2max). According to the World Health Organization quality of life questionnaire, they had also results of improved self-esteem.

A study with over 50 participants demonstrated a statistically significant enhancement on the Wechsl memory scale and in terms of and attention and action when using KSM-66.

The study showed an improvement in the female sexual indicators (libido, excitement, lube, satisfaction and orgasm).

The participants who took KSM-66 had decreased BMI, stress scores and cortisol levels. Also, they had an improved score on Oxford’s happiness score.

In other study, participants who consumed KSM-66 had improved sleep experience. The assessment was based on physiological indicators such as sleep onset latency and sleep efficiency. Also psychometric indicators such as the Pittsburgh Sleep Quality Index and Hamilton’s Anxiety Scale.

As it is widely documented, aging causes a dramatic decline in psychological and physiological well-being. An elderly adult study showed that consuming of KSM-66 resulted in a significant improvement in cognitive function, sleep quality, physical form, and psychosocial well-being.

An animal study demonstrated that the KSM-66 prolonged life as much as by 21%. The study used roundworms (Caenorhabditis Elegans) because their metabolic processes are similar to humans.

Animal studies have shown that ashwagandha significantly decreases blood fats. One study in rats found that it lowered total cholesterol by as much as 53% and triglycerides by close to 45%.

Several animal studies have found that ashwagandha helps to decrease inflammation. Studies in humans have shown that it increases the activity of natural killer cells, which are immune cells that fight infection and help you stay healthy.

NOTE! Do not use Ashwagandha with antidepressants, insulin or thyroid medicines.

Let us know if you liked the post. That’s the only way we can improve.
Tags: Ashwagandha, Ashwagandha root, Boost immune System, Boost sexuality, Boost testosterone, Fight stress, How to boost muscle strength, How to extend life, How to fight depression, How to get good night sleep, How to lower your bad cholesterol, how to relieve anxiety, How to relieve stress, Improve cognitive abilities, Improve memory, KSM-66, Relaxation