Epstein-Barr virus (EBV), also known as human herpesvirus 4, is a member of the herpes virus family. It is one of the most common human viruses found all over the world, and it has caused a secret epidemic.

Of the approximately 320 million people in the United States, more than 225 million are infected with some form of EBV.

Most people get infected with EBV at some point in their lives, as it spreads very easily through bodily fluids, primarily saliva. EBV can cause infectious mononucleosis, also called mono, and other illnesses.

EBV has evolved over the decades and each new generation of viruses has become more dangerous than before.

EBV Transmission – How You Get Epstein-Barr Virus?

There are many ways to get EBV. For example:

The virus is not always infectious, and is most likely to spread in its second stage. There are actually over 60 strains and mutations and each can create different symptoms and conditions as they move through the four stages of invasion in the body.

For more information on the health problems EBV causes and how you can heal, please read Thyroid Healing. 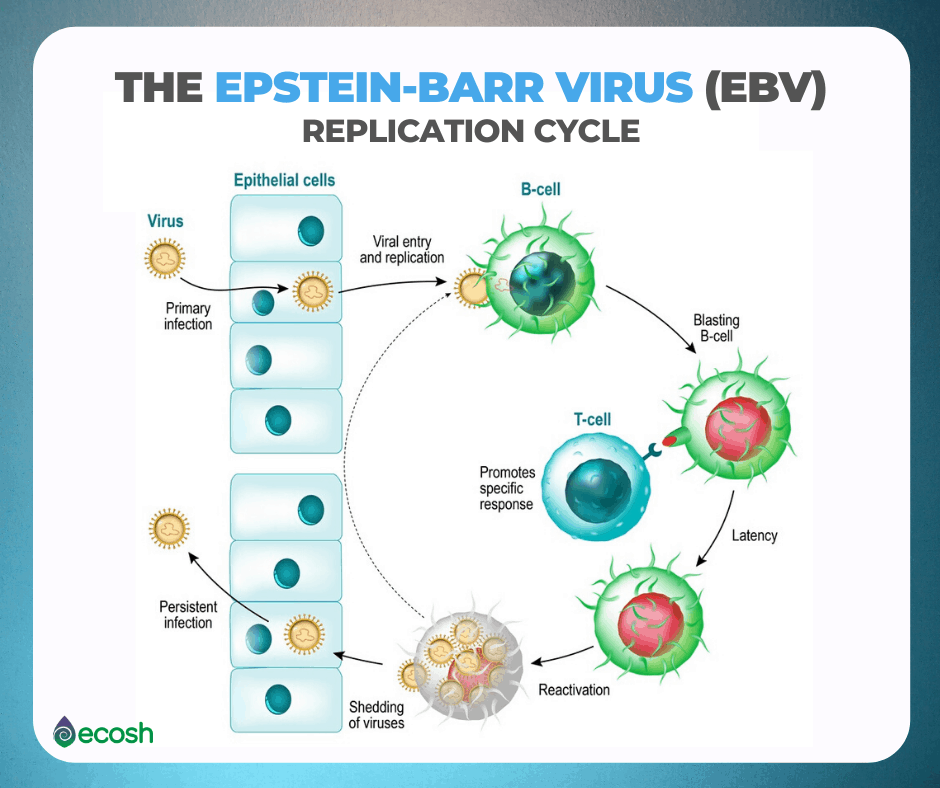 The First Stage of The Epstein-Barr Virus

When you get infected with EBV, it goes through a latent (inactive) period. It floats in your bloodstream, doing almost nothing more than copying itself to increase the numbers and waiting to start a real infection.

The virus can wait it’s time for weeks, but even years. Finally, in your weak moment, the virus detects your stress hormones and takes advantage of that moment.

Epstein-Barr virus is in latent state and waits you to have weak moments, for example:

In case of puberty, pregnancy, or menopause, EBV does not take advantage of your weakness and stress hormones, but the fact that hormones are its powerful food source, and their abundance acts as a trigger for it. In the first stage, the virus is particularly vulnerable.

However, EBV is not detectable at this stage and does not cause any symptoms, so you usually do not know how to fight it because you have no idea about its existence. 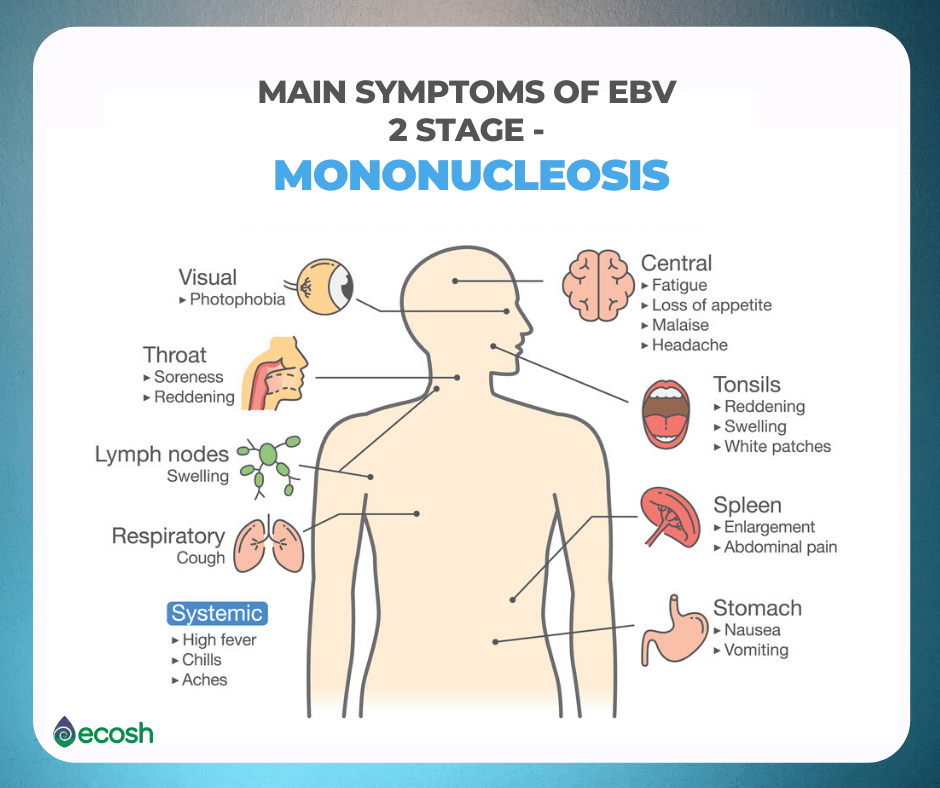 The Second Stage of The Epstein-Barr Virus

At the end of the first stage, EBV is ready to fight your body, and to announce his existence by causing mononucleosis. It’s that famous mono we hear about growing up as “the kissing disease”.

It is a disease that affects thousands of students every year who exhaust themselves by partying or studying through the night.

However, mononucleosis is the second stage of EBV. This is the period when the virus is most contagious. Avoid contact with someone else’s blood, saliva or other body fluids if they are mono, or if you have mono.

In the second stage, your immune system goes to war against the virus. How fiercely this battle takes place varies from person to person and also depends on which variant or strain of EBV it is.

– You may have mononucleosis for a week or two with moderately rough throat and tiredness, in which case you are unlikely to understand what is going on.

– However, you may also experience symptoms that lasts for several months like for an example:

At this stage, EBV is looking for a permanent home, hiding in one or more of your most important organs – typically the liver and/or spleen.

EBV likes to be in these organs because they can accumulate mercury, dioxins and other toxins. The virus thrives on these toxins.

The Third Stage of the Epstein-Barr Virus

If you have not already taken the steps to destroy EBV, the virus is actually still alive, causing new symptoms and will not be available for testing.

This is because once the virus has established itself in the liver, spleen and/or in other organs, it stays there and no study has yet been found to identify it. If the virus is undetectable in your organs, your body will conclude that it has won the battle and the invader has been destroyed.

The mononucleosis will go away and the immune system will return to its normal state. However, unfortunately, the Epsten-Barr virus has just begun its journey through your body.

For example, the virus can dig deep into the liver and spleen, causing inflammation and enlargement of these organs. And again, keep in mind that your doctor may not associate “already passed” EBV infection with its current activity in the organs.

The Fourth Stage of The Epstein-Barr Virus

The ultimate goal of Epstein-Barr virus is to leave the thyroid gland and cause inflammation in the central nervous system. This is usually not allowed to happen by the immune system.

But EBV has successfully exhausted your thyroid when you enter the third stage, and if you are suddenly hit by some physical or severe emotional damage, the virus exploits your vulnerability and begins to cause a range of strange symptoms ranging from palpitations to general aches and nerve pain.

The usual scenario is an accident, surgery or other physical injury, after which you will feel very unwell for much longer than you might expect from the injury.

Blood tests, X-rays and MRI do not detect anything, so doctors are not aware of this viral neuritis. The fourth stage of the Epstein-Barr virus is therefore the main source of mysterious diseases – a problem that confuses doctors big time.

In fact, what happens is that the damaged nerves release a “disorder hormone” to signal to the body that the nerves are vulnerable and need to be repaired. In the fourth stage, EBV detects this hormone and rushes to the damaged nerves.

When a nerve is damaged, the nerve roots fall out of the nerve shell. EBV seeks these openings and grabs them. If successful, it can keep the area inflamed for years. As a result, relatively little damage can worsen and cause constant pain. 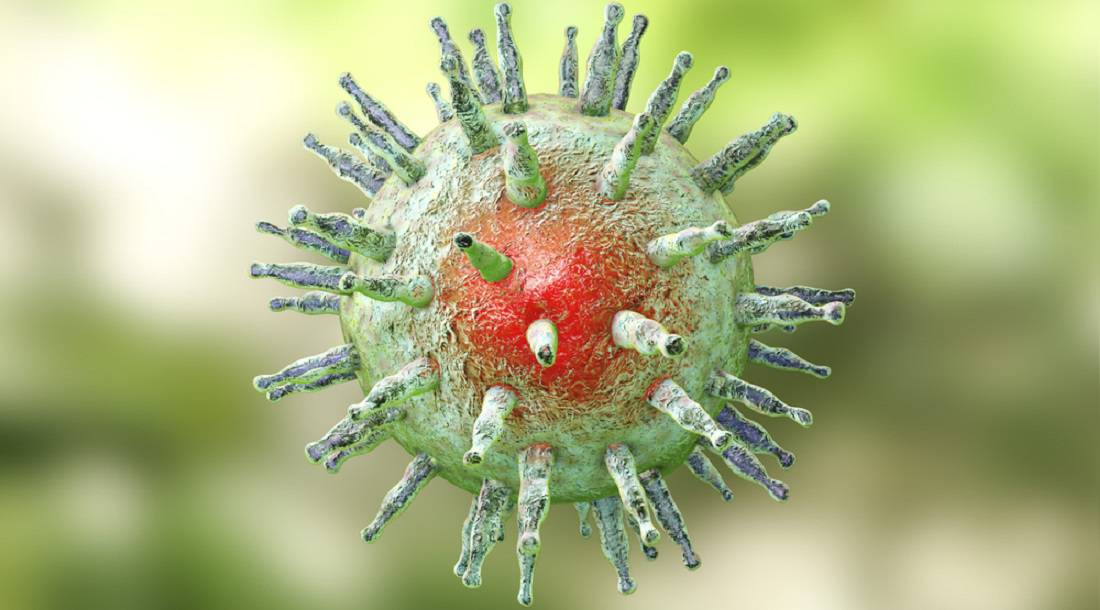 Symptoms of Epstein-Barr virus fourth stage – a viral inflammation may include: 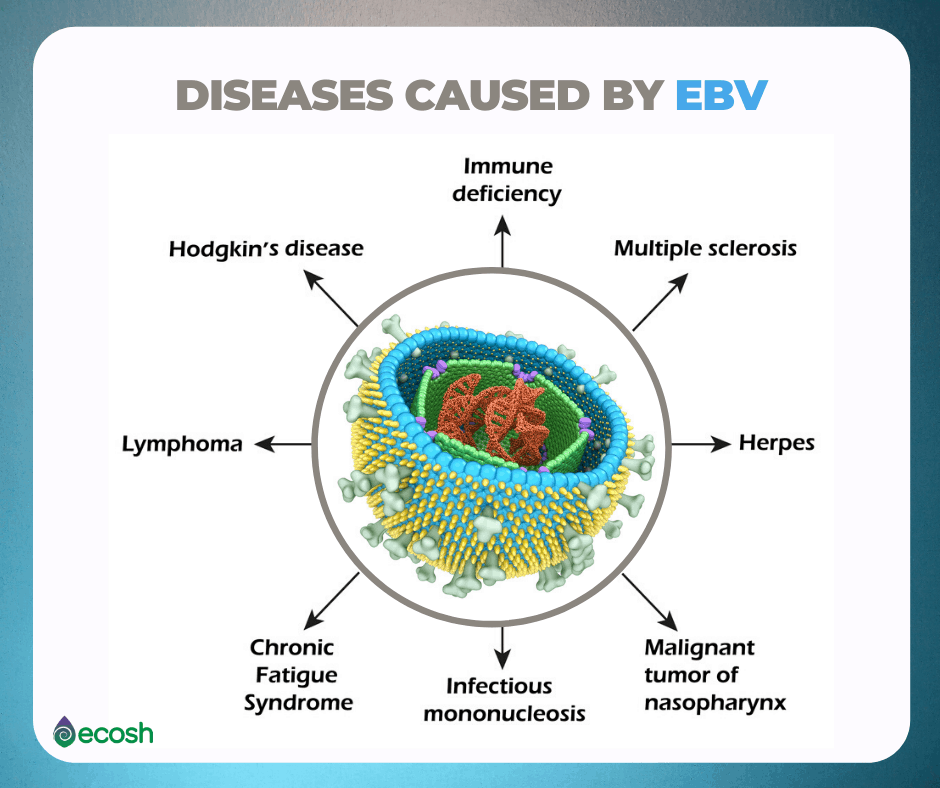 Health Problems, Toxifications and Diseases Caused by Aggressive EBV Nesting in Your Organs

EBV is best known for causing mononucleosis, but less often it can lead to other diseases, including:

NB! While the above may sound discouraging, don’t let yourself be depressed. The thyroid gland has the ability to recover and heal itself when given what it needs. And never underestimate the power of your immune system, which  can be simply activated by knowing the truth.

As a counterattack, the immune system tries to surround the virus with a wall of calcium, creating nodules in the thyroid gland. However, this does not make a big harm for EBV. Firstly, most virus particles evade this attack and remain free.

Secondly, the virus particle that the immune system successfully surrounds with the wall usually survives and makes its calcium prison to a comfortable home, feeding on the thyroid gland and depleting its energy.

The virus particle can even turn this prison into a cyst that puts pressure on the thyroid gland.

As EBV is hard to detect, it is usually misdiagnosed as:

In such cases, patients are prescribed inappropriate treatment that is not directed against the real culprit – because these mysterious diseases are, in fact, the fourth stage of the Epstein-Barr virus. 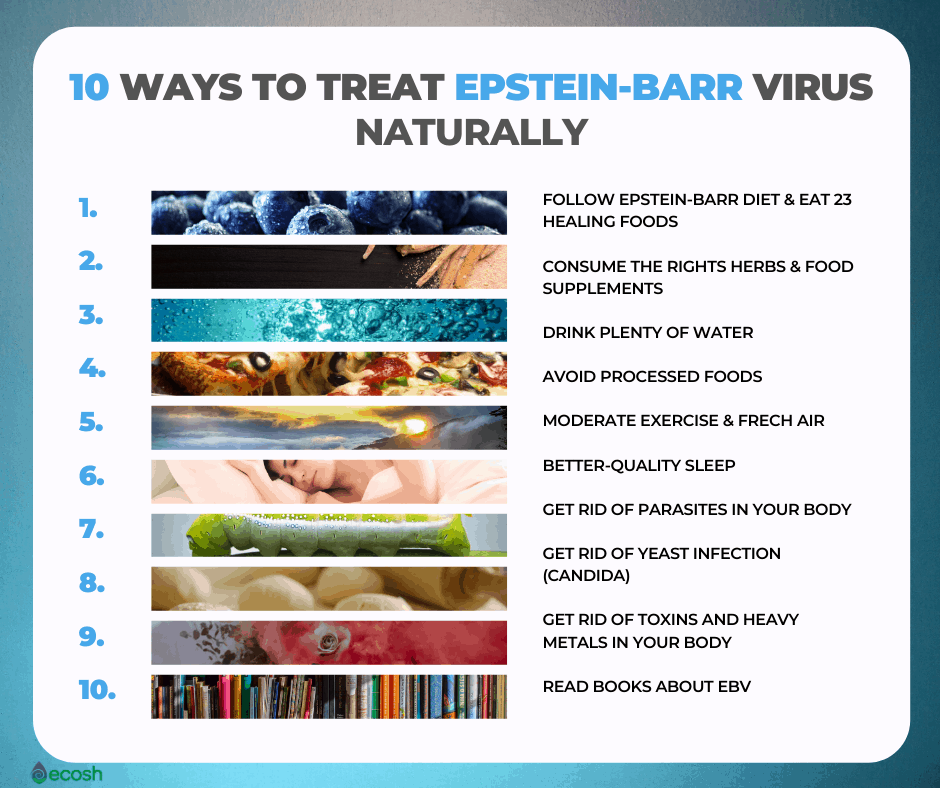 Healing From The Epstein-Barr Virus

The first step of the healing process is to know the cause of your suffering is Epstein-Barr. From this alone, your immune system will strengthen and the virus will naturally weaken.

Another good news is that if you carefully and patiently follow the steps detailed in Part IV of the book Medical Medium: Secrets Behind Chronic and Mystery Illness and How to Finally Heal, you can heal.

Even more, you are already on the path of healing by reading this article, as it is the first step. Because when it comes to fighting EBV, in a very real sense, knowledge is power.

You can free yourself of EBV, recover your immune system, rejuvenate your body, gain full control over your health, and move on with your life.

In short, instead of just treating symptoms, your goal is to:

How long the process takes varies for each individual and depends on myriad factors. Some people conquer the virus in as little as three months.

However, a more typical period is a full year. And there are some people who need 18 months or more to destroy EBV.

Acute cases of EBV are treated in much the same way as a cold or flu virus. Up to 80 percent of your diet should come from fresh fruits and vegetables.

However, certain fruits and vegetables can help your body rid itself of EBV and heal from its effects. The following 24 foods (mostly based on the book Thyroid Healing,but based on a personal experience we added few into this healing recipe) are the best ones to incorporate into your diet. Include them daily or as often as possible, so that you get all of these foods into your system.

For more information on the health problems EBV causes and how you can heal, please read Thyroid Healing.

The following selection of herbs and food supplements can further strengthen your immune system and aid your body in healing from the virus’s effects.

Read more about healing herbs and food supplements to treat Epstein-Barr virus from the book Medical Medium: Secrets Behind Chronic and Mystery Illness and How to Finally Heal.

Processed foods require a lot of attention from your system to process. They ruin your gut bacteria, cause dysbiosis, bog down your liver, and don’t nourish your body. Consume as few processed foods as possible.

Movement is important not just for your physical health, but even more for your mental health. Even if it’s just a 15 minute walk.

As good night sleep is vital for your strong immune system, be sure you`ll get enough rest.

7. Get rid of parasites in your body

Excess parasites in your gut can cause absorption issues meaning your body isn’t getting the nutrients from the food you eat. A lot of immune issues like Epstein-Barr stem from digestive tract issues.

8. Get rid of yeast infection – Candida

Candida breeds on sugar, so cutting down on sugars helps to eliminate candida from the blood and digestive system. Excess candida can cause leaky gut syndrome which causes brain fog and also weakened immune system.

The cleaner the body during the time of healing the better so that the immune system can stay strong and do it’s job to heal Epstein-Barr Virus.

The best way to get rid of candida is to consume quality probiotics and boost your immune system. Read about how to treat yeast infection (candida) naturally here: Vaginal Yeast Infection in Women – Causes, Symptoms and Treatment.

9. Get rid of toxins and heavy metals in your body

Stress, toxins and heavy metals are EBV favourite foods. Even more, they prevent your immune system to focus to its task. Read more about the natural detox options here: Complete Heavy Metal Detox Diet – 7 Plants to Cleanse Your Body From Heavy Metals.

To know more about this topic and the treatment of Epstein-Barr virus, please read following books:

Source: This article is written mostly based on the New York Times bestselling book Medical Medium: Secrets Behind Chronic and Mystery Illness and How to Finally Heal