Coenzyme Q10 (also known as CoQ10 and ubiquinone) is a compound (yellow to orange crystalline powder) that your body produces naturally and stores it in the mitochondria (the mitochondria are in charge of producing energy) of your cells.

CoQ10 plays a key role in your health as it acts as an antioxidant, which protects your cells from damage caused by free radicals and plays a vital role in the metabolism. Thus, maintaining normal CoQ10 levels is extremely important. Luckily, you can also obtain CoQ10 from certain foods or supplements.

Plenty of research has shown CoQ10’s broad-spectrum of health benefits. While at the other hand, low levels of CoQ10 have been associated with numerous health conditions such as for example diabetes, brain disorders, heart disease, and even cancer. Although, it’s not yet totally clear whether low levels of CoQ10 cause these diseases or are a result of them. 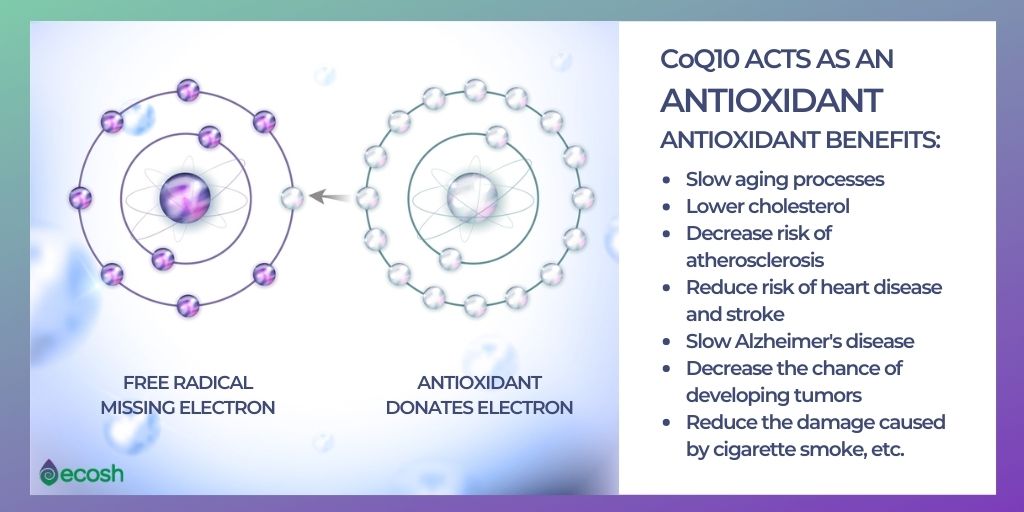 What is Coenzyme Q10 (CoQ10) and Its Main Roles in Your Body?

Vitamin coenzyme Q10 or Ubiquinone is an enzyme that is actually naturally present in your body and is involved in the process of producing cellular energy (helping to convert food into energy) and protecting mitochondria (a cellular power plant that produces 95% of the energy needed by the human body) from oxidation throughout your life. How?

Namely, CoQ10 plays a key role in the body and acts as an antioxidant in protecting your cells from free radicals. Free radicals damage cell membranes (the cell’s first layer), alter DNA, and may even cause cell death.

Thus, it is believed that free radicals are one of the biggest culprits in causing fast aging and a number of health problems such as heart disease or cancer. Antioxidants can neutralize these free radicals and thereby reduce or even prevent some of the damage they cause.

Other important antioxidants that accelerate the recovery and healing of damaged cells and tissues include vitamins C, A, E, carotenoids, flavonoids, selenium, manganese and zinc.

Due to its antioxidant activity and therapeutic effect, CoQ10 has been studied as a potential treatment for numerous health conditions and diseases described below.

Both forms of coenzyme Q10 exist in nature – in the human body, as well as in food. However, most of the coenzyme Q10 we get from food is ubiquinone. In the intestinal wall and liver, ubiquinone will be converted to ubiquinol, which is the active form of coenzyme Q10.

Until recent years, the biggest challenge for dietary supplement manufacturers was to find a technology that would encapsulate the active Q10 while also maintaining its active form. Because ubiquinol is chemically extremely unstable, it returns to the oxidized form as soon as it is exposed to oxygen.

In your body, CoQ10 is synthesized in the liver when the liver is healthy and there are enough B vitamins. Your liver is able to synthesize Q10 the most between the ages of 19-25. This ability will decrease when you get older.

Inhibited or reduced Q10 synthesis leads to decreased energy production. Muscles get tired faster, heart performance decreases, the efficiency of nerve cells and the production of antibodies by the immune system reduces. This results in fatigue and weakness.

Q10 is mainly stored in your liver and kidneys, but the levels of coenzyme Q10 are highest in myocardium (as myocardial (the muscular tissue of the heart) energy requirements are enormous), doubling the amount of Q10 in levels in liver and kidney.

The two significant aspects that can lead to CoQ10 deficiency are reduced biosynthesis, and escalated use of CoQ10 by the body. Biosynthesis is the major source of CoQ10, and it requires at least 12 genes. But mutations in many of them can cause CoQ10 deficiency.

However, other genetic defects that are not directly related to the CoQ10 biosynthetic process may also affect CoQ10 levels. These include genetic defects such as for example mutations of mitochondrial DNA, ETFDH, APTX, FXN, and BRAF (4).

There are many factors that can prevent CoQ10 formation and absorption, such as: 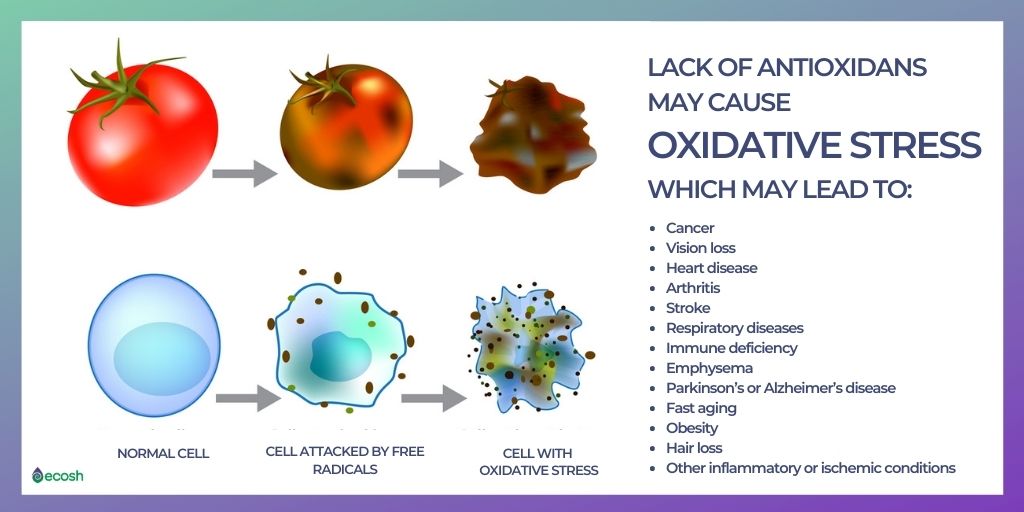 What is Primary CoQ10 Deficiency and What May Happen When You Don’t Get Enough CoQ10?

Primary CoQ10 deficiency is a rare, clinically heterogeneous autosomal recessive disorder, that involves shortage (deficiency) of coenzyme Q10, and can influence numerous parts of the body, mainly the brain, kidneys and muscles.

This disorder is caused by mutation in any of the genes encoding proteins directly involved in the synthesis of coenzyme Q10, and is unique among mitochondrial disorders as early supplementation with CoQ10 can prevent the onset of renal  and neurological manifestations. The signs and symptoms, severity and age of onset of primary coenzyme Q10 deficiency may vary widely.

In the most serious cases, the disorder emerges in infancy and leads to problems that can be life-threatening. These health issues include:

The modest cases of primary CoQ10 deficiency can start as late as a person’s sixties and may often cause neurological and other problems that gradually get worse unless treated with coenzyme Q10 supplementation. These health problems include:

23 Possible Health Benefits of Coenzyme Q10 (CoQ10) Based on Science – Why Do People Take CoQ10?

Generally, most healthy people should have enough CoQ10 naturally. However, some evidence suggests that adding more (in the form of CoQ10 supplements) may be beneficial. This is because some medical conditions (such as many neurodegenerative disorders, cancer, diabetes, and cardiovascular and muscular diseases) as well as older age may lead to decreased levels of CoQ10.

Luckily, the treatment with CoQ10 does not cause serious adverse outcomes in humans and new formulations increase CoQ10 absorption and tissue distribution.

Although some of the research has not found any conclusive benefits, taking CoQ10 orally may provide many significant health benefits and has been frequently used as an antioxidant strategy in many different diseases listed below.

2. Coenzyme Q10 For Heart Failure and Other Heart Conditions

It seems that when combined with regular medications CoQ10 may also lessen future cardiac risks, help treat heart failure and other heart conditions by lessening oxidative damage, improving heart function, and increasing ATP production. However, the evidence is conflicting (1, 3, 8).

3. Coenzyme Q10 For Fertility Problems Such as Low Sperm Count in Men and The Number of Eggs in Women

According to studies, the antioxidant properties of CoQ10 may help better sperm quality and lessen the decrease in age-related decline in quality and number of eggs in women (3, 6, 9).

Taking CoQ10 supplements is linked to reduced the risk of developing pre-eclampsia (a pregnancy complication described by high blood pressure and signs of damage to another organ system, most frequently the liver and kidneys) in women at risk. Even more, fetal wasting with subsequent spontaneous abortion has also been associated with low levels of CoQ10 (3).

Periodontal disease is an inflammatory disease process which is mainly the result of a bacterial attack and inflammation of the gums and the bone that surround the teeth. Fortunately, coenzyme Q10 serves as an endogenous antioxidant which raises the concentration of CoQ10 in the diseased gingiva and efficiently suppresses advanced periodontal inflammation (3).

According to studies, CoQ10 may improve insulin sensitivity and adjusts type 2 diabetic disorder (3, 13).

Environmental factors, such as UV rays can lead to reduced protection from harmful external aggressors, lessened skin moisture, and the thinning of the layers of the skin. However, applying CoQ10 directly to the skin may lessen the damage caused by external factors such as sun damage, and increase energy production in skin cells as well as promote antioxidant protection.

Individuals with low levels of CoQ10 seem to have a higher risk of developing skin cancer (6, 10).

According to studies, people with cancer have decreased levels of CoQ10. Therefore, low levels of CoQ10 have been linked with higher risk of cancer (14, 15, 16, 17).

Even more, according to some preliminary studies, as CoQ10 may reduce these harmful compounds leading to oxidative damage, and to brain diseases, it may also slow down (but not stop) the progression of Alzheimer’s disease and Parkinson’s disease. However, more research is needed to confirm this effect (1, 6, 18, 19, 20).

14. Coenzyme Q10 For The Adverse Effects, Such as Liver Problems and Muscle Pains of Taking Statin-type Cholesterol Drugs

CoQ10 has been shown to be necessary if your doctor has prescribed cholesterol-lowering statins (such as atorvastatin, cerivastatin, lovastatin, pravastatin, simvastatin), because these medicines do not allow the liver to synthesize Q10. Statins reduce the liver’s ability to synthesize Q10 by about 40% over the years and cannot be compensated for by eating CoQ10 rich foods.

According to some preliminary evidence, CoQ10 may also help to prevent or treat the adverse effects, such as liver problems and muscle pains, of taking statin-type cholesterol drugs. Though, more research is needed. Note that externally added Q10 does not reduce the body’s own Q10 production in any way (1, 3).

Taking CoQ10 seems to help in the prevention and treatment of migraines, because it boosts mitochondrial function and lessens inflammation. However, it may take several months until it works (3, 11).

Also lungs are extremely susceptible to oxidative damage. Therefore, the lack of antioxidant protection, including low levels of CoQ10 and increased oxidative damage in the lungs, may lead to lung diseases such as asthma and chronic obstructive pulmonary disease (COPD). In people with asthma, supplementing with CoQ10, may reduce inflammation, as well as the need for steroid medications to treat it (6, 21, 22, 23, 24).

People with mitochondrial myopathy have often reduced levels of CoQ10 in their muscle tissue. Therefore, CoQ10 is extremely widely used for the treatment of primary mitochondrial disorders. However, the clinical evidence is limited due to the relative rarity and heterogeneity of mitochondrial diseases (3).

Evidence demonstrates that supplementing CoQ10 at a dose of 150 mg/day can lessen oxidative stress, increase antioxidant enzyme activity and decrease the inflammatory marker in people with atherosclerosis. It may also possess a direct anti-atherogenic effect (3).

Evidence indicates that oxidative damage, mitochondrial respiratory chain dysfunction and iron accumulation play a significant role in Friedreich’s ataxia. However, according to a long lasting open-label pilot trial, which lasted 47 months – a sustained improvement in mitochondrial energy synthesis was observed that was associated with a decline of disease progression and improved cardiac function. Sadly, in shorter studies the results were less satisfactory (3).

Decreased coenzyme Q10 amounts due to aging may be one of the main factors in the development of chronic health disorders in old people. Even more, in addition to being an antioxidant, CoQ10 is also involved in cellular processes. Therefore, proper uptake of CoQ10 into cells is critical for the improvement of cell activity during aging. Maintaining CoQ10 functional levels at cell membranes either by improving endogenous synthesis or by dietary supplementation can be a key strategy to boost health during aging (3).

When Could You Start Taking Coenzyme Q10? 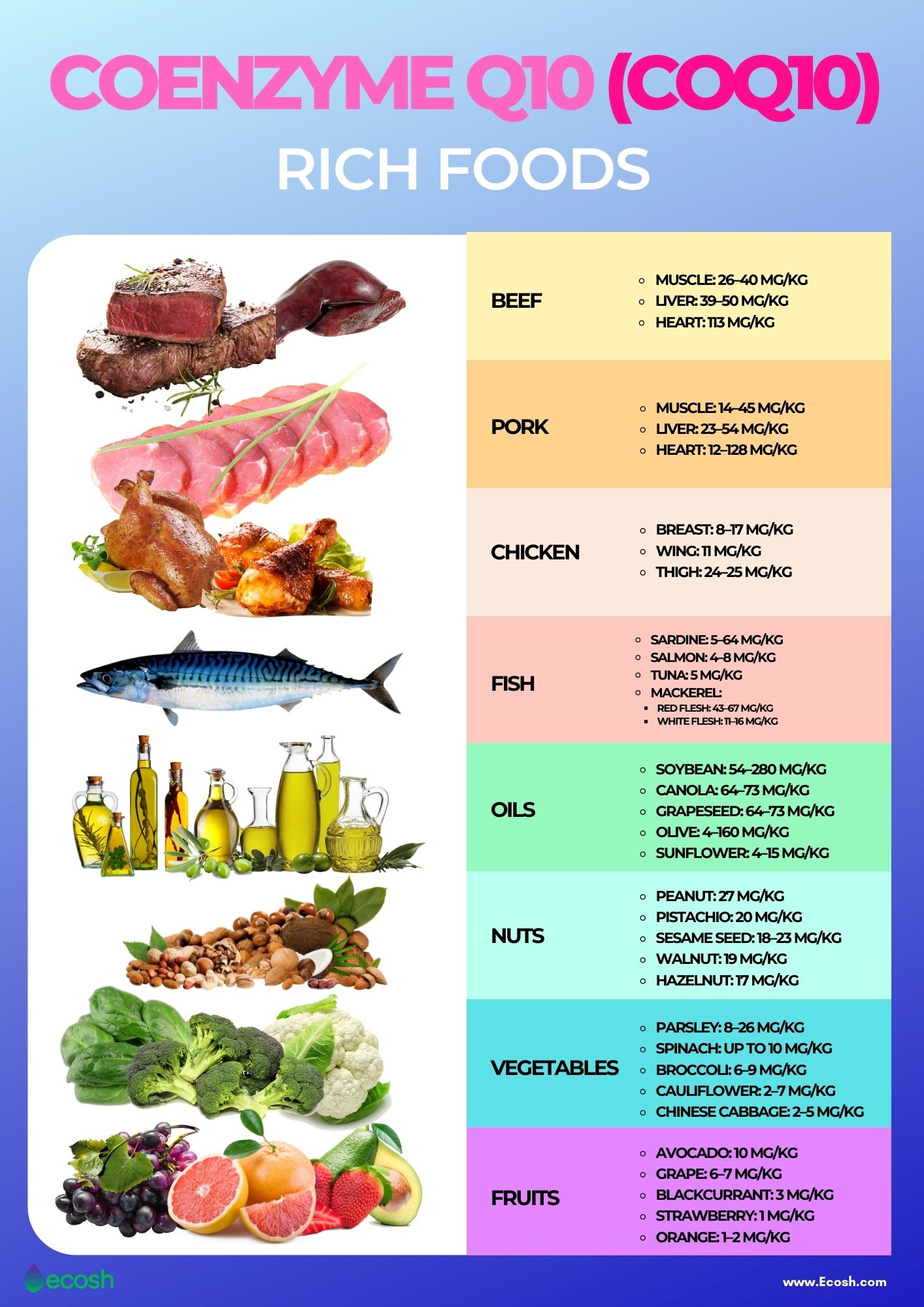 Foods Rich in CoQ10 – Can You Get CoQ10 Naturally From Foods?

CoQ10 amounts found naturally in certain foods is much lower than that found in dietary supplements. Meat, poultry and vegetable oils are the richest sources of dietaryCoQ10. While vegetables, and fruits contain very modest amounts of CoQ10, except avocados, which have quite high CoQ10 content.

CoQ10 Recommended Dosages – How Much CoQ10 Enzyme Should You Take?

Starting from the age of 25, Q10 synthesis in your body begins to decrease. At the age of 60, your body produces only 40% of the amount your body actually needs. However, if the daily amount of Q10 drops to 25%, pathological processes, such as disorders of the heart, liver and lungs, may begin to develop.

However, these side effects usually disappear within a week after stopping the excess intake (1, 4).