Red Reishi mushroom (Ganoderma lucidum), also known as Lingzi, the “Mushroom of Immortality”, “10,000 Years Sponge”, “Queen of Plants”, “Immortal Sponge”, and “Life Elixir” has been known in China, Japan, and other Asian countries for its miraculous health-enhancing and longevity promoting effects for a thousands of years.

Due to its variety of potential health benefits and rich composition Reishi has been used in Eastern medicine to boost the immune system, fight cancer, enhance many body functions, calm the mind, relieve cough and asthma, reduce insomnia, lessen fatigue, improve the work of vital organs, as well as to strengthen and heal overall health.

Although Reishi mushrooms themselves can be consumed raw, it is also custom to use supplements, extracts or powdered forms of the mushroom that contain these particular healing molecules.

In nature there are 6 types of Reishi, but Red Reishi Mushroom (Ganoderma lucidum), is the most studied one and possesses the strongest medicinal effects.

It is a dark, large mushroom with a woody texture and a glossy surface that grows on decaying hardwood trees in different hot and humid locations in Asia. Because this extremely beautiful mushroom is relatively rare in the wild, Japanese scientists discovered a method for cultivating Rer Reishi mushroom. Thereby, today, the Reishi mushroom is widely available and the main growing and production locations are Japan, China, the USA and several other Asian countries.

In this article, we will discuss about all the nutrients contained in this mushroom, the health risks, and the 13 scientifically studied health benefits of the Reishi mushroom. Some of these health benefits are backed by stronger scientific evidence, while support for the others is less conclusive (7, 12, 25). 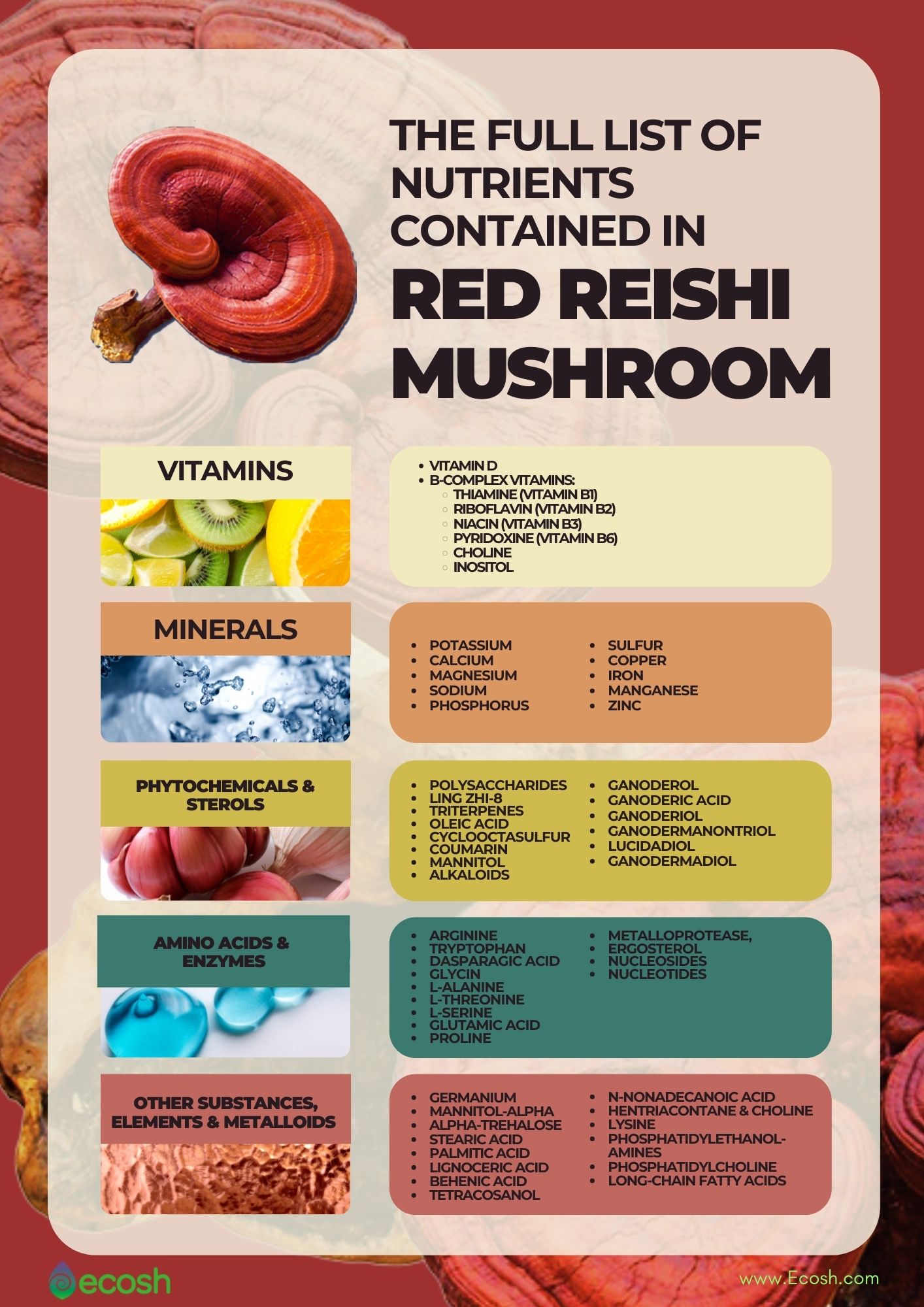 The fruiting bodies of the Reishi mushroom are a magnificent source of nutritionally important minerals, vitamins (mainly B-complex vitamins and vitamin D), antioxidants, amino acids, macronutrients, as well as protein (despite not being animal-based). Although B-complex vitamins are commonly found in meat, mushrooms, due to being from the fungi rather than plant kingdom, are one of the few sources of quality B vitamins that can be found in vegetarian diets.

Reishi in particular, similarly to the oyster mushroom, is a complete source of the primary B complex vitamins such as thiamine, riboflavin, folic acid and niacin.

Therefore, due to its high protein and B-complex vitamins content, Reishi might be a great meat substitute for vegans looking to increase the amount of B vitamins and proteins in their diet naturally. Among edible mushrooms, Reishi is also an exceptionally superb source of potassium.

Despite the high mineral and vitamin content – the wide spectrum of prophylactic and therapeutic effects of Reishi mushroom is mainly due to the high content of polysaccharides, triterpenoids and germanium. It’s because Reishi contains an enormous collection of bioactive polysaccharides, beta-glucans and more than 120 different triterpenoid compounds.

For example, polysaccharides found in the Reishi mushroom affect your blood by increasing the number of white blood cells, which in turn increases your immune system’s ability to fight diseases.

Although you can eat this mushroom raw, due to its rubbery, cork-like texture, many prefer to consume it in powdered or supplement form.

The List of The Vitamins, Minerals, Amino Acids, and Other Components in Red Reishi Mushroom:

Red Reishi contains vitamins such as:

Red Reishi contains minerals such as:

Red Reishi contains phytochemicals such as:

Sterols isolated from the Red Reishi include substances such as:

Red Reishi contains enzymes such as:

Other substances, elements and metalloids in Red Reichi include substances such as:

Red Reishi Mushroom Is An Adaptogen

Adaptogens or adaptogenic compounds are terms that are used for herbal remedies like medicinal mushrooms (Chaga, Red Reishi etc.), herbs, or other compounds that can for example:

Therefore, to be classified as an adaptogen, that certain plant must meet 4 criteria:

Red reishi is an excellent adaptogen that improves and balances the normal functioning of all body systems (13, 14, 15, 16). 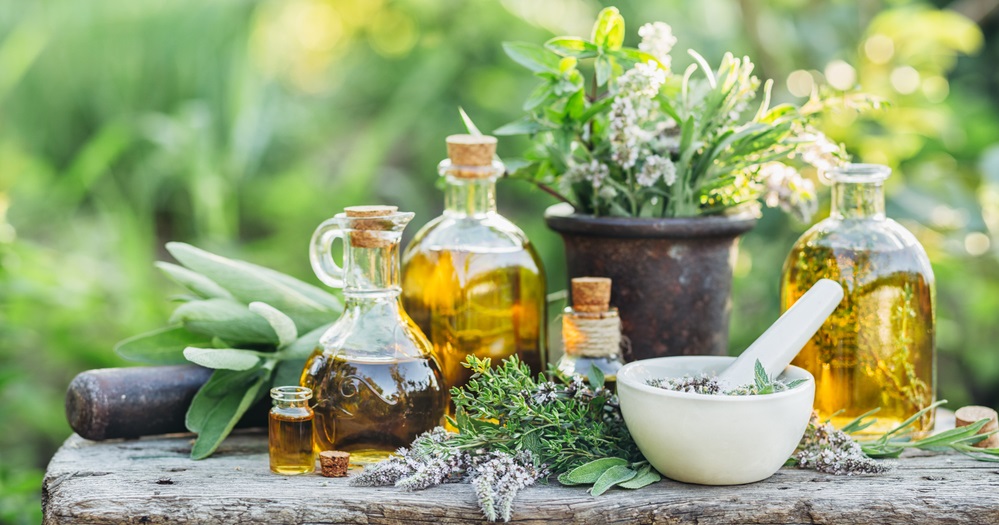 Adaptogens have been used and deeply respected by ancient cultures for thousands of years, and there are at least 70 types of herbal plants that are considered as adaptogens. However, all of them have not been thoroughly studied. Some of the most popular adaptogens include for example:

In nature there are 6 types of Reishi, but Red Reishi (Ganoderma lucidum), is the most studied one and possesses the strongest medicinal effects (12).

Reishi has been used in Chinese medicine for thousands of years, for instance, to calm the mind, relieve cough and asthma, reduce insomnia, dizziness, anxiety, and to to increase the so-called shen (which in Chinese medicine is the connection of heart and mind – the channel of spirituality). Red Reishi is said to sustain life, increase life expectancy, promote health and balance body functions without side effects.

It is used also for Alzheimer disease, cancer, diabetes, and cold sores. In Japan, Reishi dry extract is included in the official list of antitumor drugs. Although research is still ongoing and most evidence is based on animal studies, there is reason to believe that the beneficial effect of Reishi on humans is similar.

1. Red Reishi For Cancer Treatment – Reishi Mushroom May Have an Anti-Cancer Effect

Numerous studies have demonstrated that polysaccharides and triterpenes, the two major groups of components in the mushroom, show chemopreventive and/or tumor cells destroying effects. However, more evidence from well-designed human trials is still needed (7, 10).

There is considerable evidence to support the immune system stimulating properties of Reishi via induction of cytokines and improvement of immunological effector. For example, in animal studies, different components from Reishi have proved to enhance the proliferation and maturation of:

Although researchers do not fully understand all the mechanism, different extracts and solutions from Reishi have shown inhibitory effects on:

Several in vitro and in vivo animal studies have demonstrated that different extracts from Reishi may possess an antibacterial and growth-inhibitory effect on bacteria such as:

Even more, in one study Reishi was found to be more successful than antibiotics against E. coli, Salmonella typhi, B. cereus, Micrococcus luteus, S. aureus, and Proteus vulgaris, but less effective against some other species researchers have tested.

Nonetheless, Reishi provides a potentially effective treatment, and combination therapy may be more safe and cost effective, as smaller amounts of antibacterial and antiviral medicines could be used with a related decrease in the risk of side effects. However, this needs further investigation (7).

Fungi, particularly contained in Reishi mushrooms, promote nerve growth and stimulate communication between the neurons in the brain. Studies have proven that Reishi mushrooms can help in protecting the brain against seizures, and serve as a regenerative therapeutic agent for the treatment of neurodegenerative diseases associated with cognitive decline (23, 24).

Several animal studies have found that extracts of Reishi have a potent hepatoprotective effect on liver injury (7, 10).

In addition to its effects on chemical-induced liver injury, the benefits of Reishi on gastric injury have also been investigated. Researchers found that Reishi extract significantly accelerated the ulcer healing, and restored mucus and prostaglandin levels in gastric ulcers induced rats compared with the control group (7).

Some preliminary studies have demonstrated that Reishi may lessen fatigue, neurasthenia and depression as well as improve quality of life in people with certain medical conditions. Neurasthenia is a condition described by lassitude, fatigue, headache, irritability, and emotional disturbance (18, 19).

Although evidence is weak, and it may interact with other medications, Reishi mushroom may help lower blood pressure, and is listed as an herbal remedy for high blood pressure (hypertension) in Mount Sinai Hospital page (10, 21).

Although more research is needed, according to some sources Reishi also possess numerous other health benefits such as:

NB! Reishi mushroom does not directly cure diseases, but strengthens the immune system and your body begins to fight itself. Oriental medicine does not focus as much on disease and the invention of medicines as the Western medicine, but on how to maintain and strengthen health, so the Red Reishi mushroom is the kind of plant that is taken for prevention of diseases – to be healthy and not get sick.

Does Red Reishi Have Side Effects?

According to the literature, the Red Reishi mushroom is classified as a “superior” plant. Superior plants are said to be non-toxic, can be consumed in large quantities, for a long time and have no side effects.

However, in very sensitive individuals, some side effects may occur such as:

Luckily, some side effects are usually a positive sign that the mushroom is working. Above all, this is normal considering today’s eating habits and the accumulation of residues and toxins in the body which start to move when consuming Reishi. However, these symptoms usually disappear after continuous use of Reishi mushroom.

Can Red Reishi Mushrooms Interact With Other Medications?

Reishi is a natural dietary supplement that can be taken with medicines, but in some cases, it may interact with some drugs. For instance, some sources claim that Reishi has moderate interactions with at least 73 different medications, and mild interactions with at least 78 different medications. Therefore you should consult with a qualified therapist or doctor before taking Reishi in any form (10).

When consuming Reishi, you should be cautious with these combinations: