The prevalence of attention deficit hyperactivity disorder (ADHD) in children and adolescents is globally on average 5 percent, and among adults, between 2,58 percent (persistent adult ADHD) and 6,76 percent (symptomatic adult ADHD).

This neurodevelopmental disorder is one of the most often diagnosed childhood psychiatric disorders that starts in childhood and may persist into adolescence and adulthood.

The main symptoms of attention deficit hyperactivity disorder include inattention and hyperactivity (impulsivity). Often these symptoms go hand in hand with other neurodevelopmental conditions, such as intellectual disability and an autism spectrum disorder.

Due to the fact that many adolescents and adults with the disorder demonstrate antisocial behavior as well as criminal actions, ADHD has been growingly considered a serious social issue.

The first-line medications in the treatment of ADHD are stimulants. Though adolescents and adults with ADHD have a higher risk of substance abuse, and substance use disorder is one of the most frequent coexisting psychiatric disorders among this group of patients. Other unwanted side effects of taking stimulants may include insomnia, cardiovascular issues, appetite loss, hypoevolutism (retarded development), gastrointestinal problems, and tics.

Here in this article, we discuss ADHD symptoms, causes, and risk factors as well as some natural remedies such as certain supplements for managing ADHD symptoms (14, 15, 16).

ADHD symptoms are classified into two kinds of behavioral issues:

Numerous people with this condition have symptoms that belong to both these categories, but not all the time. For instance, about 2 to 3 in 10 people with ADHD have difficulties with focusing (attention deficit or ADD), but not with hyperactivity or impulsiveness.

Girls may mostly have signs of attention deficit (ADD) only and they may not express disturbing behavior that makes ADHD symptoms more apparent and obvious.

Therefore, ADHD is more often diagnosed in boys than girls. This also means that girls with ADHD may not all the time be diagnosed.

Mostly, the signs and symptoms of ADHD in children and teenagers are clearly defined and apparent or obvious before the age of 6. These symptoms (both inattentiveness and hyperactivity, or just one of these types of behavior) usually reveal themselves in more than one circumstance, for example, at school, as well as at home.

The Main Symptoms of Inattentiveness (Difficulty Concentrating and Focusing), Also Called Inattentive ADHD (Formally referred to as ADD) Are:

Therefore, a child with ADHD usually demonstrates a pattern of failing to finish tasks such as for example homework, chores, hobbies, or games.

The Main Symptoms of Hyperactivity and Impulsiveness, Also Called Hyperactive-Impulsive Type ADHD Are:

Some people with ADHD remain to have serious symptoms that may get in the way of daily functioning as they age, but some adults hardly have any symptoms. Numerous adult people with ADHD don’t know they have it — they just know that completing daily tasks can be more challenging for them than for other people.

ADHD Symptoms In Adults May Involve:

Although the precise cause of ADHD is not entirely clear, there are factors that may play a role in the development of ADHD:

For instance, some studies that has involved brain scans have proposed that specific areas of the brain may be larger in those with ADHD, while other areas may be smaller (2, 3).

Likelihood of having ADHD may grow in case of:

Attention deficit hyperactivity disorder has been associated with:

Related Conditions in Children and Teenagers With ADHD

Sometimes, some conditions or problems may accompany with ADHD in children and teenagers, such as: 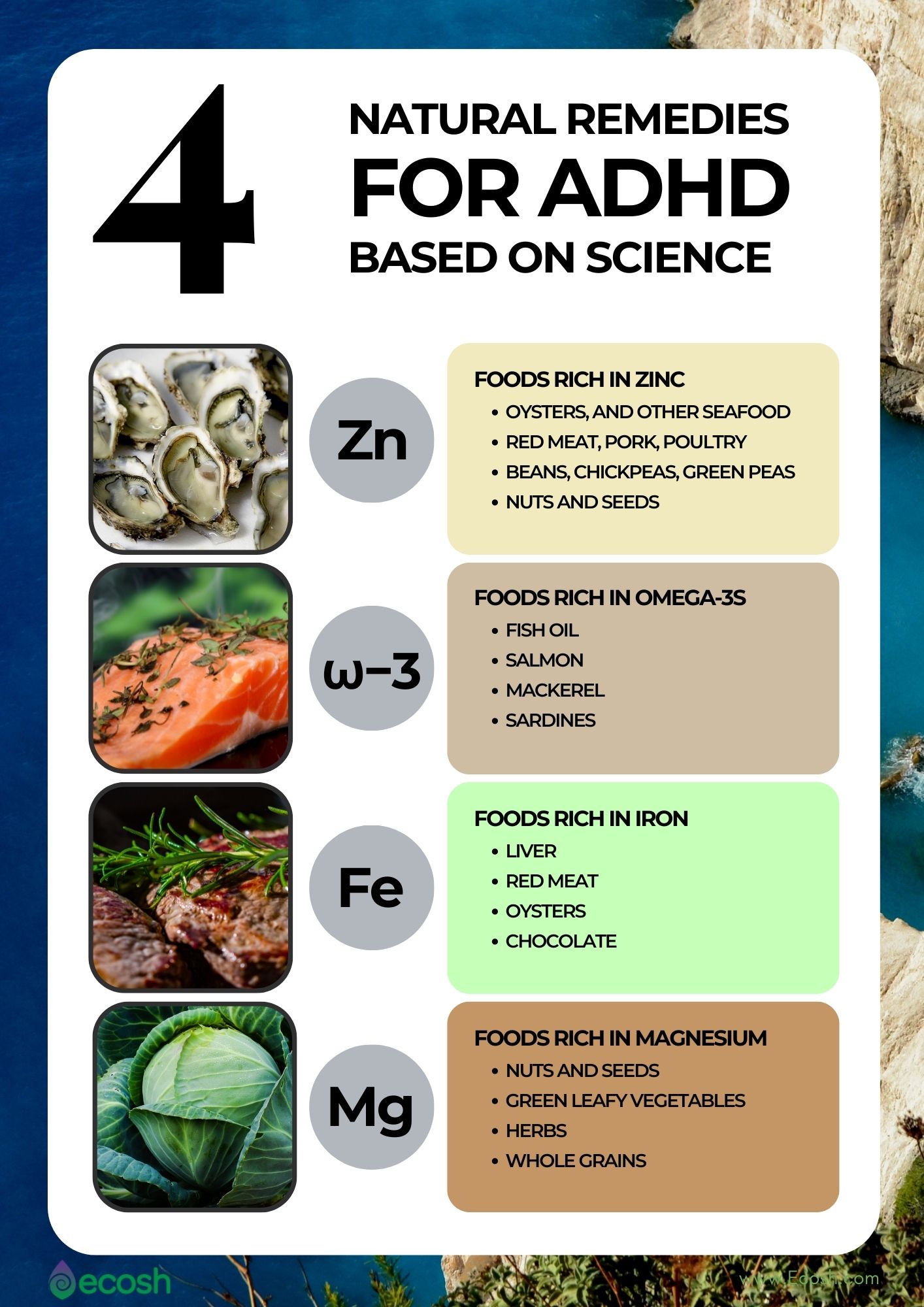 4 Natural Remedies For ADHD – Foods, Vitamins, Minerals And Other Supplements For ADHD

Several studies propose that kids with ADHD may have decreased levels of zinc in their body. Therefore, some scientist suspect that there is a link between zinc deficiency and the severity of ADHD symptoms. According to some studies, children who took zinc supplements together with traditional ADHD treatment had an improvement in their symptoms. The only question what needs further investigation is the proper dosage of zinc in case of ADHD.

On the other hand, several other studies have demonstrated that there is a drop in symptoms like hyperactivity and impulsivity after taking zinc supplements, but no notable changes in inattentiveness, which is also one of the key symptoms of ADHD (4, 5, 6, 7).

Before supplementing, it is always better to first consult your doctor and measure the blood zinc levels, but according to S. Newmark it is safe to give your child 20-25 mg of zinc daily (10).

That said, eating more foods rich in zinc every day might be beneficial for children with ADHD, as it might lessen their symptoms.

It is noted that kids with ADHD have on average 38 percent lower blood levels of omega-3s than kids without the disorder. Fish oil contains omega-3 fatty acids, and there is quite sufficient evidence that omega-3 rich fish oil fish oil may help improve ADHD symptoms.

For example, children with ADHD who took omega 3 supplements every day for 4 months had less hyperactivity, inattention, disobedience, and hostility. In addition, taking omega-3 supplements improved their memory, spelling and learning.

What’s more, omega-3s may help kids with ADHD sleep better, and therefore be less fatigued during the day. Children who took omega-3s also improved their cooperating skills with others.

According to some studies children with the disorder may have low levels of iron. Iron though is vital for normal brain function. Therefore, some believe that supplementing with iron may lessen symptoms of ADHD. Though that hasn’t been proven.

However, as taking too much iron can be toxic (even deadly) it is important to first measure the iron blood levels (hemoglobin, hematocrit and especially ferritin that is usually low in children with the disorder (22 in contrast to 44 in children without the disorder), so consult with your doctor before giving any iron supplements to your child.

S. Newmark suggests supplementing with iron if the ferritin level is less than 30, and first use 30-40 mg of elemental iron a day. Then measure the level of ferritin again in 3 to 6 months (4, 10).

However, your child eats foods high in iron you should monitor that the upper level of safe iron is not exceeded.

It is outlined that diet can play a notable role in the etiology of attention hyperactivity disorder, and the lack of magnesium can help to unfold hyperactivity in children. Although magnesium does not have a direct impact on improving attention, it may soothe hyperactivity and agitation, which both jeopardize attention.

Newman says it is safe for the child to take 100-300 mg of elemental magnesium twice a day. The magnesium can be in the form of glycinate, citrate, or chelate. However, he adds that the citrate form may lead to loose stools (10, 12).

Other Natural Supplements For ADHD

Ginkgo biloba has been used to better functions related to cognition for centuries. Preparations made from this herb may relieve conditions like depression, autism, neuropsychiatric symptoms such as anxiety, as well as influence the cognitive and behavioral aspects of ADHD.

Therefore Ginkgo has been used also in the treatment of ADHD. The primary behavioral effects of Ginkgo biloba are calming, so this herb may improve irritation tolerance in people with the disorder. Ginkgo biloba may also promote willful cognition, attention and lessen irritability.

Although few small studies (one of these done with the combo of American ginseng and Ginkgo leaf) have shown that Ginkgo may be helpful in children with ADHD in improving attention, and ginkgo preparations are used in the treatment of ADHD – no systematic reviews on its safety or efficacy have been published (10, 14).

Therefore, as the evidence of its efficacy is open to more than one interpretation, before taking any preparations, first consult your doctor.

Although this natural hormone does not seem to help with ADHD symptoms, it may help relieve sleep problems in children with the disorder who take certain medications.

Although low levels of GABA are linked with ADHD, there is too little research on treating the disorder with GABA supplements.

Inositol is a substance found in extremely small amounts in many foods. Some believe that in concentrated doses, it may help against agitation and anxiety. However, the efficacy and safety of inositol in the treatment of ADHD has not been proved.

These both belong to Ayurvedic medicine, and have been used in ADHD treatment, but there is still too little research on their efficacy and safety done in western medicine.

Despite the fact that St. John’s wort may affect brain chemicals, and is used to treat anxiety, sleep problems, and depression – researchers don’t suggest using it for ADHD treatment, as research has not shown effect on the symptoms of ADHD (4, 10, 14).